Photo by Joe Raedle / Getty
Weston Rice drives through a flooded parking lot at the Haulover Marine Center before the arrival of Hurricane Dorian.
Miami Beach is known across the world for its colorful art deco hotels, boozy party scene, and, on a less fun note, sunny-day flooding. In recent years, dozens of international publications, from Vogue to the New Yorker, have written about how the city — which was basically built on a sandbar — experiences extreme flooding during king tides, when the moon is closest to the Earth.

To combat the problem, city leaders over the past several years have raised streets and installed stormwater pumps to remove standing water from the roads. But during periods of severe weather, it's still common for Miami Beach to become more or less impassable due to flooding.

That sure seems to be the case today. As the state readies itself for the arrival of Hurricane Dorian, South Florida is also experiencing king tides. Photos of flooding in Miami Beach are being widely circulated across social media, showing the streets under deluge:

When #HurricaneDorian makes landfall in Florida, current projections show the powerful storm could come ashore during one of the season’s highest tides of the year — a king tide.

A view from the canal behind my North Beach apartment today ... not looking too good. https://t.co/OBCEmJHB5N pic.twitter.com/u2QmAtwlib 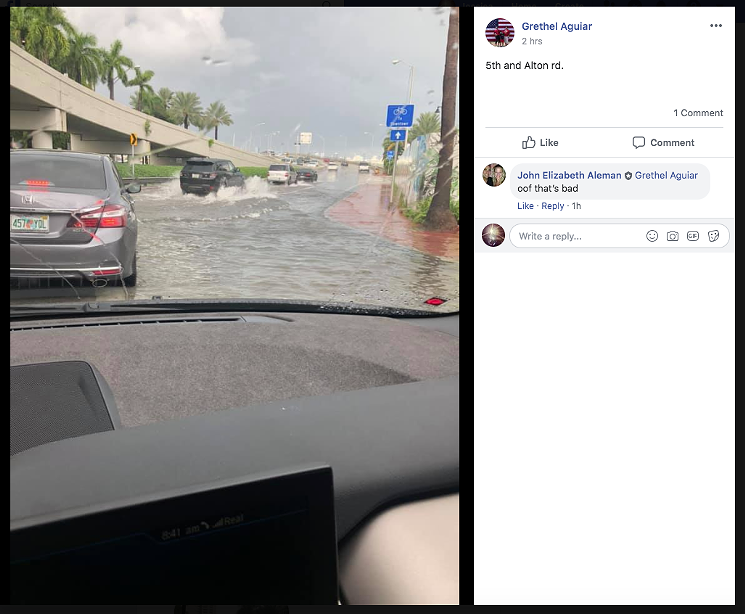 Miami Beach this morning ... #DorianHurricane May God bless everyone, get safe and have a plan! pic.twitter.com/0Mnwm7vR8w

"It's not raining and I'm standing in 6 inches of water just based on a king tide and some minor rain," she wrote on Facebook. "Imagine how these neighbors must be concerned about flooding and evacuation for a tropical storm or hurricane."

In an email to residents this afternoon, Mayor Dan Gelber said the city is installing 13 temporary stormwater pumps and 18 portable generators at pump stations to provide back-up power.

"We nonetheless should expect to see some flooding due to the combination of king tides and Hurricane Dorian's significant rainfall and potential storm surge," Gelber advised.

So far, meteorologists say flooding in the area could be severe depending upon Dorian's track:


As an example here’s Miami’s Virginia Key water level predictions (using it only because it’s readily available to me via @BMcNoldy and not because I’m forecasting it to come to #Miami). Basically it’s “shoulder King Tide season”. Labor Day is 2 Sept


As of the most recent, 2 p.m. advisory from the National Weather Service, Dorian is projected to be a major hurricane and a "significant threat" to the Sunshine State. The storm is expected to approach the Florida peninsula late Monday.