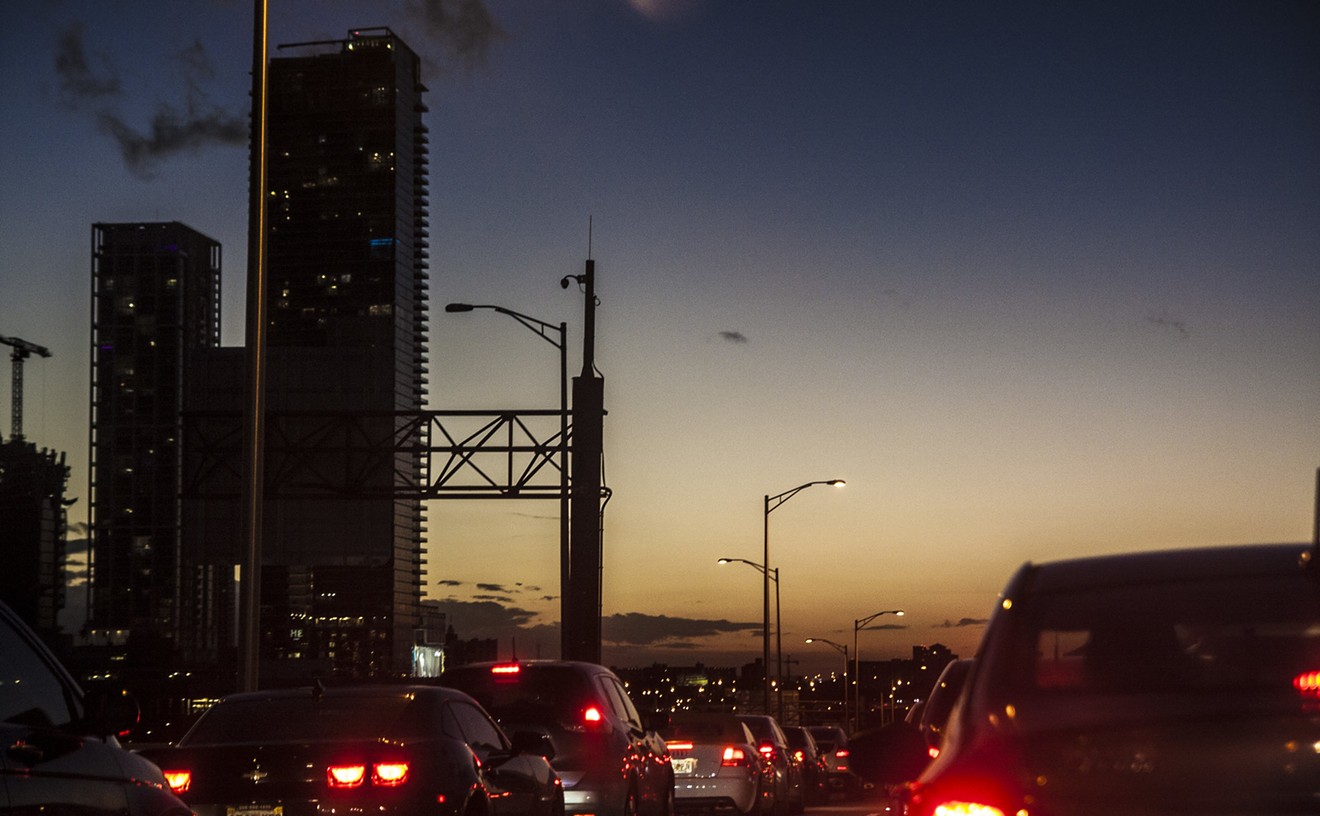 Photo by Michela Grusso / Flickr
Miami traffic jam.
What do you call someone willing to face more than three hours of Miami gridlock five days a week? Crazy? A masochist? Well, take a look at how much these people earn, and you might just change your mind. Along with being home to green iguanas and right-wing conspiracy theorists, South Florida also happens to have a growing number of long-distance commuters. That's according to a recent analysis of U.S. Census data and commuting patterns by Apartment List.

Traveling more than 90 minutes each way to their day jobs, the number of "super-commuters" in the metropolitan area of Miami, Fort Lauderdale, and West Palm Beach has exploded in recent years, increasing by 35 percent between 2005 and 2017. Nationwide, super-commuting grew by more than 30 percent in that period. In Miami-Dade County alone, there are nearly 33,000 of these commuters.

According to the report's authors, super-commuters aren't off their rockers; they're just willing to follow the money — namely, in big cities. With rent and the cost of living in large cities skyrocketing in recent years, many workers have been priced out of living close to the office despite their well-paying jobs. In the case of Miami, affordable housing has been crowded out by a seemingly endless flow of high-cost, largely uninhabited condos. So instead of taking a lower-paying position closer to home, super-commuters brave more traffic for a larger paycheck. In 2017, super-commuters made 7 percent more than Floridians with more normal, less hellish drives to work. Super commuting and telecommuting leads to higher salaries compared to more regular drives to work.
Image by Apartment List
As impressive as the growth in super-commuting has been in recent years, it's got nothing on remote work. In the South Florida metropolitan area, the number of telecommuters — folks with full-time jobs who work from home — more than doubled between 2005 and 2017, vastly outpacing the nationwide trend. As of 2017, 5 percent of all workers in the area were using their homes as offices. The median income for remote workers was $54,000 in 2017, 28 percent higher than "normal" commuters who earned a median income of $42,000 that year. Unlike super-commuters, who tend to cluster on the outskirts of large metropolitan areas, remote workers tend to be closer to midsize cities. Nationwide, the most common telecommuting jobs include freelance designers and public relations workers, followed by therapists and chiropractors who work out of their homes.

Last year, Miami-Dade commissioners voted to begin investigating the prospect of building "telecommute centers" in the southern and western parts of the county in an attempt to mitigate the area's mind-numbing traffic. The county voted for a similar study in 2006 but found there were not enough workers in a position to make use of a telecommuting center.