Karli Evans
See more photos of Carly Rae Jepsen at the Fillmore Miami Beach here.
At any given moment during Carly Rae Jepsen's show at the Fillmore Miami Beach, the singer looked like a young Shirley MacLaine, her blonde hair practically fixed in place as she bounced from stage left to stage right. Whether in a bejeweled bodysuit covered in faces or a short, fruit-emblazoned dress with hot pink fur around the wrists and neck, Jepsen was a radiant presence with the ability to switch from joyous tunes to melancholic ballads in an instant without losing sight of the warranted emotion.

Jepsen's message isn't too complex: She's an artist who sings about love, heartbreak, friendship, and self-care, delivering pure joy and relatable lyrics through pop music — and damn good pop music it is, lifting every single audience member off their feet from the very first song ("No Drug Like Me"). To say the crowd — heavy on millennials who knew every single word to the tracks she performed — was intoxicated by the Canadian pop-star is no stretch of the truth.

The stage, sparsely designed but gorgeously lit, was populated by Jepsen, a band of four, and two back-up singers, all of whom seemed to be as swept off their feet by the singer as the audience. While the singer performed one of her most frivolous tunes, "Store," her keyboardist (who doubled as the saxophone player for hits like "Run Away With Me" and "Let's Get Lost") bounced higher than any of the fans present. He passed that energy on to his bandmates who laughed along with the crowd as the lyrics, "I'm just going to the store, to the store, I'm just going to the store" filled the venue in a warm sing-a-long. 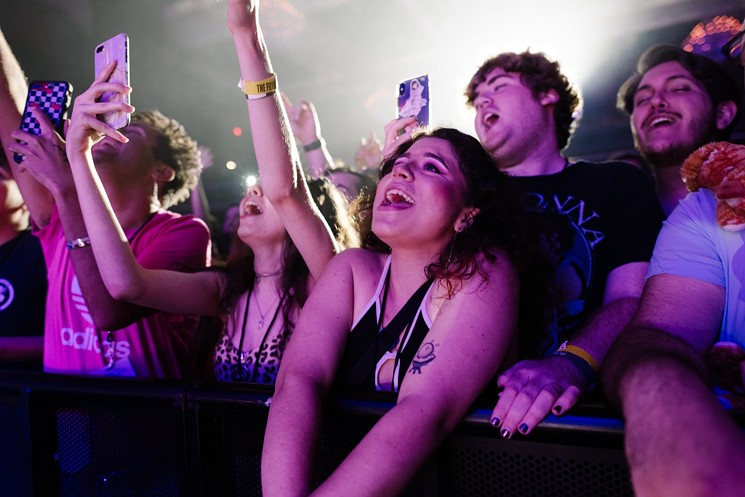 See more photos of Carly Rae Jepsen at the Fillmore Miami Beach here.
Karli Evans
Her crowd of fans, having been pumped up by opener Phoebe Ryan (herself an upbeat welcome presence, spinning and dancing in a floor-length sheer robe), needed no invitation to join the artist in singing and dancing along to everything from her biggest hits ("Call Me Maybe" and "I Really Like You") to B-sides and songs from her new album, Dedicated ("Fever" and "Want You In My Room"). Cruising through 22 songs at a show never felt quite so good. Even a costume change became a party when the band impressively turned "For Sure" into an extended disco-inspired remix, subtly mixing in music and lyrics from new album bops like "Party For One," "Too Much," and "Julien."

The disco influences were apparent not only in the music, but in so much of the show's design itself, from the spinning disco ball that occasionally lit up like the last dance on prom night to the rectangular neon lights and matching LED screens that served as a backdrop for most of the show. Each song featured its own unique light show, with some embracing the blues and pinks that many refer to as "bisexual lighting" and others aiming for warm and appropriately beachy peaches and lovely lavenders that coated the black-and-white stage.

See more photos of Carly Rae Jepsen at the Fillmore Miami Beach here.
Karli Evans
Jepsen coupled certain numbers with videos and short, on-the-nose tales that led into song titles rather amusingly. Some were simple, animated sequences meant to provide appealing background noise, while others were custom-designed for their respective songs. Where the music video for "Run Away With Me" features Jepsen running through different cities, her background videos for the show similarly featured gorgeous time-lapse videos of different locations. "Too Much" found her and her music video body doubles dancing and singing along like clones. The design for numbers like these almost makes one wish she'd injected "Everything He Needs" with videos of Shelley Duvall in Popeye (as Jepsen's song is a loose remake of the film's tune "He Needs Me").

Choreography — almost Fosse-like in its limited but purposefully-scripted movement — occasionally came into play with numbers like "Gimmie Love" and "Want You In My Room." But for the most part, Carly Rae Jepsen played things fast and loose. She could do anything on that stage — scream while stomping to express frustration during "Boy Problems," shoot confetti throughout the Fillmore as her fans lost their minds to "Cut to the Feeling" — and the whole room went along for the ride.

She's a long way from Quebec City (where the titular "Julien," whom she dated for three months and hopes doesn't call her, lives), but she was right at home in that room of hundreds of fans on South Beach, ready to dance the night away if only just for an hour and change.