Miami's Best Eats and Drinks This Week: Best of Miami Party and What the Cluck 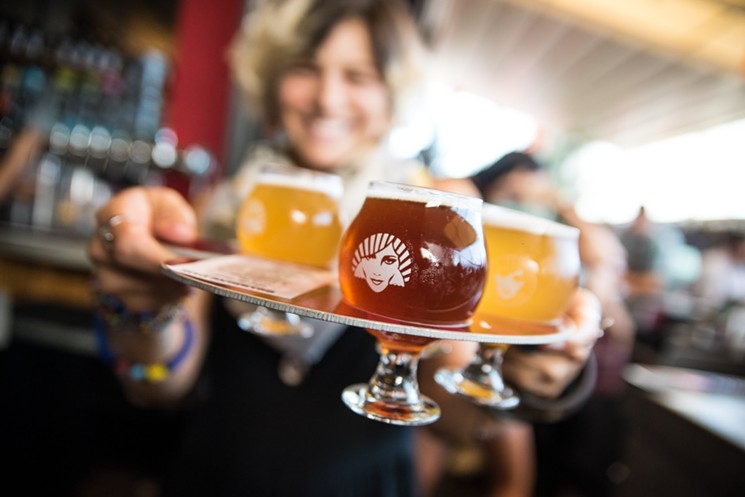 A flight of beer at Concrete Beach is just the beginning.
Amadeus McCaskill
Wynwood Comedy Throwdown at Concrete Beach Brewery. Test your comedic timing at this open-mike night. Sign up to channel your inner Stephen Colbert or Dave Chappelle. At the end of the show, audience members will vote on their favorite comic of the night. The winner gets a free growler fill to take home. This is a great opportunity to see established comics working out their material, fresh faces, and first-timers. 8 to 10:30 p.m. Tuesday, June 18, at Concrete Beach Brewery. 325 NW 24th St., Miami; 305-796-2727; concretebeachbrewery.com. Admission is free.

Photo by Karli Evans
Stephen's Deli Reopens in Hialeah. This Wednesday — a year and a half after it closed for renovations — Stephen's Deli in Hialeah will reopen in the same location with the same vibe. At the upgraded 3,000-square-foot eatery, Stephen's will feature its original chairs, tables, and signage framing the entrance. Also, the kitchen's footprint was reduced to add La Cocina, a 40-seat bar that will debut this summer. The menu — including egg salad sandwiches ($10.95), NYC pushcart hot dogs served tableside, and the Lokal burger ($13.95) — will be an expansion of the offerings at the Stephen's Deli stall at Time Out Market on Lincoln Road. The shining stars of the menu, however, are the hand-cut pastrami and corned beef sandwiches, served on rye or challah and garnished with a Ba-Tampte pickle ($14). Wash down your sandwich with a classic New York egg cream ($5) — a tall glass filled with milk and chocolate or vanilla syrup and topped with soda water. Although the restaurant won't serve cocktails at this time, Stephen's will offer an option to make your egg cream boozy (and will also serve a proper Irish Coffee for dessert). 1000 E. 16th St., Hialeah; 305-887-8863; kushhospitality.com. When it opens June 19, hours will be 11 a.m. to 5 p.m. Monday through Friday and 8 a.m. to 5 p.m. Saturday and Sunday. When La Cocina opens, Stephen's will offer its menu later.

Celebrate the Best of Miami June 20.
Photo by Jorge Martinez Gualdron
New Times' Best of Miami Party. New Times' annual Best of Miami edition dropped last week with hundreds of picks for the best things to eat, see, and do in the Magic City. To honor this mega-issue, we're throwing a party this Thursday in the Design District's Jungle Plaza. Enjoy cocktails and bites from some of Miami's favorite restaurants, circus acts, and other entertainment. 8 to 11 p.m. Thursday, June 20, at Jungle Plaza, 3801 NE First Ave., Miami. Tickets cost $45 via newtimesbestofmiami.com and $60 at the door.