Spinello Projects Reopens in Allapattah With "Within Time"

Spinello Projects
Eddie Arroyo's May 17th, 2019, 7:19 PM, 2019.
This past Sunday in Miami's Allapattah neighborhood, amid rain and traffic congestion, one of the city's best-known galleries reopened. Anthony Spinello is the name behind Spinello Projects, a contemporary art venue that for the past couple of years has specialized in work representing marginalized communities, with a deeply political bent. His new space is located on the second floor the Gesamtkunstwerk Building, on the corner of NW Seventh Avenue and 29th Terrace, and is hosting the inaugural exhibition "Within Time."

The title of the show is not just a reference to the displayed works by Eddie Arroyo and Agustina Woodgate on the occasion of their participation in the Whitney Biennale. It's also a nod to the local gallery that has blossomed from its humble roots, in a Midtown Miami apartment building in 2005, into an internationally recognized hub of talent.

"My gallery practice has been quite nomadic," Spinello says. "To date, I have set up shop in ten spaces within Wynwood, the Design District, Upper Eastside, and Allapattah."

Walking through the bougainvillea-covered entrance, guests come upon a narrow set of rickety steps leading to a landing displaying a large-scale acrylic piece by Arroyo that highlights the community's resistance to Little Haiti's gentrification. The piece comes from Arroyo's series Developer's Survey as an ongoing conversation between Miami and New York featuring communities in both locations as they face increasing socioeconomic challenges. The piece addressing Little Haiti feels especially relevant — it not only welcomes guests to the new space but also is exhibited in a gallery once located at the gentrified border of the very same neighborhood. It shows the gallery is not unaware of the effects of gentrification in Miami and elsewhere.

Installation view of "Within Time."
Photo by Diana Larrea, courtesy of Spinello Projects
"I've actually moved back to Allapattah within the same building I had my gallery in from 2012 to 2015," the gallerist explains. "Nonetheless, Allapattah is not a gentrification-safe zone. It's been going through a similar process of gentrification like Little Haiti, Little Havana, downtown, and others."

One of Arroyo's pieces directly tackles the activism that's taken place around cultural institutions, addressing the membership on museum boards of directors and the sources of institutions' funding. Whether it's the Guggenheim's involvement with the Sackler family, which has come under scrutiny for its ownership of Purdue Pharma — the company that marketed and sold OxyContin — or the Whitney Museum's vice chairman, Warren B. Kanders, who owns a manufacturer that supplied tear gas used by U.S. immigration and customs officials to subdue migrants at the southwestern border, museums have been put on notice.

Moreover, Woodgate and Arroyo signed an open letter calling on the Whitney to remove Kanders. Asked about their participation in the same institution's lauded biennale, Woodgate said, "These events become avenues for bringing the institutional politics forward, uncovering the level of entanglement through which cultural production is ruled by today. It is not about participating or not, but how we participate that matters." 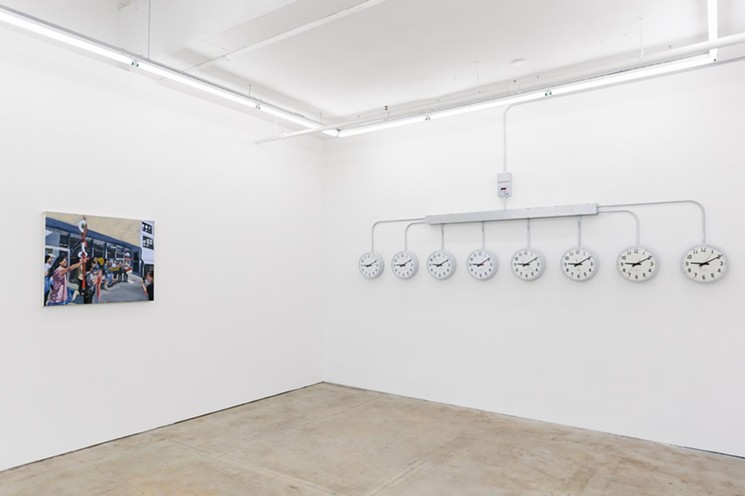 Installation view of "Within Time."
Photo by Diana Larrea, courtesy of Spinello Projects
In the current exhibition, Woodgate is exhibiting Work Out, a wall-clock sculpture from her series National Time. The piece consists of a network of eight synchronized clocks representing an eight-hour workday. The hands of the clocks are lined with sandpaper that slowly scrapes away the numbers as time passes. It's meant as an allegory to what Woodgate refers to as the "master/slave" relationship that schools, offices, factories, and other workplaces have used since the Industrial Revolution to prop up institutional structures.

"Within Time" marks the return of one of Miami's most promising local galleries and comments on the tumultuous climate for the arts at large. After years of programming large gallery shows, as well as coordinating projects outside the space such as last year's art fair Free!, Spinello is streamlining and simplifying by going back to his roots. If past success is any indication of what's to come, his new home will be filled with of-the-moment pieces imbued with a woke sensibility.