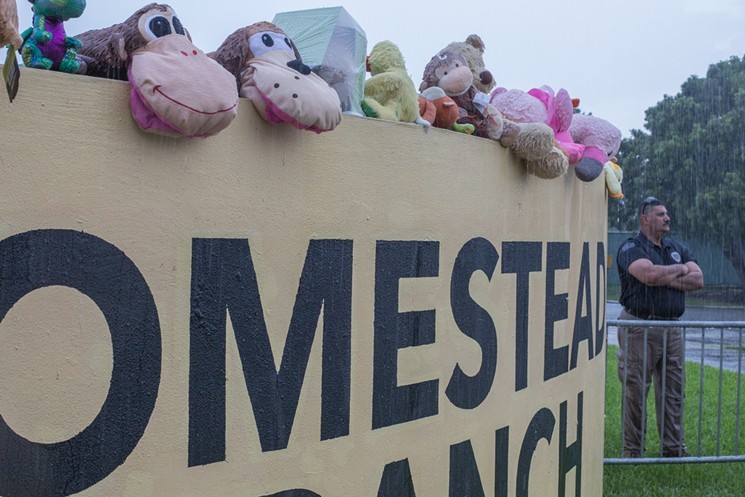 Now activists say they plan to once again march and demand the federal government shut the facility and move children to live with sponsors or in significantly more humane facilities. On June 16, a team of activists will demonstrate outside the camp's main entrance on Bougainville Road in Homestead. More than 100 people on the march's Facebook page have said they plan to attend.

"Most of these children have fled violence and poverty in Central America and are seeking asylum in the United States. Many were separated from their family members or relatives after crossing into the U.S.," the activists wrote online. "But instead of being released to family members or other sponsors in the community to await hearings on their cases, many of these children will spend weeks or months in detention — with lasting traumatic effects."

The demonstration — one of 16 immigrant-rights protests set to happen nationwide that day — will be at least the second large-scale action outside the facility since New Times reported last year that the Trump administration had reopened the facility and, at the time, placed as many as 1,300 kids there. (Now the federal government is in the process of filling the camp with as many as 3,200 children.) Almost exactly a year ago, hundreds of people marched in the rain outside the facility to demand the U.S. Department of Health and Human Services' Office of Refugee Resettlement move the kids out of the compound.

That did not happen. Instead, the federal government has added more bodies to the facility as human-rights activists have lodged further complaints. The Southern Poverty Law Center has sued, claiming kids are being kept inside the facility longer so Immigration and Customs Enforcement can hunt down adult immigrant sponsors and deport them. Legal advocates have alleged that some children have been kept inside the facility for longer than 140 days, that some girls are depressed and cutting themselves, and that children live in fear they will be kept at the camp longer if they misbehave. If children turn 18 there, they are handcuffed on their birthdays and sent to adult ICE detention facilities.

Protesters are also upset that the facility is operated by a private contractor, Caliburn International, which employs former Homeland Security director John Kelly.

"Now is the time to stand in solidarity with children from Central America and other parts of the world who are seeking safety and peace," the activists said on Facebook. "Please join our End Child Detention Coalition, elected officials, immigrant advocates, communities of faith, activists holding daily vigil, and many others in demanding the shutdown of Homestead Detention Center!"