Photo by Frank Diaz
An encampment for sex offenders on NW 48th Street in Brownsville.
Ever since the Julia Tuttle Causeway became an encampment for sex offenders more than a decade ago, officials have been trying to shoo the group away from the rest of civilization. Thanks to stringent requirements mandating that child predators live 2,500 feet from schools, parks, and daycare centers, the offenders have struggled to find legal housing, leaving many effectively homeless. For years, the roving offenders have been shuffled from one place to another, angering unlucky neighbors and nearby business owners.

After a 2017 New Times report about unsanitary living conditions at the group's tent city near Hialeah, county commissioners booted the group. It split into smaller factions across the county; some members even left the state.

Now the county is preparing to break up a growing colony of sex offenders living on NW 48th Street in Brownsville. An official notice posted in the area says the state has declared the encampment a sanitary nuisance, and the county considers those living there to be in violation of Miami-Dade code. The county "will be forced to take appropriate enforcement action including, but not limited to, civil penalties and/or arrest" of those who do not vacate by June 20, the sign warns.

"They put up a notice saying, 'Kick rocks — you've got to get out of here.' The question is, to where?" says Frank Diaz, a local pastor who ministers to offenders at the camp.

Diaz says he and his nonprofit group, United We All Can, already care for homeless people in faith-based shelters across Miami-Dade. He'd like to further his outreach by dedicating an entire "restoration home" to displaced sex offenders.

"What we're asking is the county give us a place in an industrial area where it's away from parks, schools, and communities,” Diaz says. “We can build that place up and house them there. We'll minister to them, but the county's gotta help us find the property." 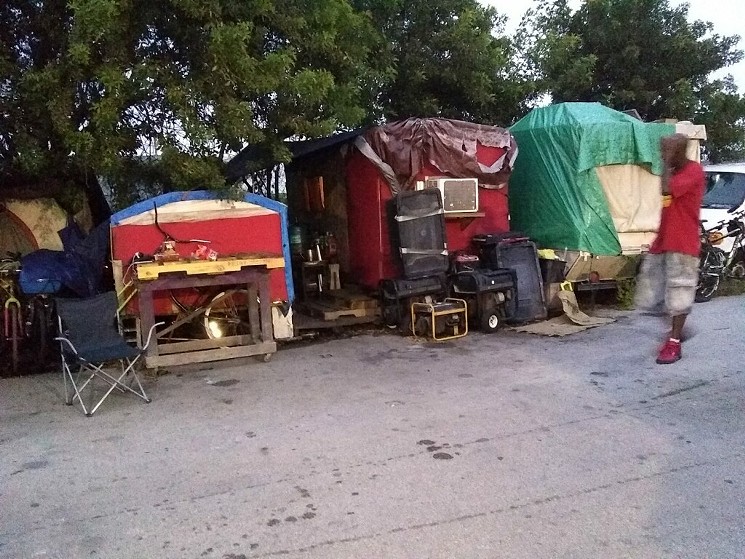 An encampment for sex offenders on NW 48th Street in Brownsville.
Photo by Frank Diaz
Ron Book, the ultrapowerful lobbyist who chairs the Homeless Trust, sees merit in the idea. It could help rehabilitate some sex offenders and make it easier for law enforcement and probation officers to keep track of the population.

"If somebody wants to build something away from the general population, we would certainly encourage that," Book says.

But he says he can't seriously entertain a proposal until it's fully fleshed out. And he's uncertain about using the Trust budget for such a project.

"Taking significant funds to fund the building or the renovation — you know, that remains to be seen as to my willingness to do that," Book says.

Without any clear direction on legal homes, the offenders now rely on word-of-mouth suggestions for places that fit the county's narrow criteria. Diaz says the law actually makes residents less safe in some ways because the sex offenders can't find steady housing or work.

"The only thing they're doing is getting angry," he says, "and what we want to do is restore them so they become productive and they don't recommit these types of offenses."

In the meantime, the group on NW 48th Street will be forced to find a new home, which, Diaz says, "is not a solution that works. They're just sweeping bodies under the rug and saying this is not a problem."