Yoshi for a Day: What It's Like Competing in Miami's Mushroom Rally

Photo by Daniella Mía
Mushroom Rally brings Mario Kart to life. See more photos from Mushroom Rally here.
K1 Speed in Medley, Miami, might be tricky to find at first, especially when you’re walking across the expanse of a giant, mostly-empty parking lot on a lazy Sunday afternoon. You may wonder for a second if you’re in the right place. But then you’ll round a corner and see two flags waving at you with the welcome promise of adventure. For two weekends this month, the indoor go-kart racing spot is the site of Mushroom Rally, an experience that brings Nintendo’s Mario Kart to life.

As a ‘90s baby, of course I’ve played Mario Kart before. I usually lose embarrassingly, but I love the characters and the magical worlds painted by the different race courses. (My favorite is Cheese Land. I wish it was real.) Today, I’m ready to see if I’ll fare better outside of virtual reality. Mushroom Rally, which is currently in the middle of a 16-city tour across the U.S., gives players the chance to compete in their very own Mario Kart-style race, and the stakes are high: The top performer in each city wins an all-expenses-paid trip to Las Vegas to compete in the championship. 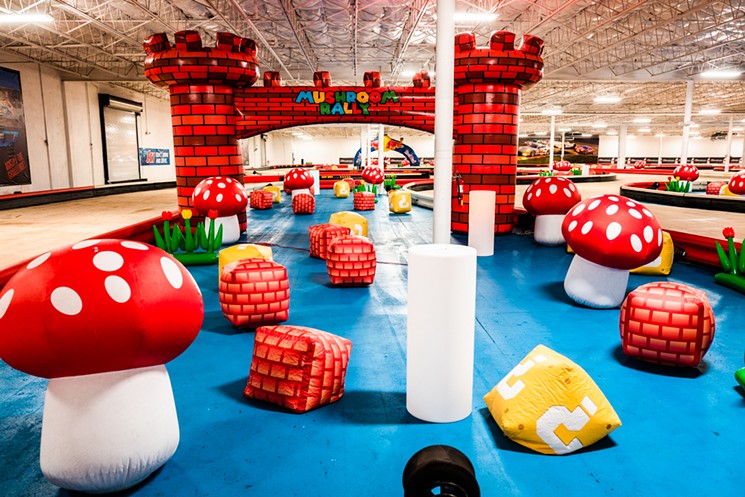 See more photos from Mushroom Rally here.
Photo by Daniella Mía
The door opens, greeting us with the sounds of laughter and pumping music. In a costume room near the entrance, you can choose from a variety of colorful outfits, instantly transforming yourself into your favorite character. Racks of onesies—bright yellow Bowsers, fuzzy Donkey Kongs, overalled Marios and Luigis—wait expectantly next to a long table of headpieces, from sparkly Princess Peach crowns to round Toad hats. I slip into a Yoshi onesie, and let the games begin.

After signing up for a race slot at the entrance to the event, there are plenty of other activities to keep you busy while you wait for your turn. As a DJ spins tunes, you can explore a variety of games and earn star stamps based on your performance. (The top three people in the country who collect the most stars will also go to Vegas.) There are ring and bean bag tosses, a mini-golf challenge, a giant velcro target to pelt tennis balls at, and one of those money-blowing machines, which is extra entertaining to watch when the participants are dressed as Mario Kart characters. Just like in the original video game, stars are planted around the space, waiting to be found and collected. 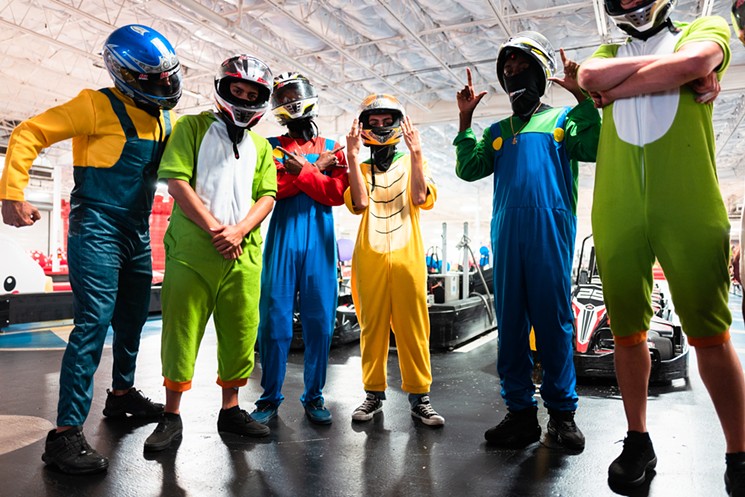 See more photos from Mushroom Rally here.
Photo by Daniella Mía
The racetrack is dotted with inflatable mushrooms, bricks, and flowers, and a large castle (though the loop you’ll actually be driving on is clear of obstacles). Racers speed around the twists and turns of the course as many times as they can for about 10 minutes, and the one with the fastest lap time wins. At the end of each day, the top 10 winners compete in a final race to see who will become that day’s champion. The fastest person in each city goes on to Vegas.

When it’s my turn to race, the DJ calls my group onto the track. I’ve never ridden a go-kart before, but a staff member gives us a quick tutorial, and makes sure everyone is properly buckled in and helmeted.

As we start to roll forward, I’m the first car out on the track, and for a few brief moments, I’m the leader, with the open road all to myself. But soon, just like whenever I play the video game, I quickly find myself falling behind. A guy in a pink Princess Peach dress whizzes past me, our cars bumping shoulders thrillingly as he flies by. After a while, another Yoshi laps me with a flash of bright green. 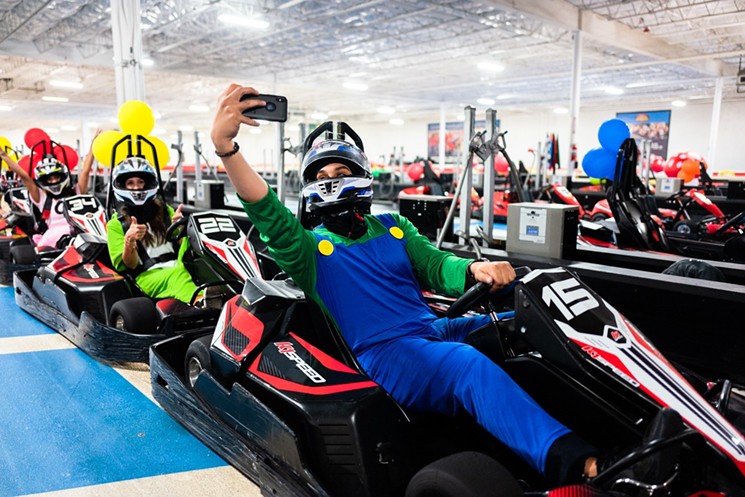 See more photos from Mushroom Rally here.
Photo by Daniella Mía
Still, it’s exhilarating and just plain fun to zoom around the course, speeding up to chase down a kart in front of you or outride someone on your tail, hugging the shoulder of the track as you make tight turns, feeling the rush of adrenaline and hearing the engines rev up around you. I press down on the accelerator and, for a second, pretend I’m a NASCAR driver (even though I would probably be the slowest NASCAR driver in the world). When we see a checkered flag waving, it means we’re on our final lap, and then our karts are all automatically slowed down. It’s time to get ready for the next round of racers.

I might not be anywhere near the fastest Yoshi on the course, but I do win a unicorn rubber duck from one of the claw machines in the venue’s arcade, and victory is sweet. I won’t be going to Vegas, but wearing my Mushroom Rally medal proudly as I exit the event, the sounds of the racetrack echoing in my ears, I definitely feel like a champion.