Danielle Margharette
Martha Valdes poses with her trademarked Cuban Bred design.
It’s a Saturday afternoon at the Fair Expo Center, and Martha Valdes is standing beneath a collection of palm fronds while neatly folding a T-shirt. She aligns one pile and adjusts a table accent so it all looks just right. After all, her name is on the large sign reading "Martha of Miami."

The 30-year-old clothing designer is expecting a large crowd to pass through her space at the annual Cuba Nostalgia event. At the entrance to the pop-up shop is a mannequin's torso wearing a white shirt with red and blue block letters spelling, "Cuban Bred." At an event filled predominantly with Cubans, Valdes’ corner is a surefire hit.

She finds a spot and takes a seat before speaking with New Times. The small-business owner began her Martha of Miami journey in 2015 after she accidentally paired an image of a pineapple with an image of a colada, the Cuban espresso drink served in a Styrofoam cup. “I saw the design come to life and thought it was genius. How has no one thought of this before?” she asked herself. That night, the famous "Piña Colada" shirt was born.

“I just knew I had to share this with people,” Valdes says. “And from there, my drive to be more creative and create some fun Miami designs grew. I started out with that one design and moved on to the 'Croquetas, Coladas y Cubanas' shirt, and from there my trademarked 'Cuban Bred' design.” 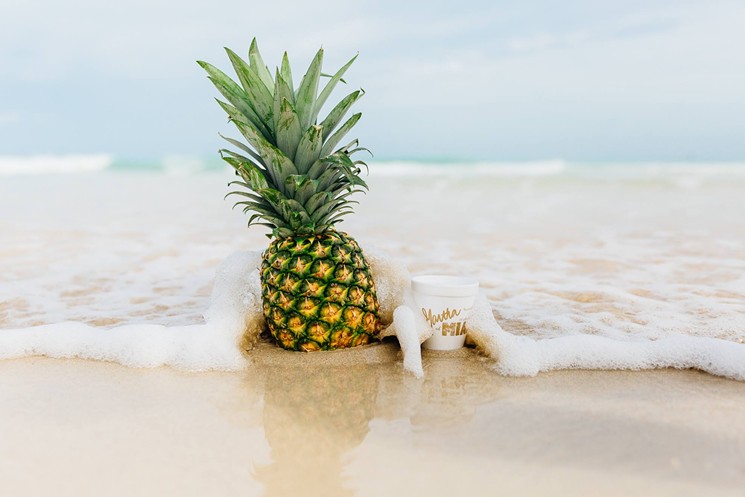 It all started with a simple pineapple.
Martha Valdes
Inspiration for her designs comes from growing up Cuban-American in Miami. It’s easy to see the influence her culture wields on the items she sells. Asked what it means to be Cuban, Valdes looks up and flashes a wide grin.

“Loud, loud, loud, and always with un plato con arroz y frijoles in front of you,” she says.

And, yes, there's a pair of arroz y frijoles socks on her website.

Although she's been selling her designs online for less than four years, Valdes has spent her life in the clothing business. Her father, Ruben Valdes, is the founder of the popular Valsan stores. After two years of splitting her time between working for the family business and starting her own, Martha Valdes decided it was time to choose.

“I was terrified of having to go tell my dad that I didn’t want to work at Valsan anymore,” she says. “It was hard to leave, but it was worth it.”

In the time since, Valdes has grown her presence on social media, with more than 26,000 followers on Instagram alone. She manages a table space at various events around the city and also handles daily online sales.

“I wanted to name my brand 'Martha of Miami' because the first store my dad opened was called 'Valsan of Miami,' so the name is like a nod to my father,” she says.

Another way she's walking in his footsteps is through her recent collaboration with Florida International University. In September 2018, Valdes set up a table at FIU’s Eighth Street campus and sold her officially licensed collegiate gear. Turns out her father also set up a table on the very same campus more than 35 years earlier.

“It was so surreal,” she says. “I don’t have the same struggles my dad did all those years ago, but to be able to say that I too sold at FIU just like him, that felt really great.”

The best way to start any day.
Danielle Margharette
One thing she’s learned throughout her many years in the clothing business is that people like to wear their culture loud and proud on their tees. “The more and more I searched, I found that there wasn’t enough Latino-inspired shirts in the market,” Valdes says. “The representation for Latinos was pretty much nachos and tacos. Somebody needed to represent our culture the right way.”

Her Martha of Miami designs are more than just shirts; they’re a way for Latinos to show off their cultural pride and feel included. In the middle of the interview with New Times, an older woman approaches the now-platinum-haired Valdes and asks if she's the Martha behind Martha of Miami. The designer nods and asks if she can help the shopper with anything.

“I just wanted to say thank you,” the woman says. “Thank you for doing everything that you do.”

Interactions like that one are a testament to the importance of representation — and how a simple shirt with a simple design can make someone feel seen.

If you ask the young entrepreneur what’s next for Martha of Miami, she shrugs. “If you would have told me four years ago I’d be doing this, I would have thought you were crazy and told you I’d be working at Valsan for the rest of my life.”

But now, Valdes says she sees the brand as having great potential. “It’s not just shirts; it’s representation. So the question I constantly ask myself is, What am I going to do next to represent my culture?”