But now Fuller says his own investigation has uncovered numerous code violations dating back a decade at Carollo's Coconut Grove home. This morning, Fuller and his business partner, Martin Pinilla of the Barlington Group, a Calle Ocho-based real estate company, held a news conference in front of city hall, where they presented what they say is photographic evidence of the commissioner's illegal building projects.

"People who live in glass houses shouldn't throw stones," Fuller said. "After months of attacking us with code violations... it turns out... Joe Carollo is a seasoned building-code violator."

Neither Carollo nor his chief of staff responded to emails from New Times seeking the commissioner's response.

Pinilla said Carollo has a "vendetta" against Pinilla and Fuller because the two endorsed Carollo's opponent, Alfie Leon, in the 2017 commission race. Since then, Carollo has been accused of staking out Ball & Chain late at night and yelling, "I am the law!" at an employee who confronted him. Fuller says Carollo repeatedly called in false code complaints on Barlington's properties; Fuller and Pinilla are now suing the commissioner in federal court.

Thursday's news conference is the latest chapter in the ongoing saga. Fuller and Pinilla told reporters they believe Carollo has committed multiple code violations at his home, including building three hurricane-unsafe carports, an unsafe rooftop deck, and an entrance arch and — most egregious, according to Fuller — cutting a mature and "historic" banyan tree on his property. 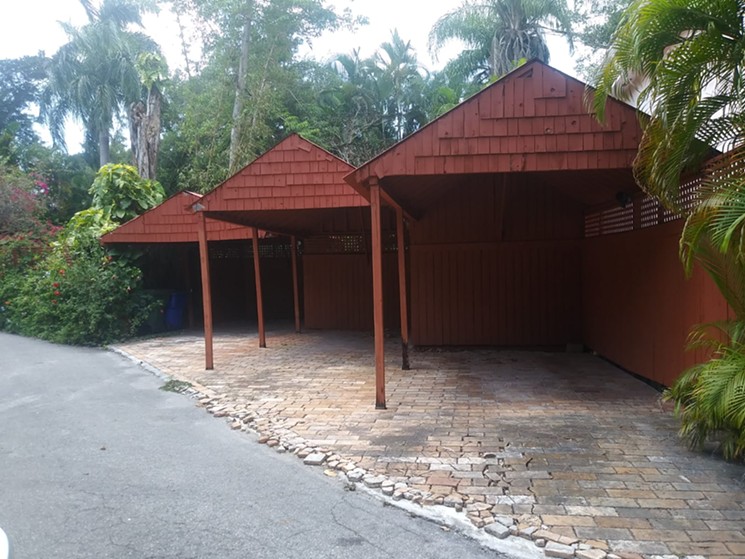 Commissioner Joe Carollo is accused of failing to pull permits for multiple projects at his house in Coconut Grove
Photo by Joshua Ceballos
Fuller and Pinilla prepared photo evidence of each violation collected via Google Streetview, which shows the projects being built over the past ten years. City records provided by the Barlington Group show no permits have been pulled for Carollo's house on Morris Lane since he purchased it in 2001, although there is history of permits for the home from 1982 to 1998, before Carollo moved in.

The federal lawsuit against Carollo is still pending. Fuller and Pinilla accuse Carollo of First Amendment retaliation after his extensive "witch hunts" aimed at the real-estate company, wherein he repeatedly sent inspectors to properties at all times of day over the past 18 months. Carollo's attorneys have asked a judge to dismiss the case.

The allegations of code noncompliance are only the latest accusations that Carollo — who earned the nickname "Loco Joe" during his two stints as Miami's mayor — regularly acts as if he were above the law. In the past, he's filed late campaign reports, been investigated for misspending taxpayer money, and fired a staffer who apparently reported him for wrongdoing. Earlier this year, Miami's Community Newspapers dubbed Carollo "the eczema of Miami politics."

This post has been updated to reflect that Fuller, not Pinilla or the Barlington Group, owns Ball & Chain.