It has been 32 years since Oliver Stone’s Platoon hit movie theaters, riding a wave of critical acclaim to four Oscars, including best picture and best director. The movie about the slow destruction of a group of U.S. soldiers in Vietnam remains an unforgettable moviemaking experience for the actors involved, including Charlie Sheen, Johnny Depp, Willem Dafoe, and Tom Berenger. Their sentiments are on full display in the new documentary by fellow Platoon actor Paul Sanchez, Brothers in Arms.

Last month, Berenger and his wife drove from their South Carolina home in a motorhome to appear at the South Florida premiere of the documentary at the Key West Film Festival. The movie would go on to win Audience Award at the fest. He joined Sanchez; Mark Ebenhoch, a military adviser on Platoon who also helped make the documentary; and actors James Terry McIlvane (who played Ace), Bob Orwig (Gardner) and Corey Glover (Francis).

There was also a surprise appearance by Edith Thomas (credited in Platoon as Li Thi Van), who performed alongside Berenger in one of the movie's more troubling scenes when she was only about 12 years old. In the scene, Berenger’s character, the sinisterly battle-scarred Sgt. places a gun against the child’s head. Thomas was not an actress. Stone demanded Berenger get real tears from the girl, who has never appeared in a movie since. Though Berenger succeeded, it’s not something he feels proud of, and it still weighs on him to this day. 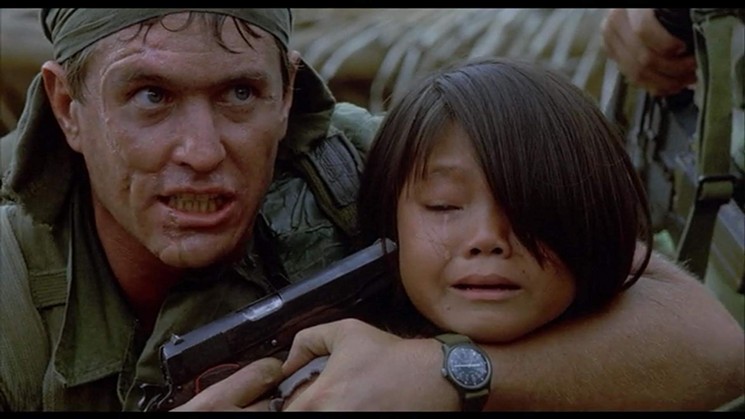 Sitting on the porch of a cafe a few blocks off Duval Street, a couple of days before the surprise reunion, Berenger sips a cappuccino in shorts and a white linen shirt. On the other side of a small table sits Ebenhoch, who was busy texting Sanchez directions to the town Ebenhoch considers his home away from home in Big Pine Key. Wind chimes and the rumble of scooter and truck engines aren’t enough to drown out the memories the 69-year-old Berenger has to share — in particular, that scene with Thomas. He says the scene only took two takes. “When I had to put the pistol to the little girl’s head, that to me was tough,” he admits. Little did he know about the surprise that lay ahead at the film’s premiere screening.

Ebenhoch, however, wanted to exchange numbers with this writer, eager to share news of the surprise once it happened at the film’s Q&A postpremiere. “[Berenger] had to hold back emotional outward signs,” he later reported, “but his wife saw him tearing up from the audience.” The actor had not seen Thomas since the shoot.

Berenger has played some dark characters in his time, starting as far back as the murderous rapist in Looking for Mr. Goodbar (1977). Barnes, he notes, was not a simple villain. “I don’t think Barnes is psychotic, but I think four tours of duty and all that stuff is making him… He’s just a warrior going mad, I think. He’s trying to keep his guys alive and destroy the enemy, and Oliver said, he was a pretty good soldier to be in combat with. He knew what to do. [Stone] says, ‘He’s actually the kind of guy you do want, and I was scared to death of him.'”

Stone made Platoon with a desire to share what it was like in Vietnam based on his personal experience. He served in two different regiments during one long tour where he earned a Bronze Star for gallantry and a Purple Heart. He pushed the actors in a manner that forced them to perform as method actors.


In the documentary, you learn the actors were deprived of sleep and only ate MREs (ready-to-eat field rations) out of a pouch while learning to march and dig holes in the Philippine jungle where the film was shot. They had no hotel rooms for proper rest or even a shower. When this “boot camp” ended three weeks later, they were paraded past Stone and his waiting camera crew to shoot the film’s opening title sequence. “In the first day of shooting, we didn’t need to play tired or sleep deprived,” says Berenger. “We looked it.”

Ebenhoch was there, assisting the film’s lead military adviser, retired States Marine Corps Capt. Dale Dye. Ebenhoch says the experience became key to the actors’ performances throughout the shoot. “We call that muscle memory,” he says. “From then on it was just…” Ebenhoch snaps his fingers. “There was no difference between the bush there and the bush at boot camp.”

In Brothers In Arms, many of the actors admit they didn’t much care for Stone’s approach, though they now recognize its value. In the documentary, Depp says of Stone, “Part of him was still in the jungle.” Depp also shares an incident when the assistant director stopped him from taking out his anger on Stone. The actor planned to urinate from a balcony onto Stone’s head as he ate dinner. The AD yanked him back and asked, “Are you crazy?”

Berenger, however, says he appreciated Stone’s direction from the start. He never complains about it in the documentary. “I loved it. I thought it was cool,” he says. “I thought it was funny in a dark way. Maybe it’s because they were so young,” noting that several of the actors were making their major movie debuts.

Finally, in Brothers in Arms, Dafoe singles out Berenger’s acting. “Tom. He’s the performance of the movie,” he says. “He was able to contact some sort of rage and bitter disappointment that really ran deep.”

Berenger, who had yet to see the documentary, sighed upon hearing that quote from Dafoe. “Nice,” he said with a grin. Asked whether there’s truth in that observation, the now-veteran actor admits, “Yeah,” and pauses. “You don’t talk about all that stuff, but you use it.”

Brothers in Arms is now available to stream on iTunes and Amazon Prime Video, among other streaming services.