National Army of Colombia
Oficina de Envigado kingpin José Piedrahita Ceballos (second from left) the day of his arrest in 2017.
As far as international crime syndicates go, Colombia's Oficina de Envigado is old-school: The organization was founded in the '80s as the enforcer and debt-collection arm of Pablo Escobar's gigantic Medellín Cartel. Run by Escobar's accomplice Diego "Don Berna" Murillo, La Oficina handled the syndicate's dirtiest business, including contract killing, until splitting from Escobar in the mid-'90s after some violent disagreements. The nonprofit site InsightCrime says La Oficina has since grown into a "mafia federation... involved in everything from money laundering and the international cocaine trade to street-level drug sales and micro-extortion."

But now the walls seem to be closing in around at least some portions of the cartel. In September 2017, Colombian federal police arrested one of its major kingpins — José Bayron Piedrahita Ceballos, a former Cali Cartel drug lord — at one of his farms in Antioquia, Colombia, after American prosecutors charged Piedrahita with offering a bribe of cash and prostitutes to a Homeland Security investigations agent.

Now, U.S. federal authorities have charged Piedrahita's son, 30-year-old José Piedrahita Castillo Jr., with conspiring with at least one Miami woman to ship oxycodone pills into South Florida and send hundreds of thousands of dollars in drug money back to the cartel in Medellín.

According to a June 28 federal indictment, prosecutors say Piedrahita Castillo Jr. and Sandra Milena Ruiz Arango began plotting in April to traffic a large shipment of oxycodone pills on U.S. soil. The indictment says Piedrahita Jr. arranged an April 10 meeting at a hotel in Medellín, where he distributed oxycodone pills to a number of his associates, who then smuggled the drugs into Miami, where they were sold.

Piedrahita Jr. then allegedly set up meetings to ship drug money back to Colombia. On May 10, the feds say, one of the cartel's accomplices drove to an unnamed "restaurant in Doral" to receive the proceeds from multiple drug sales.

Though the arrests and indictments are another round of whack-a-mole in America's eternally failed War on Drugs, the new charges at least paint a clearer picture of how the current opiate trade operates.

In June 2014, the U.S. Office of Foreign Assets Control designated La Oficina a "significant foreign narcotics trafficker" and subjected the organization to economic sanctions. Then, in May 2016, the feds came down on Piedrahita's clan. The feds used the Foreign Narcotics Kingpin Designation Act (known informally as the "Kingpin Act") to freeze the U.S. assets of Piedrahita Ceballos, Piedrahita Castillo Jr., and other Piedrahita family members and associates. Piedrahita Castillo Jr. and Ruiz Arango are also charged with Kingpin Act violations.

In an associated document release, the U.S. Office of the Treasury noted that the list of companies linked to the clan included a refrigerator vendor and a pet-supply store called Goody Pets. 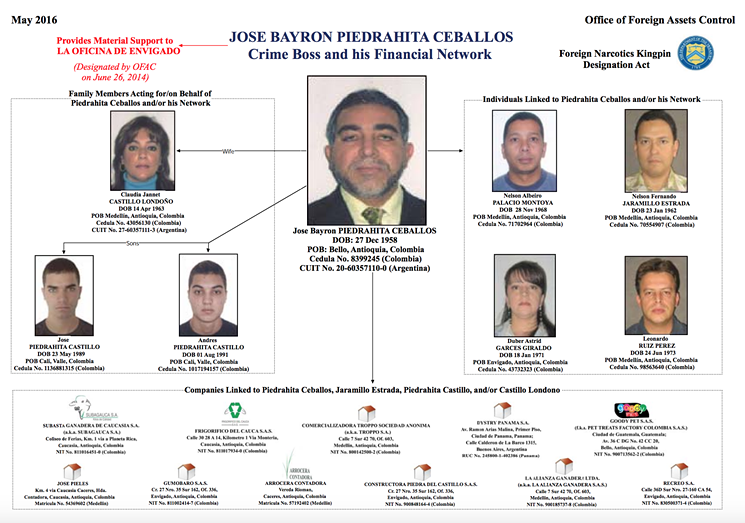 U.S. Office of the Treasury
Piedrahita Ceballos Sr. is infamous throughout Colombia. According to InsightCrime, the now-59-year-old kingpin got his start guarding cocaine laboratories for the infamous Cali Cartel in the early '90s. By 1996, the federal government labeled Piedrahita a major Cali Cartel boss and began tracking his activities and eventually charged him with crimes — that is, until the crime lord bribed an Immigration and Customs Enforcement investigations agent and fraudulently got the charges dropped.

Federal prosecutors said Piedrahita sent about $18,000 in cash to an ICE agent named Christopher V. Ciccione II while also buying him fancy meals and hiring him prostitutes at the Marriott in Bogotá. In exchange, U.S. attorneys in Miami said, Ciccione lied to federal prosecutors and even altered official records in order to get Piedrahita's charges dropped in 2011.

In February 2018, Ciccione pleaded guilty to accepting bribes and was sentenced to three years in prison.