Miami Could Not Handle Three Hours of the Smashing Pumpkins 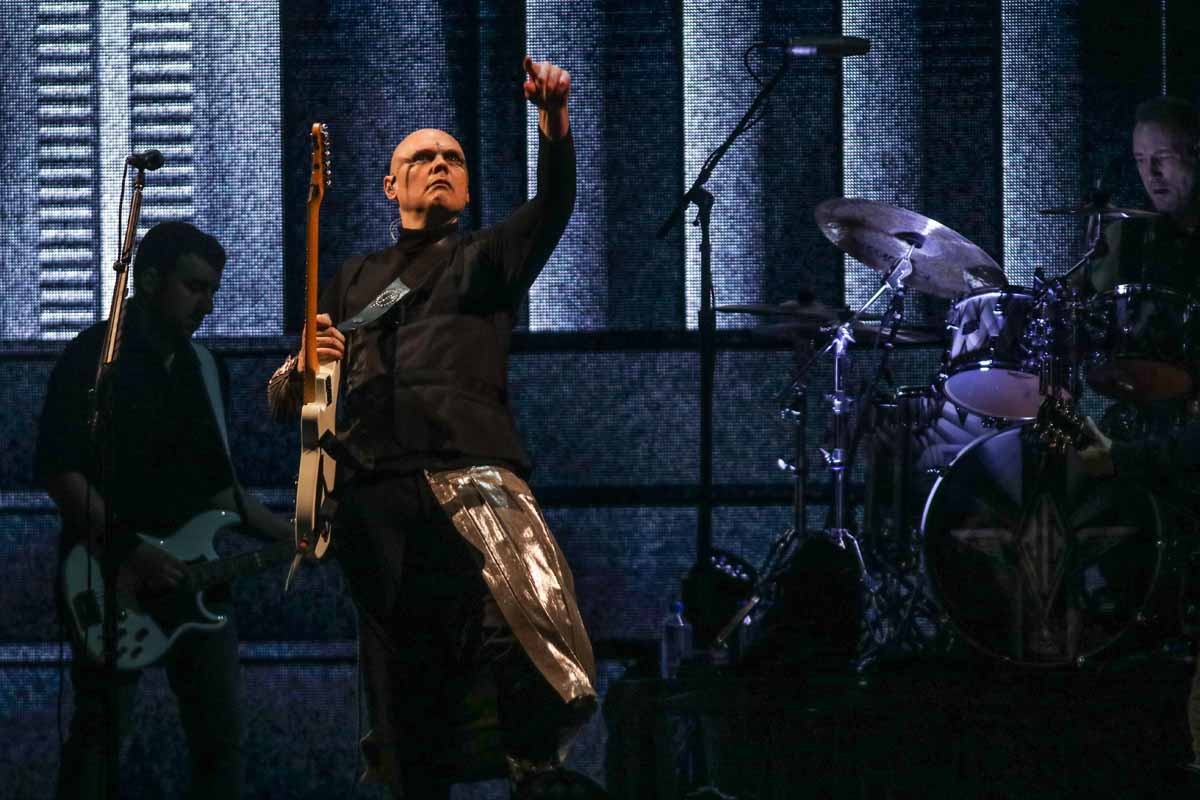 Photo by Sean McCloskey / SFLMusic.com
See more photos from the Smashing Pumpkins' performance at the American Airlines Arena here.
It seemed outrageous in 1994 when lead singer Billy Corgan said the Smashing Pumpkins were influenced by '70s  dinosaur rock like Boston and Electric Light Orchestra. His most faithful fans figured he was being ironic. Those were the kind of older acts his alternative-rock peers like Nirvana and Radiohead openly mocked, aiming to differentiate themselves from their father's rock music. But now it's 2018, and it's no joke. The Smashing Pumpkins have fully embraced that they are as much a classic-rock band as Styx, Journey, or Rush, and they have the current reunion arena tour to prove it.

The curtain at American Airlines Arena opened at 8:15 to a massive screen projecting stars of the night sky. Images from the Smashing Pumpkins' iconography began scrolling into view, including the ice-cream van from their "Today" music video and the cover girl on their album Mellon Collie and the Infinite Sadness. After the short movie, Corgan walked out with his acoustic guitar for a solo rendition of "Disarm." As he strummed his guitar, the giant screen behind him displayed childhood photos and old home movies. It seemed a little odd, but if you weren't comfortable with staring at Corgan's face on a giant screen, this was not the show for you. There were tarot card drawings of him, clips of him from the band's old MTV videos, and more recently made videos featuring his distinctive bald noggin.

See more photos from the Smashing Pumpkins' performance at the American Airlines Arena here.
Photo by Sean McCloskey / SFLMusic.com
But while the night seemed at times like the Billy Corgan show, the reason the band was back to playing in an NBA arena instead of a smaller room was that, for the first time in decades, the Smashing Pumpkins included most of their original lineup, with guitarist James Iha and drummer Jimmy Chamberlain. Iha and Chamberlain came out for the second song, "Rocket," along with a bassist, a third guitarist, and a keyboardist. They replicated their early songs convincingly, but the crowd didn't seem to be into it — the loud murmur of chitchat was evident during quieter parts of masterpieces such as "Rhinoceros" and "Drown."

The format for this concert felt like a poor fit for Miami. It was a three-hour deep dive into the first decade of the band's career, structured for hard-core fans. But just about any band playing a cavernous arena will draw a lot of casual listeners. And this night's attendees wanted to hear "1979" and would evidently let their boredom be known when serenaded by songs they didn't know. They talked loudly during the quieter ballads and stampeded to the bathrooms and concessions when Iha took the reins to sing his lone song.

See more photos from the Smashing Pumpkins' performance at the American Airlines Arena here.
Photo by Sean McCloskey / SFLMusic.com
The band sounded great, but if the Pumpkins had played a more intimate venue, the show might've been unforgettable. Fortunately, they had enough hits to bring people out of their seats from time to time and even played other act's classic-rock hits, such as David Bowie's "Space Oddity," Led Zeppelin's "Stairway to Heaven," and, of course, Fleetwood Mac's "Landslide."

How much Smashing Pumpkins is too much was a question the band flirted with answering throughout the 30-song, three-hour set, but that made sense: Classic rock, after all, has always been about excess.