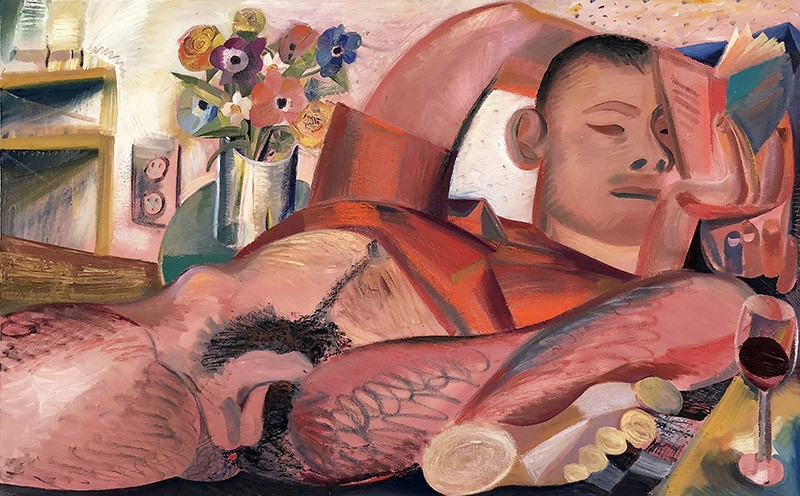 Courtesy of Thierry Goldberg Gallery
Louis Fratino's Reading in the Evening (2018).
painting has received a fair amount of attention in the past several years. From retrospectives of artists such as John Currin and David Hockney at museums, to exhibitions of contemporary work at major galleries, the often-overlooked field is experiencing a resurgence. Locally, "Touching Palms" at Thierry Goldberg Gallery is exhibiting new work in a group show of figurative painting. Featuring multiple individual pieces by Louis Fratino, Benjamin Degen, Odinel Pierre Junior, and Hope Gangloff, the new show gives locals a chance to view, and perhaps purchase, work in a burgeoning genre.

One of the more interesting artists in the show, Gangloff pushes the boundaries between abstraction and figuration — colorful and abstract backgrounds behind banal subjects. After careful study of the shy and disinterested figures she renders, the viewer quickly realizes that they were drawn waiting at an airport, caught at a glimpse.

Hope Gangloff's Search at Suvarnabhumi Airport (2016).
Courtesy of Thierry Goldberg Gallery
Providing contrast to the coldness in the figures in Gangloff's canvasses, Fratino show moments of sensual vulnerability in his pieces. His abstract figures are not meant to capture reality in the objective sense, but rather provide a glimpse into the artist's inner world. Through his hazy, dreamlike lens, the renderings seem to be awash in languor. Like Gangloff, Fratino skirts the line between the real and abstract, striking a delicate balance in each painting. Though starkly different in tone and composition, both artists' work a well-studied perspective on the history and forward trajectory of figuration.

The work of self-taught artist Odinel Pierre Junior, however, provides a refreshing take on pop culture and historical figures. Drawn from the Zeitgeist, these subjects aren't imbued with the intimacy that pervades the work of Gangloff and Fratino, but they are something totally different. Painting modern icons such as Michael Jackson, Pierre means to elevate his subjects while rendering them with an amateurish flair. It creates a tug-of-war between subject matter and form that draws the viewer in while pushing his chosen subjects even closer.