A Miccosukee Activist Brilliantly Trolled Bros in Headdresses at Ultra

Courtesy of Houston Cypress
When Houston Cypress headed to Ultra Music Fest last weekend, his only plan was to dance the day away. But then the Miccosukee Tribe member saw the dozens of partiers writhing around in Native American headdresses at Bayfront Park.

Cypress, a well-known environmental and gay-rights activist, felt the faux Native American attire was disrespectful. Headdresses are powerful symbols to real tribal members, he says, so he was upset to see them used as props at an EDM fest.

"Headdresses are earned status symbols in our community. It takes training and accomplishments and real sacrifices to earn the right to wear them, so it felt like they were stepping on our sovereignty," Cypress says. "By wearing them, they were not only erasing our history, but also who we are today."

Cypress, who wore traditional Miccosukee clothing to the festival, quickly came up with an ingenious plan: He asked the partiers in fake headdresses to pose alongside him, an actual Native American in traditional clothing. The Ultra-goers were happy to take the pics, Cypress says.

Courtesy of Houston Cypress
The resulting photos are a jarring case study in cultural appropriation. Cypress says that as he posed for the photos, he thought back to his own tribe's history as an object of curiosity for white tourists.

"My community used to be on display in tourist villages along the Miami River," he says. "That was a disheartening time because they felt like they were like sideshow freaks. So that was the idea I used — let's turn the camera on these people who want to be Indians." 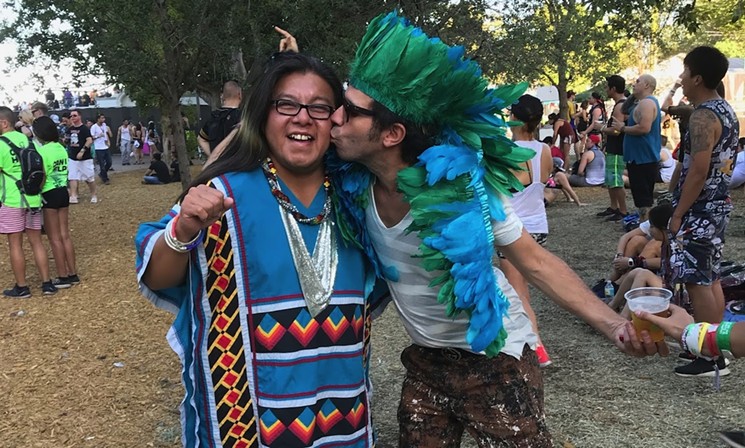 Courtesy of Houston Cypress
There's been a years-long pushback from some Native American activists against headdresses and other faux-Indian costumes at music festivals. Cypress says he knew some partiers still wore them at Coachella and other big fests, and he had read that A Tribe Called Red, a First Nations hip-hop group, had gone so far as to ban the costumes at their shows.

But Cypress says that before this weekend, he had no clue Ultra-goers still donned headdresses.

"It homogenizes our diversity," he says of the Indian costumes. "We're such a diverse people and it makes us into one cheap stereotype." 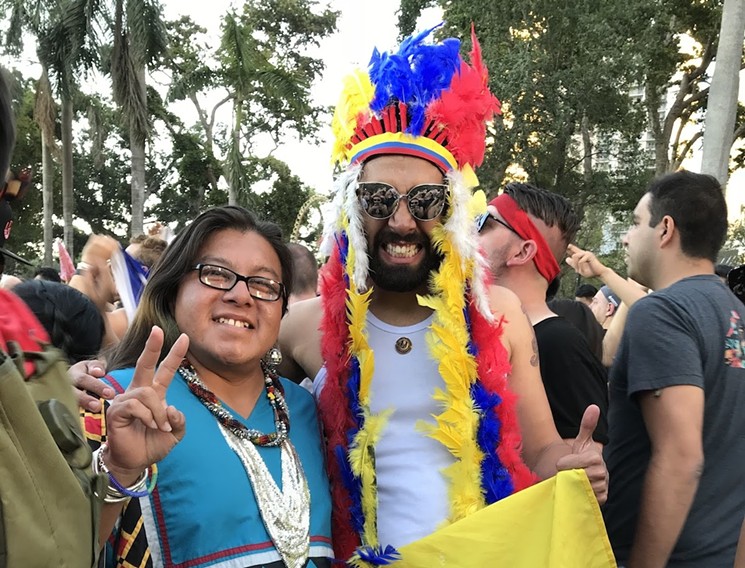 Courtesy of Houston Cypress
Cypress says he tried to talk to some of the Ultra-goers wearing headdresses, but the concert was too loud for real discourse. He hopes his photos spark conversation about what the costumes mean and whether they're appropriate at shows like Ultra.

"I wish that it wasn't still happening, but it's also a good opportunity to talk about of issues that we rarely discuss," he says. 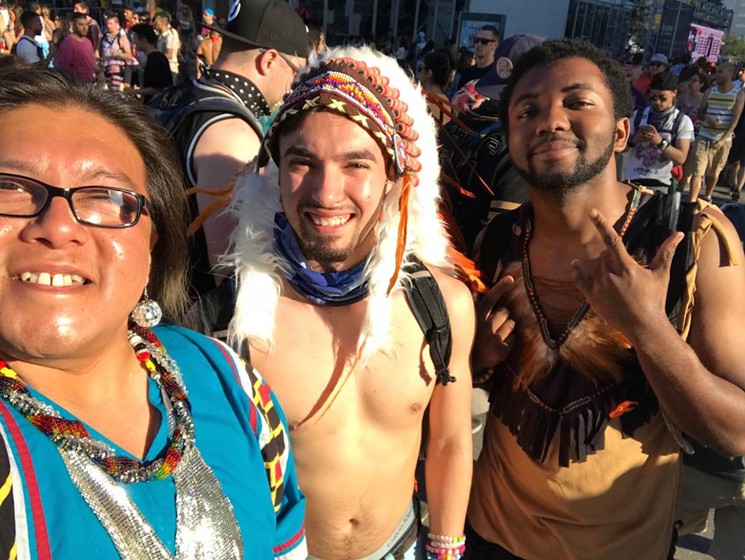 Courtesy of Houston Cypress
Despite his side project documenting the headdresses, Cypress says he still enjoyed his visit to Miami's longest-running dance party.

"I totally lost myself in the groove," he says. "I had a great time."