The Ten Best Croquetas in Miami

The competition for Miami’s favorite fried food is nothing short of fierce. Seemingly endless variations and regional styles of the quintessential croqueta are sold from street carts, high-end restaurants, and beyond. They’re inescapable. Yet who would want to escape them?

Whether served for breakfast, lunch, dinner, or snack time, croquetas have long been an iconic fixture at meals. Forget having just one. After biting into the crisp golden-brown cylinder, stuffed with the perfect balance of protein and béchamel, you can't help but reach for another.

The 305 offers many celebrated croquetas in various flavors, shapes, sizes, textures, and methods of preparation, and all are worthy of recognition. But let's direct you to the very best. Hint: They're not all from Vicky Bakery. 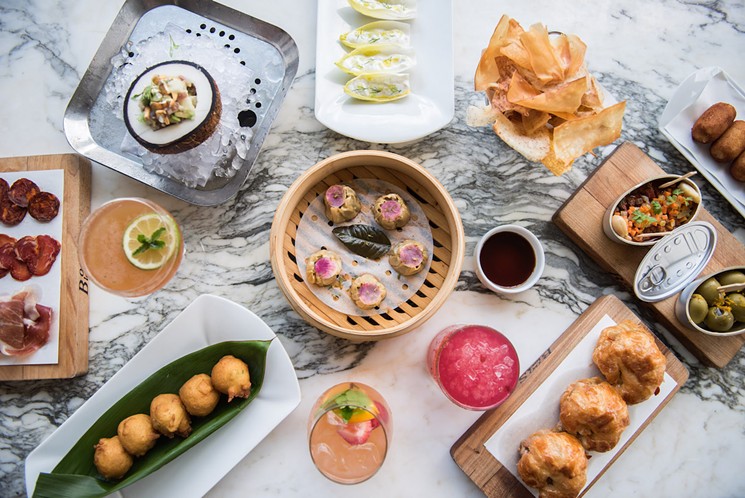 The Bazaar by José Andrés

1701 Collins Ave., Miami Beach
305-455-2999
thebazaar.com
José Andrés is a humanitarian, a Nobel Prize nominee, and an author, but he's also one of the best chefs and restaurateurs alive today. Known for his whimsical and precise takes on classic dishes, Andrés offers two croquetas on the menu at his South Beach restaurant. The croqueta de pollo ($12) is creamy and addictive, but it's the croqueta de jamón ($13) that takes the prize. The chef uses Ibérico ham in his croquetas, which are fried to a golden hue. 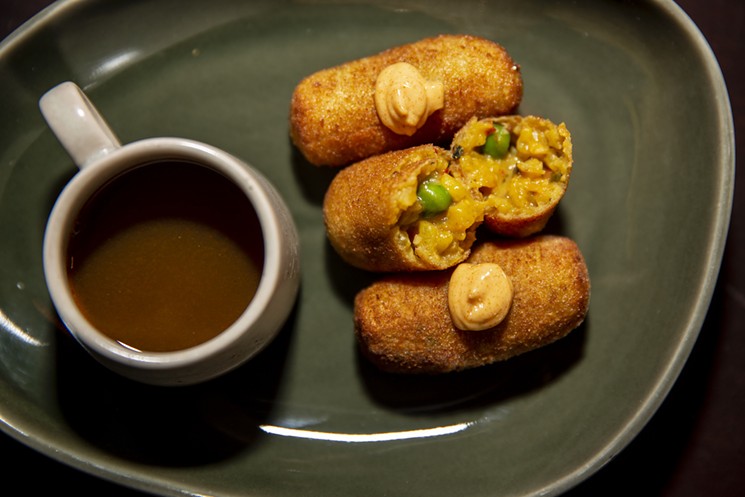 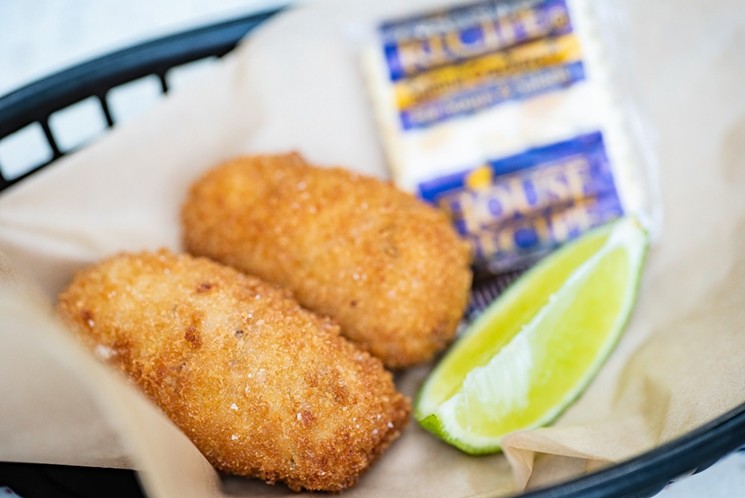 3444 Main Hwy., Miami
786-534-8722
chugsdiner.com
Chef Michael Beltran's Coconut Grove Cuban diner serves all manner of comfort food, but it's the croquetas ($1.99) that are the star of the show.  Beltran doesn't reinvent the wheel with his classic ham croqueta — he just uses the best ingredients and makes every golden croqueta from scratch. Each one is made with freshly ground ham seasoned with the chef's personal blend of sazon completa made in-house. The croquetas are hand-rolled and breaded, and each batch takes four days to complete. That's a lot of work for the perfect bite. 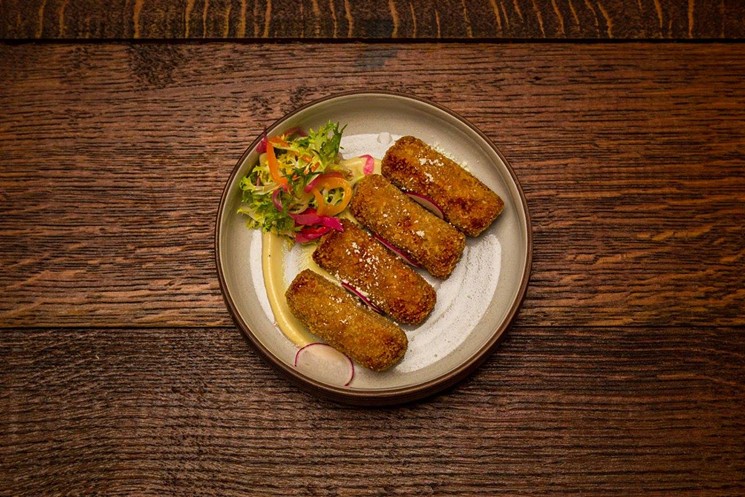 10505 Bird Rd., Miami
305-912-3672
doscroquetas.com
The beauty of Dos Croquetas is you don’t have to put much effort into procuring them. Let Miami’s first croqueta delivery company bring its handcrafted creations directly to your doorstep. The hard part comes in deciding which unconventional flavor you want: the 305, filled with Angus-style Cuban picadillo, plantains, and cheese; Mexican street corn; mac 'n' cheese and bacon; Buffalo crack chicken; Angus cheddar burger; or ham. If you can’t choose just one, Dame Mas ($13.49) lets you sample six flavors of the classic snack. 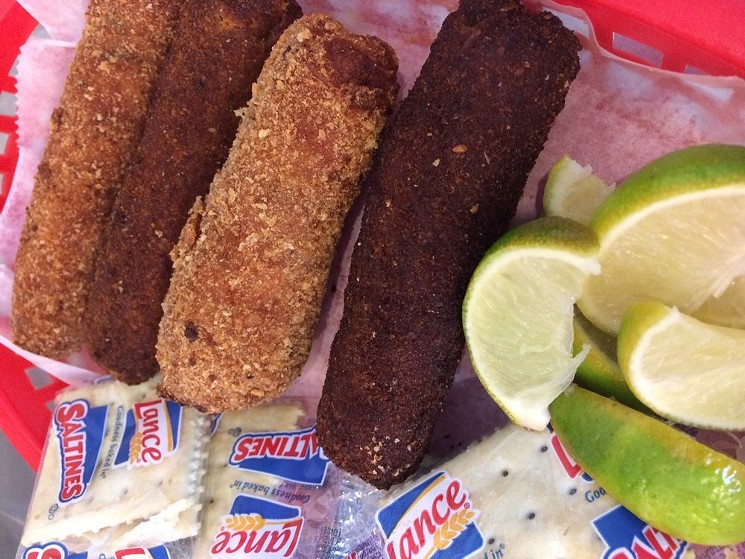 186 NE 29th St., Miami
305-573-4681
The working crowds of Wynwood and midtown pile into this cafeteria for warm cups of café con leche and Miami’s best Cuban-style sandwiches. The famed cubano preparado con croquetas ($7) is one of them, which stuffs ham croquetas into a Cuban sandwich, made with ham, roast pork, melted Swiss cheese, pickles, and mustard. However, Enriqueta’s deep-fried-to-order cylinders of goodness (80 cents each) can stand on their own. Insider tip: Ask for the croquetas made in-house. 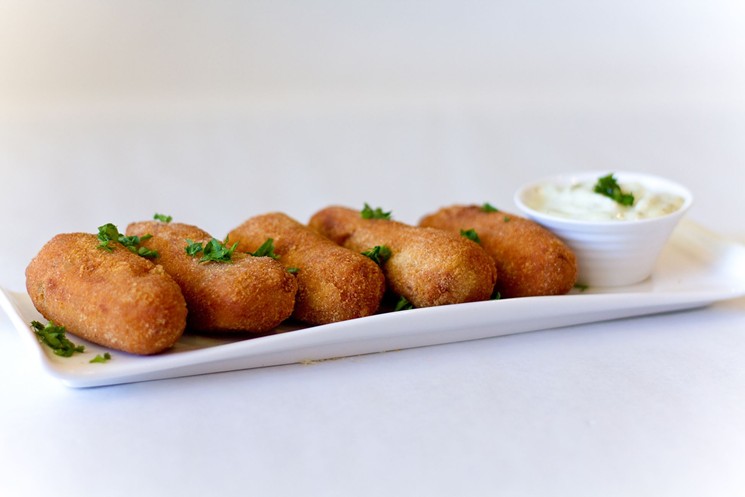 13695 SW 26th St., Miami
305-559-6666
islascanariasrestaurant.com
No croqueta joint is more worth standing in line for than the place that started it all in the '70s. Islas Canarias, which brought the croqueta revolution to Miami, is the expert at croqueta creation. The pinnacle is the classic ham croqueta ($1.06), a creamy mix of béchamel and smoky specks of pink ham covered in golden bread crumbs. Other croqueta options are chicken, fish, and beef. 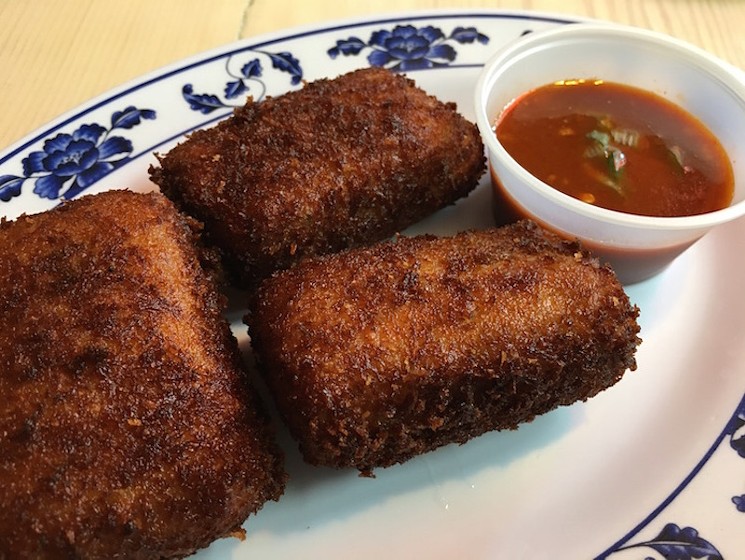 3401 N. Miami Ave., Miami
305-576-8096
sakayakitchen.com
Traditionalists, beware. With every dish at Sakaya Kitchen, innovation is key. Enter specialties such as the spicy cheesy kalbi beef tater tots, a hot dog with kimchee, and the housemade dae ji spicy pork croquetas ($6). The Latin meal get an Asian twist, complete with a ginger-soy dipping sauce for optimal flavor.

Various Locations
sergios.com
Since 1975, Sergio’s has developed a following of croqueta fanatics across Miami-Dade and even Broward, with locations in Hialeah, Coral Gables, Doral, Kendall, Westchester, and Pembroke Pines. Its specialty is the ham croqueta (99 cents), deep-fried in extra-virgin olive oil. The result is a beautifully coated brown roll with the richest, creamiest, most flavorful filling.