The Cons — Simultaneous Camming, Cannabis, and Tattoo Expos — Are Coming to South Beach

Photo by George Martinez
This year's CamCon promises to be bigger than ever.
For the past five years, the SLS South Beach has been home to one of the most titillating networking events in the nation: CamCon. For a few days a year, many of the most beautiful and brazen faces (and bodies) of internet stardom come together to have fun in the sun, make new professional connections, and show their fans some love.

However, this year, the digital models will have some extra company. On May 29, CamCon will be joined by Inked Con, a tattoo convention; and Cannabis Con, celebrating all things weed, under a new united banner: the Cons. A South Beach hotel hosting sexy, scantily clad men and women, tattoo brands and thoroughly tattooed models, and an array of the nation's biggest names in the marijuana industry — is there anything more Miami?

"It just made sense to us to put all these like-minded, alternative-lifestyle things in one place for a couple of days," says Clinton Cox, cofounder of CamCon and one of the minds responsible for this three-pronged hybrid show. And though the three-day event as a whole will follow the founders' proven convention formula, the addition of two new alternative-lifestyle markets has already proven to be a big draw in the initial weeks of signups.

"In the first week, we’ve had over 93 models register for the CamCon show, probably the most models we’ve ever had sign up this fast," Cox says. "We’re excited — we’re getting a lot of positive feedback on our social media. We just think putting the three shows together is going to make for a very interesting program."

Camming is a billion-dollar industry that allows models to make thousands of dollars a week from home. According to one study, about 30 percent of Americans have tattoos, a percentage that grows if you consider only millennials. And in 2016, marijuana grew to be a $6.7 billion business in the United States according to Forbes, which cited a report that projected cannabis would become a $20 billion industry by 2021. 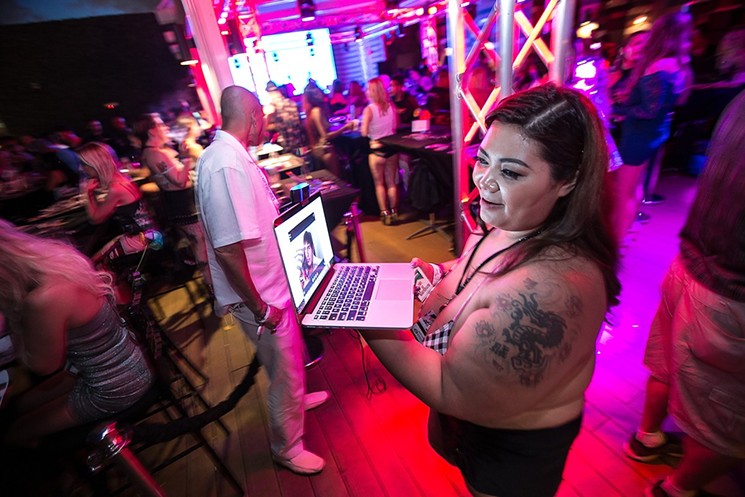 Camming, along with tattoos and marijuana, is a huge industry.
Photo by George Martinez
They are big businesses. And for the first time, they'll all be in one place. It's a one-of-a-kind affair, not only in terms of the interests and lifestyles being represented but also in terms of the atmosphere in which they'll be represented. "Instead of a convention-room environment, every cabana at each pool is a brand," Cox explains. "We actually fly in probably double the amount of cabanas they have."

But it's more than the cabanas that set this event apart from most other conventions. Don't expect to see everyone walking around wearing lanyards with a suit and tie. A great deal of the success of CamCon (and of camming in general, for that matter) is rooted in a very simple truth: Sex sells.

"Because we have the SLS and because it’s 18-and-over, we can pretty much do what we want," Cox says. "We have a big topless event during industry day, and that’s a full-day deal. The brands hand out swag; they talk to hundreds of people that come by their booths. It’s just a really neat networking event. And, of course, because it’s Miami, it’s a day party, so we have live DJs and it’s a lot of fun."

In addition to the topless industry day, the champagne toasts to the models, and the after-hours networking at Basement Miami, the extravaganza also includes a full day of seminars tailored to participants. For example, the digital models will get advice about everything from building their brand to dealing with online bullies to filing their taxes, while people in the cannabis space will have a chance to learn about Florida state law, what the future holds for the industry, and what's going on in other markets. "It's very nutritious," Cox says.

To top everything off, the show will travel from South Beach to the mainland, where models will set up autograph tables for a fan-focused event at Club Space. And cannabis companies will sell everything from papers to pipes to branded attire.

After that, the party to close out the Cons will happen at downtown's 24-hour cabaret, E11even. After you've done a half-naked industry day by the pool, a networking night at an underground bowling alley, and an autograph session at Space, what other Miami venue could put on a proper finale?