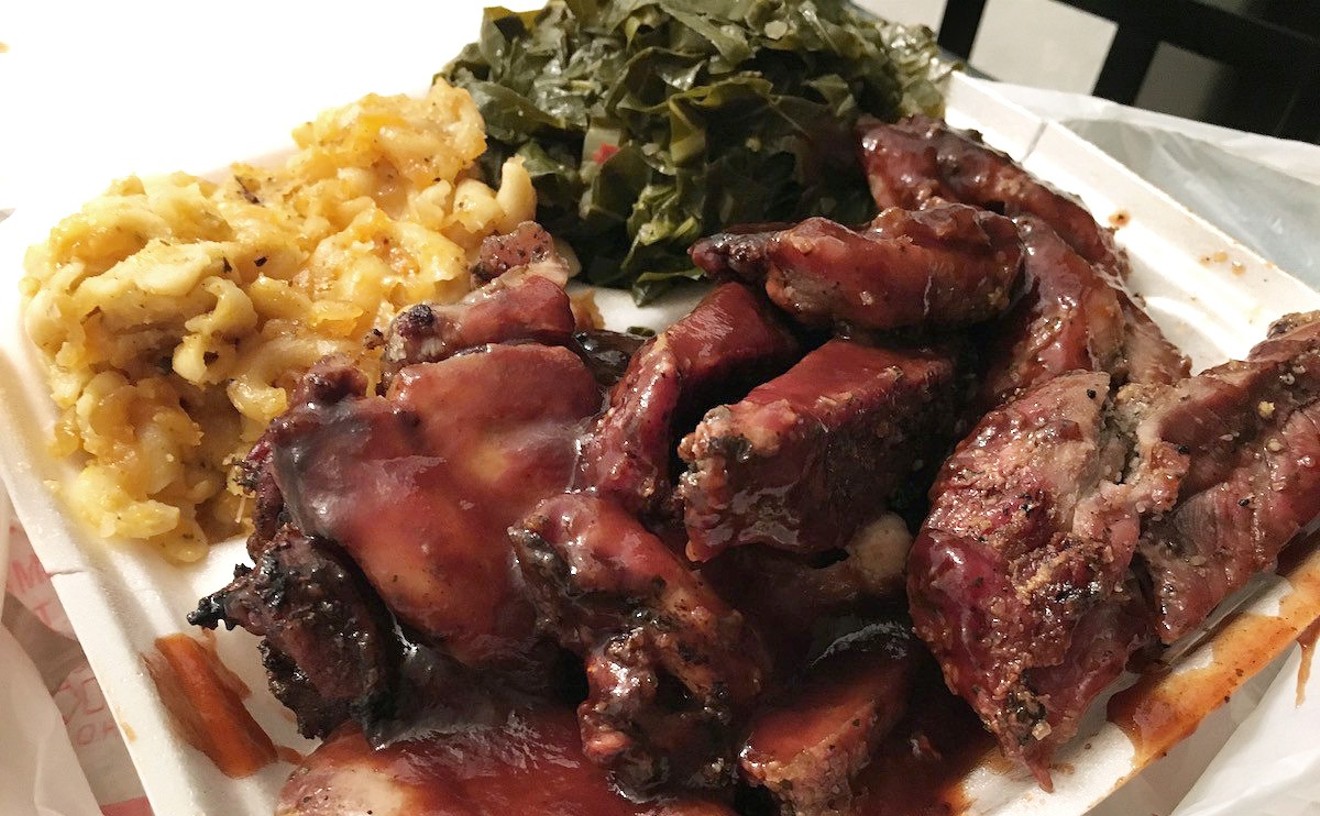 They come from Pembroke Pines, Miramar, and Boynton Beach — all for Terry Watts' cooking. When he first lit a grill more than two decades ago, he never thought he'd be "world-famous" as so many of his regulars now proclaim. He did, however, know he'd be called Mr. Boneless. As a lifelong Liberty City resident, Watts was no stranger to barbecue. It was a weekend staple. He eventually became one of the countless vendors plying grilled fatty meat on neighborhood street corners. But his was different. Watts had the good sense to liberate racks of ribs ($12) and chicken ($10) from their bones, making it easier to wolf down the succulent meat painted with his sweet, tangy barbecue sauce. It soon became a hot commodity, and legions tracked him down each weekend, hungry for a taste of Mr. Boneless. His phone was inundated with text messages. "Where you at?" was their battle cry. He silenced them all nearly a decade ago, when he opened an eatery inside a burnt-orange building guarded by a charcoal grill where all the meat is cooked. The hours vary, but the surest way to know Mr. Boneless is open is the smoking grill and the line stretching out the door. 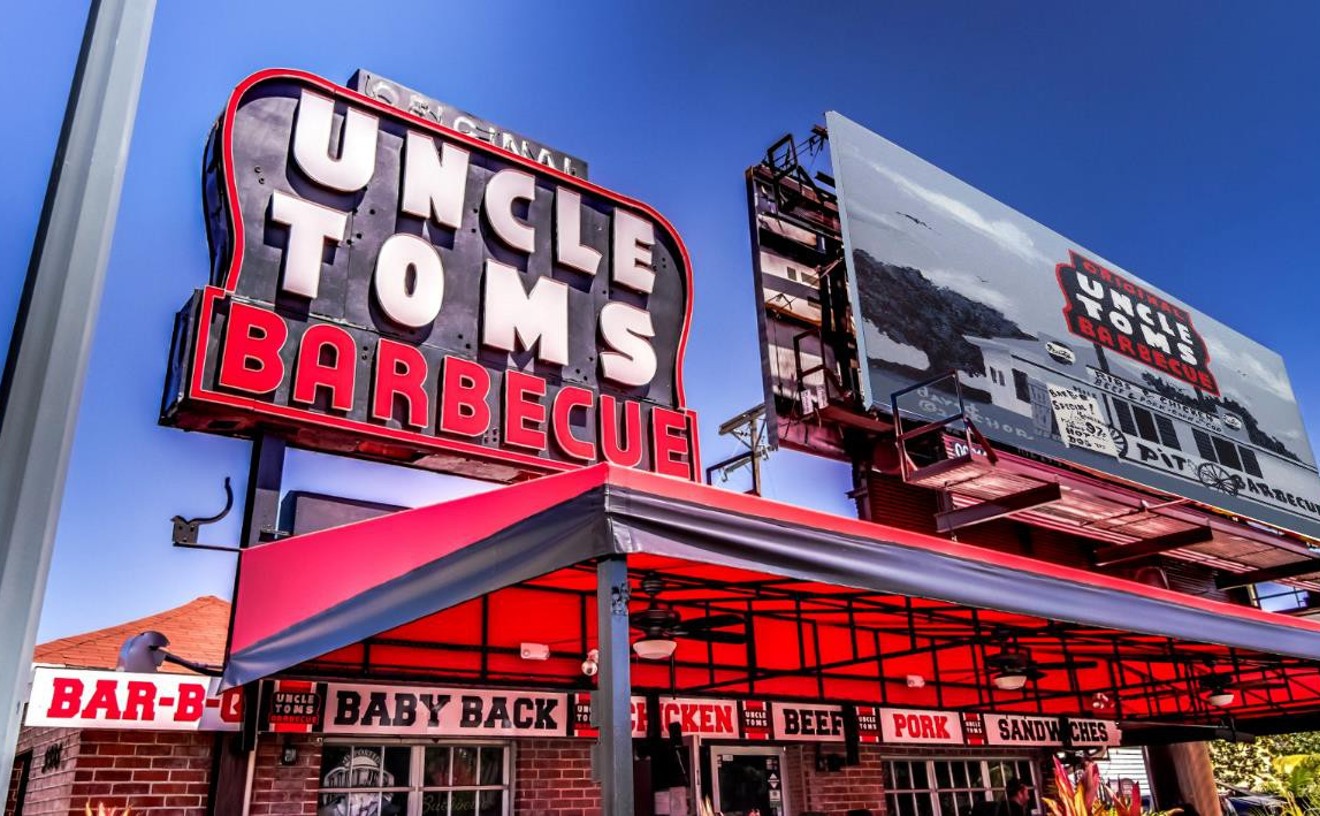 You'd expect to find genuine barbecue-pit baby-back ribs and juicy, tender brisket at Uncle Tom's BBQ, but there's one item on the menu that tends to get overlooked, and it's what you need to be eating right now: Uncle Tom's stuffed mac 'n' cheese. Not really stuffed per se, this plate of gooey goodness is served as a casserole-like platter, drizzled in a sweet-and-tangy barbecue sauce with your choice of meat (pulled pork, pulled chicken, or bacon for $10.95 or rib meat or brisket for $12.95) and just the right amount of cheese. If you prefer your mac 'n' cheese plain and on the side ($4.95), though, Uncle Tom's offers that too. But no matter which plate you choose, your taste buds will bask in the pure cheesy glory. 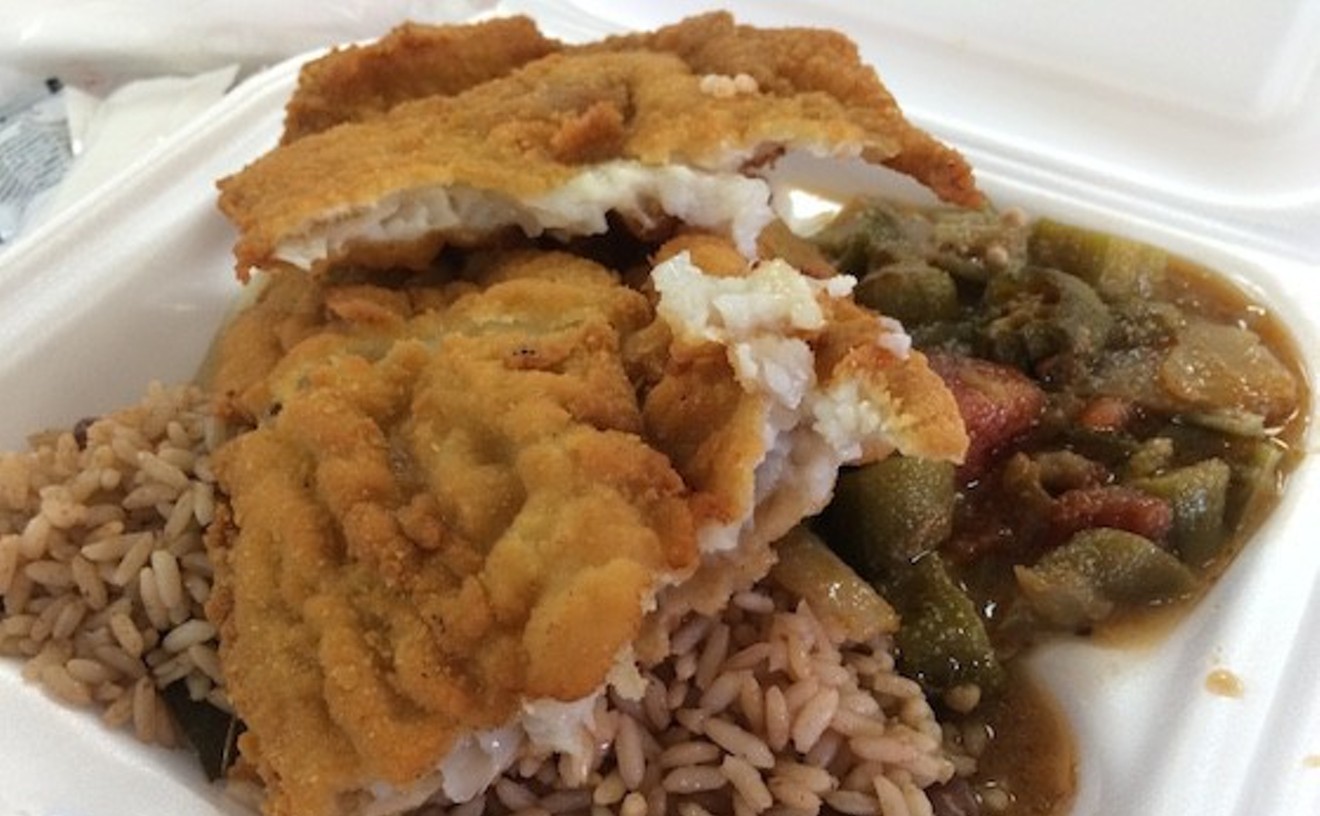 Esther and Clemente Palmarola opened a restaurant on NW Seventh Avenue in 1961 as a catering kitchen turning out boxed lunches for newly arrived Cuban immigrants. A decade later, they sold it to Pablo Suarez Sr., who kept the place mostly the same until the 1980 riots. Then more African-Americans began moving into the working-class neighborhood, which was previously dominated by Cubans. Many wandered into Esther's each day, wondering what smelled so good. Hence, the take-away business was born. Soon it became Miami's go-to spot for heaping, hearty portions of soul food. These days, Suarez's sons, Tony and Pablo Jr., oversee two restaurants — another was added in 2001 a couple of miles from Dolphin Stadium — where you can get fried fish and congri ($5.99) or the Cuban oxtail stew called rabo encendido ($14.97) with a heap of macaroni 'n' cheese. In the morning, there are scrambled eggs, buttery grits, a biscuit, and a choice of bacon, sausage links or patties, or ham ($4.29). For lunch, the sprawling steam tables are cleaned and reloaded with juicy palomilla steaks ($7.50) and meatloaf ($6.20) that can be accompanied by everything from black beans to stewed okra and tomatoes. What's not to love?

This Coral Way spot is confusing in the best sort of way. Step inside the sprawling space festooned with menacing bull silhouettes, and you're faced with two menus. On one, choose from a lineup of Indian classics like chicken korma ($15) and lamb rogan josh ($17). On the other, find an extensive array of Spanish favorites. But as you decide whether you want your tortilla filled with shrimp ($9) or jamón y queso ($5), don't forget to order the chorizo croquetas ($1 to $1.25). Each fat, crisp cylinder overflows with a creamy filling that can only be described as meat frosting. The savory, salty pork is the first thing to smack your palate. Then comes the salt, followed by intense smoke and spice courtesy of plenty of paprika and garlic. The rich béchamel tempers and ties it all together. This sets you up for the next bite — or maybe more of that rogan josh. 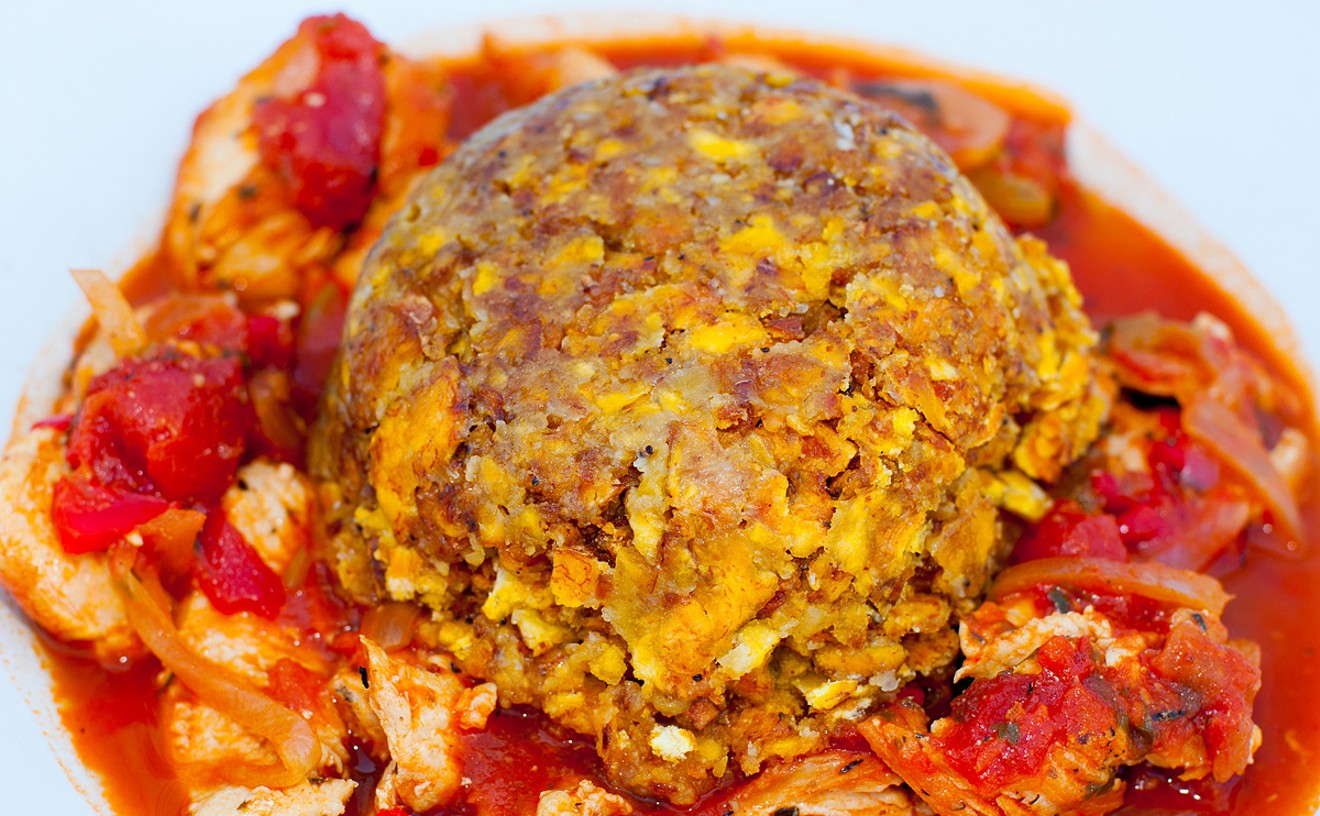 Jimmy Carey's heart is made of mofongo. Sure, the food at his growing list of Jimmy'z Kitchen restaurants spans American, Spanish, French, and Nuevo Latino dishes, but it's the Puerto Rican chow that has his ticker's rhythm. And from the panoply of platos puertorriqueños, it's that savory yellow/green plantain mash that really has the beat. You can find it at the Wynwood, Brickell, and Pinecrest locations throughout the week. There are so many selections. Perhaps you want your chicharrón-studded dome encircled by shrimp ($17.50) in a tangy creole tomato sauce. That same sauce spices and sweetens the starchy mass. But if you choose mojo roast pork ($17), the combination of the sour-orange marinade and the pig's savory juices softens the mofongo into an ultra-savory pile of decadence. Think of it as ice cream — some days, you want sprinkles; others, you want fudge. No matter how you dress it up, it's something you crave everyday.

Tripe is the food of poverty, desperation, and white-knuckled survival. But like so many unappealing cuts, it has been a focus of chefs who aim for the delicious. And at Cliff's, honeycomb tripe and fat butter beans ($5.50 at lunch, $10.43 at dinner) morph into something magical, urged on by enough pungent masala powder and enough ginger, garlic, and scallion to test the will of even the most dedicated curry fiend. The mixture is similar to that used in the curried goat. It could be considered the perfect hangover chaser or the ideal meal to wash away the memory of a rough day. There's nothing like it, and no dish in town comes with more bang for your buck. 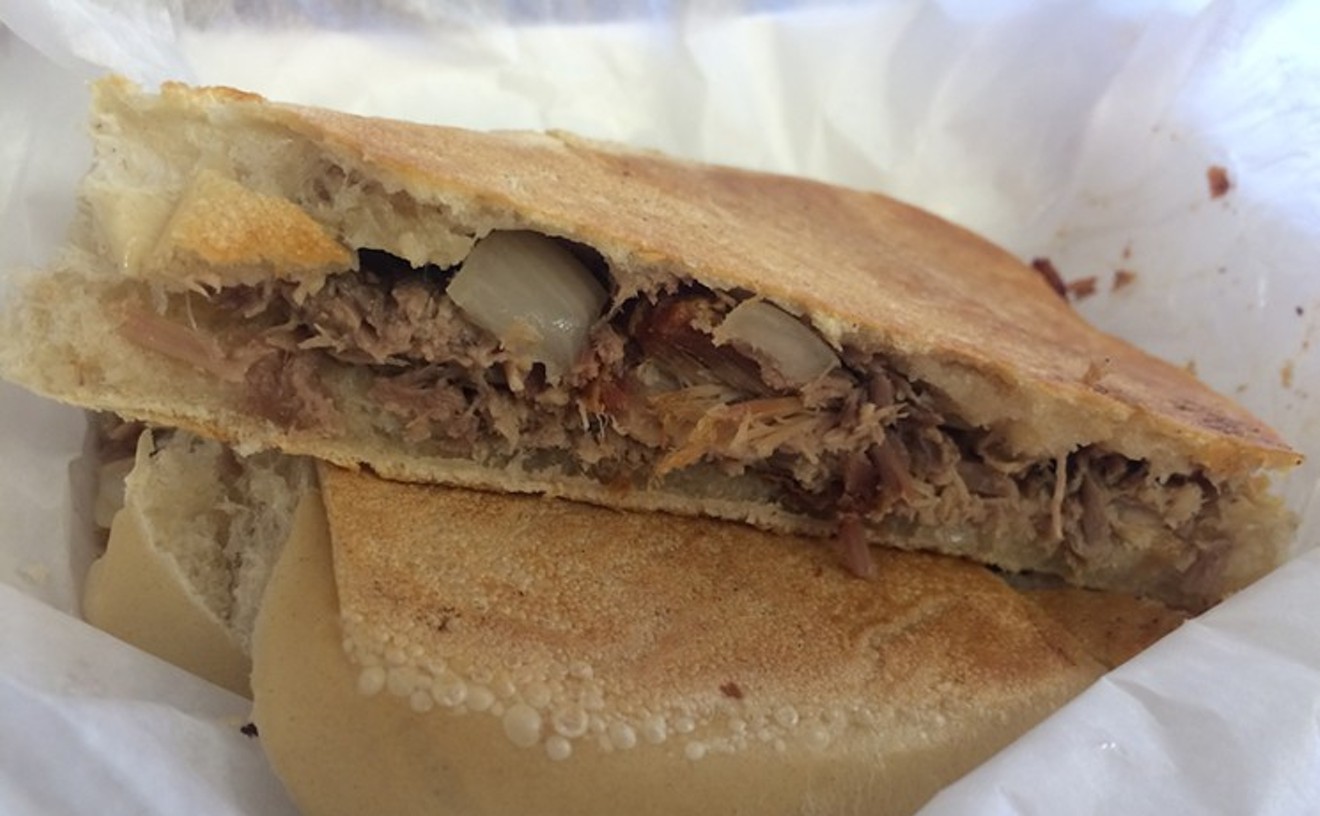 Angel Torres' customers devour about 200 pounds of juicy pork a day, most of it in the Butcher Shop's pan con lechón ($2.99/$5.99). But that's not what makes this dish so addictive. It's the loaves of bread he constantly proofs and bakes in a sweltering kitchen where huge vats of black beans and yuca bubble away. Here's what happens: You place your order, and a mountain of glistening pork is spooned on top of the bread. Next come a few shards of crackly pig skin. Then it's to the griddle. Here's where the magic happens. The crust of Torres' bread is crisped into an impossibly thin wafer that somehow supports all the porcine delights. Each loaf soaks up the sandwich's juice along with as much of the tangy "mojito" sauce as you can squeeze out of the bottle. The magic continues after you've finished, when you find yourself back at the counter, begging for a sandwich to-go.

Firmly pressed Cuban bread, crisp papitas, tender, thinly sliced beef, and a squirt of ketchup: These are the makings of Hialeah's National Supermarket #2's pan con bistec. Many cafeterias attempt this dish, but none crafts it as skillfully as this grocery store's corner café. The gargantuan sandwich overflows with papitas, an appetizer for the blessing soon to come. For most, it's a classic interpretation of the Cuban staple: tomatoes, papitas, and lettuce. But this market's touch of ketchup heightens an already juicy meal. It's like the icing on the cake, but really, it's the ketchup on the pan con bistec. 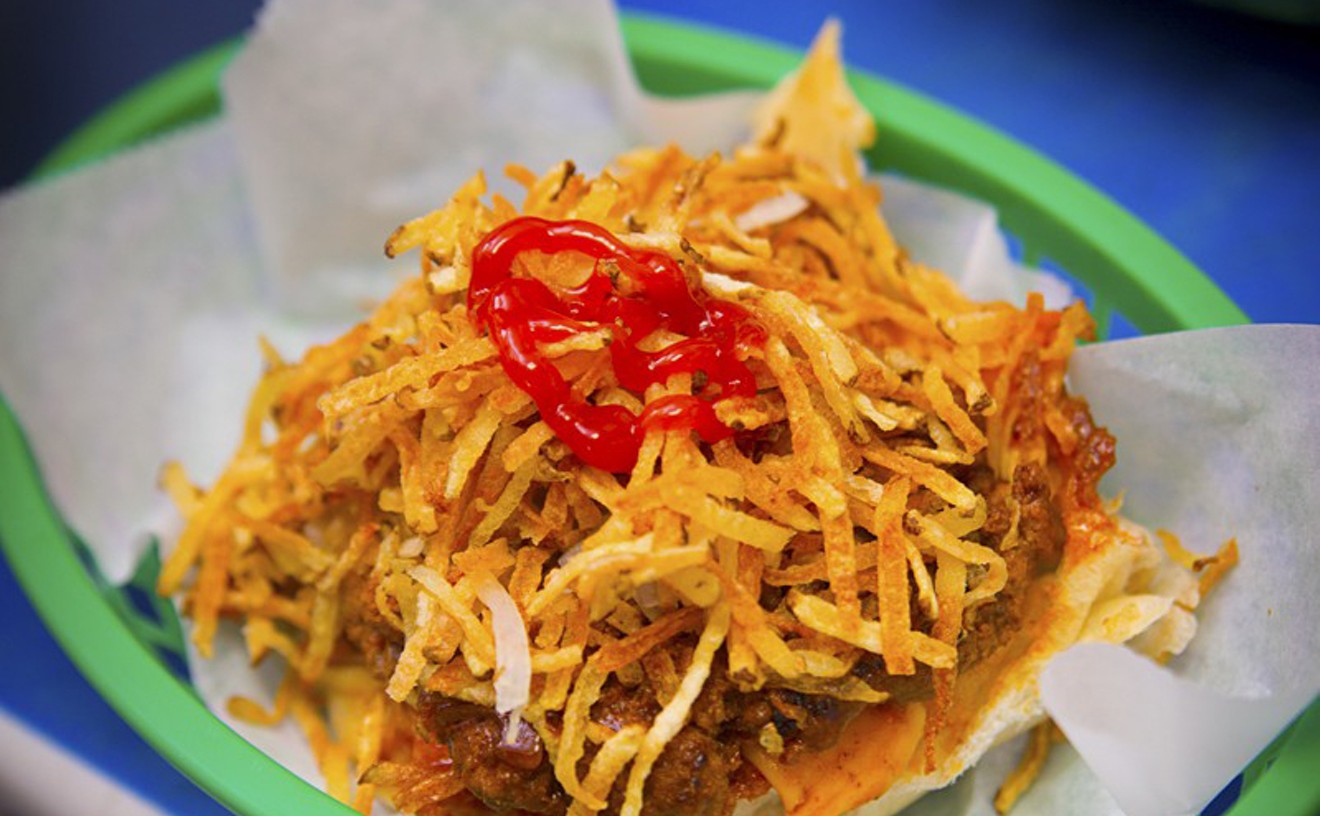 There's a reason Chopped judge and celebrity chef Amanda Freitag told New Times this place is her first stop when she lands in Miami. El Mago de las Fritas is casual and family-owned, with more than three decades of legacy. This spot does classic dishes best, especially the beloved frita, which is how owner Ortelio Cárdenas earned his nickname of "El Mago," or "The Magician." Cárdenas is 77 years old and handcrafts the patties himself. His fritas are perfectly sized, impeccably juicy and flavorful, and lack the grease that taints some Cuban burgers. Though he keeps his seasoning and sauce recipes a secret, Cárdenas is eager to share the renowned finished product, which sells for only $3.50 each. Miami has lots of options when it comes to this local staple, but choose the spot with the magic touch. El Mago de las Fritas is open Monday through Thursday from 10 a.m. to 8 p.m. and Friday and Saturday from 10 a.m. till the last customer leaves. 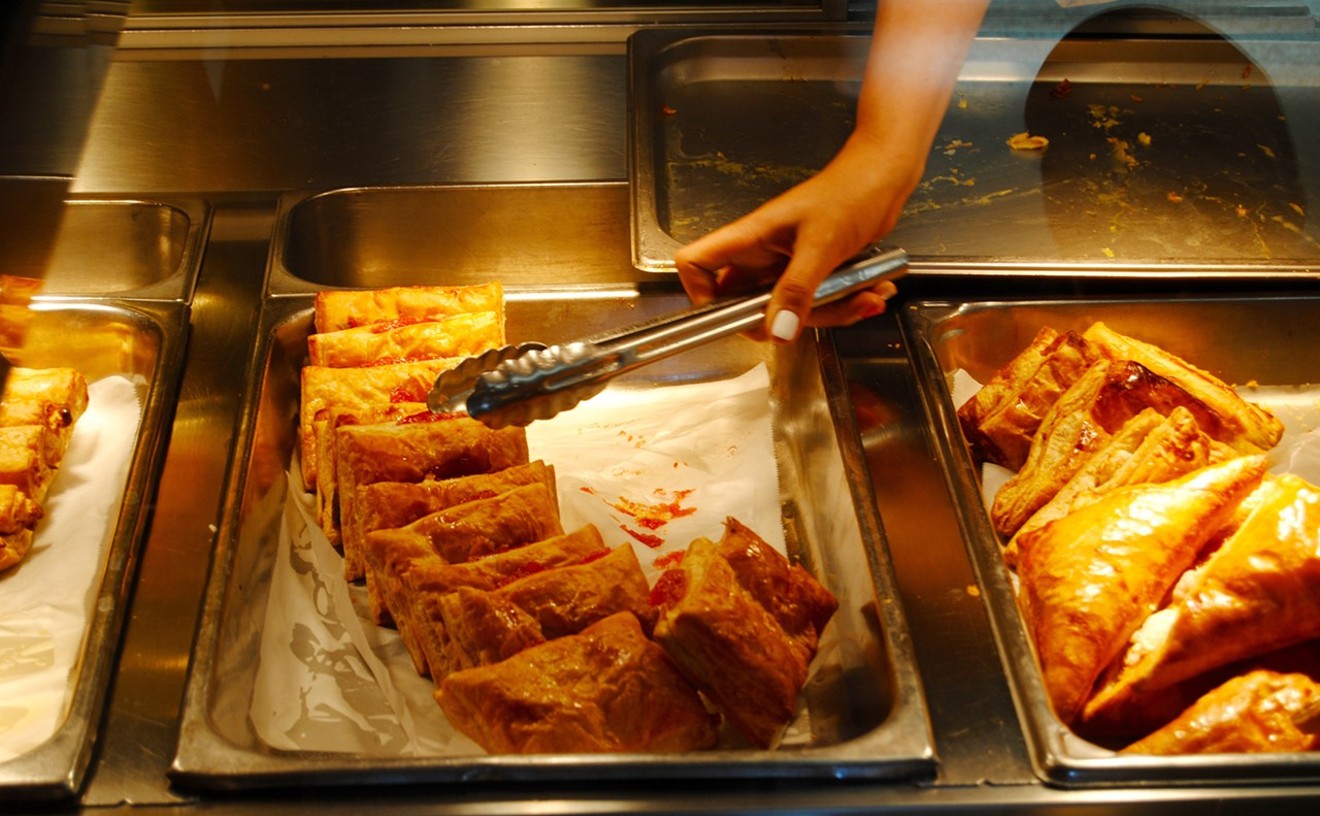 Most early mornings, a line of bicyclists snakes out of Oasis Café, a hole-in-the-wall Cuban cafeteria in Key Biscayne. It's one of the first stops on the Key. But the place is not just named after its beachside luxury — it's a beacon of hope, serving affordable and quality Cuban food to Key Biscayne's affluent residents. The empanadas here are the best in their class. A crisp shell gives way to a doughy center, oozing traditional fillings: cheese and onion, spinach, chicken, or beef. For bicyclists and beachgoers alike, this empanada is the handiest option, packing home-cooked flavor into a compact half-moon.