Best Theater for Drama: GableStage at the Biltmore

Back in 1987, Ronald Reagan challenged Soviet President Mikhail Gorbachev to tear down the Berlin Wall. Michael Jackson released Bad. And a couple of hard-drinkin', troublemakin' Citizen Kane wannabes headed East from Phoenix to buy a year-old newspaper in Miami Beach called The Wave. They changed the name to Miami New Times, and the writers met in a tiny office on South Beach. Mike Lacey, king of the word, and Jim Larkin, maestro of the almighty dollar, immediately began thinking big, attacking city leaders, and diving into the arts like no other paper before.

A quarter-century later, we're still here, telling the story of the most interesting American city. In this extra-special Best of Miami® issue, we not only list 361 of the finest restaurants, bars, people, and places, but also review some of our biggest stories. There was an investigation that disclosed the United States was illegally siphoning arms to Saddam Hussein during the Iran-Iraq War, a chronicling of Hurricane Andrew's massive 1992 attack on our shores, a story that showed the 9/11 attackers' ringleader had entered the country illegally, a graphic description of arrests at the 2003 Free Trade Area of the Americas protests, and the tale of dozens of sex offenders being forced to live in a colony under a bridge.

History not your thing? You'll learn that the greatest go-karting is in Opa-locka, the best hidden gem of a restaurant is a tiny Asian eatery downtown, the number one happy hour is in the Grove, and the top public art is — where else? — Wynwood. Of course, you'll also find our choices for best athlete, politician, and artist. So read on.

We aren't the only ones celebrating this year. Readers cast far more votes in our Readers' Poll than ever before, almost 12,000 of them. This being Miami, of course, we had to throw out thousands of ballots. See, some voters cheated. But, hey, that's why it's called the Magic City.

He had all the attributes of a winning mayoral candidate: handsome, smart, and connected, as the middle brother of a Cuban-American political oligarchy. And as a reformer on the county commission who introduced legislation creating the Miami-Dade Inspector General's Office, Miguel Diaz de la Portilla had the credentials to clean up county hall. But it didn't work out for him — he lost mayoral bids in 2000 and 2004. So he turned to twisting county commissioners' arms on behalf of real estate developers seeking rezoning approvals and companies wanting to do business with Miami-Dade. He's mighty good at it too, as evidenced by the corporate titans on his client roster: development giant Lennar Homes, leading red-light camera provider American Traffic Solutions, and national heavy hitters such as Ryder, TD Bank, and Walmart. His lobbying career was bolstered by his return to politics in 2010, when he was elected to the Florida Senate, taking his termed-out brother Alex's seat. When his clients can't get their way at the county level, they can count on Diaz de la Portilla to use his influence in Tallahassee to fulfill their agendas there. Talk about bang for your buck.

Pack up the bikes and head west to Shark Valley, where there are no sharks but plenty of sunbathing gators lounging around the 15-mile looping path. It's a nature-filled workout with ample views of pristine saw grass and loads of migratory birds from January to March. What's that, you say? Pedal-pushing your way past gators and birds is sooooo touristy? Well, there's also a decent chance of spotting one of the much-hyped Burmese pythons that are grabbing national headlines. Park ranger Eric Riordan says five of the suckers were removed from the park in December, including one that was 16 feet long. If that's not motivation to keep pedaling, what is? 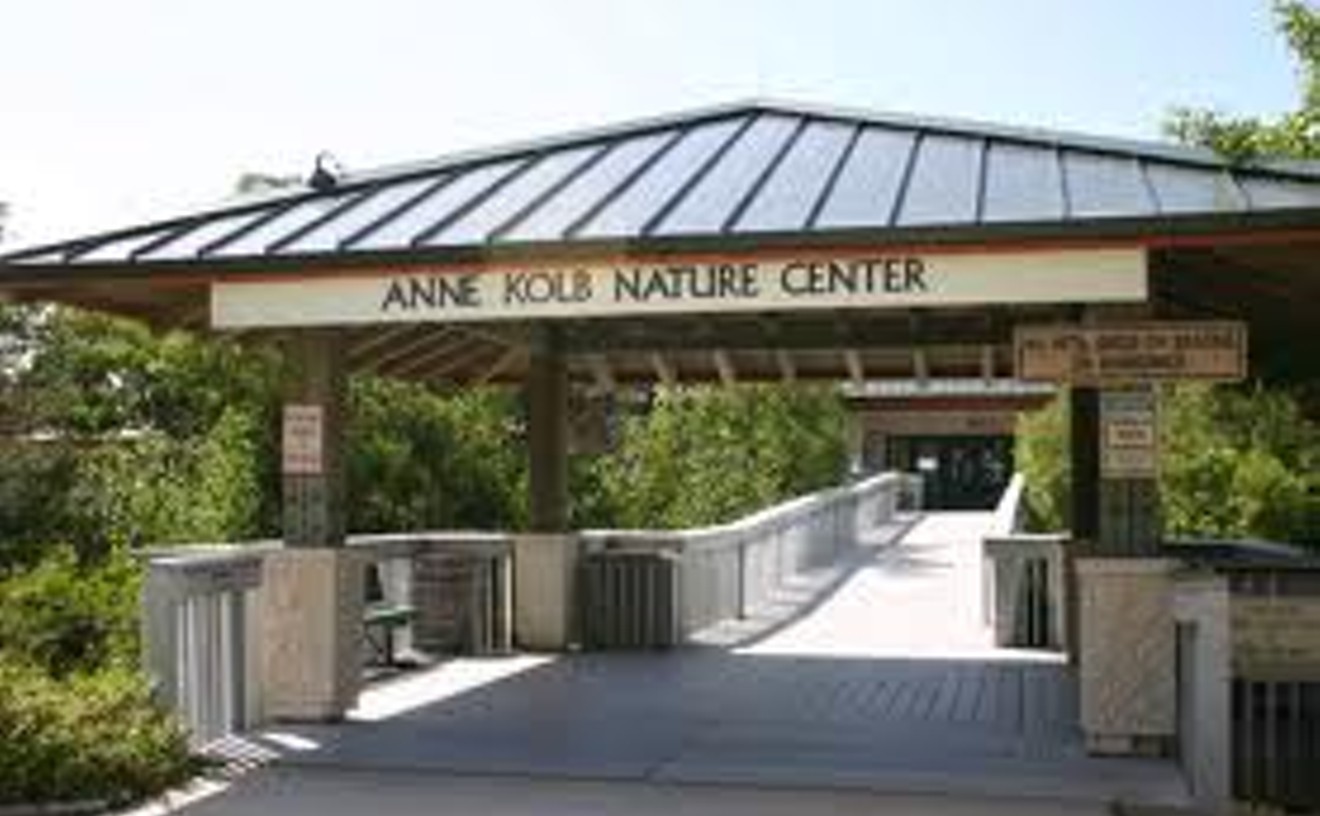 Two minutes in West Lake Park is it all it takes to get away from the asphalt hell of South Florida sprawl. The trip begins with a light paddle down a serene mangrove tunnel — keep your eyes peeled for always-awesome manatees and some nice birds. When the trail empties out onto the lake, it's your choice. Let the boat float, and kick back to relax while soaking up the rays, or cut across the lake — a workout in itself on a windy day — and explore the mangrove-lined, color-coded trails. If it weren't for the not-so-distant skyline peeking over the trees, you might forget you're smack in between Miami and Fort Lauderdale. Prices aren't bad either: Drop $15 to rent a canoe for one hour, $20 for two hours, or $50 for the whole day.

At the risk of foiling any romantic chemistry between us, dear reader, for the purposes of this item we must describe our body. We are approximately 50 pounds overweight and have flat, wide feet. Imagine if a duck mated with Alfred Hitchcock. Now imagine that auteur paddling bird tried his hand (wing?) at basketball one afternoon and badly turned his ankle. Given the weight on his feet, the lack of supporting arches, and the seriousness of the injury, this would be a job for a masterful foot doctor. Especially if — we admit we're stretching the metaphor a bit here — the filmmaking duck had to catch a plane to the mountains of Utah for a hiking trip in two days hence. Let's tell the rest of the story straight: Dr. Gary Curson advised us against making the trip and offered to write a letter to the airline to assist in having the tickets refunded. When we refused, he prescribed industrial-strength ibuprofen, wrapped our afflicted foot like a mummy, outfitted it in an embarrassing boot, and gave us some ground rules for treating the appendage so it wouldn't be permanently damaged. All the while, he cheered us with some pleasantly corny wisecracks. There were no exorbitant charges on top of our insurance payments, and we enjoyed our trip — although we did much more drinking than hiking. Take it from a fat-ass duck: Whatever the opposite of a quack is, that's Dr. Curson.

After serving nearly three decades in federal prison for smuggling pot into Miami, Robert Platshorn would have been forgiven for spending the rest of his free days in quiet solitude. But the 69-year-old former leader of the Black Tuna Gang — which the DEA dubbed his '70s-era stoner collective of pot importers — has instead become one of the nation's most visible proponents of medical marijuana. Perhaps nobody in the world can better rue the irony that marijuana, which has never caused an overdose, is outlawed in most states, while lethal cigarettes and alcohol are freely peddled. Platshorn served more time, doing 29 years of a 64-year sentence, than anybody before or since for a marijuana offense. Since his 2008 release, his life mission has become touting the benefits of medical marijuana — including alleviating pain, quelling nausea, promoting sleep, easing the side effects of chemotherapy, and reducing inflammation — to a surprising but entirely logical demographic: elderly Floridians, whose physical ailments and limited budgets make them ideal joint-puffing self-medicators. Platshorn's "Silver Tour" puts on symposiums for seniors featuring experts and advocates of medical marijuana. Bobby Tuna, as Platshorn is nicknamed, has bought infomercial spots and billboards for the cause. (If you feel like donating to the shoestring campaign, check out his website.) He and others successfully pushed for an upcoming Miami Beach vote to decriminalize pot on the island. It's a shame that Platshorn lost nearly 30 years of his life for selling a natural and harmless plant. But if he succeeds, such an injustice won't happen again.

Your abuelita knew about Genesis Rodríguez long before you knew about her. The Miami-born-and-raised daughter of Venezuelan heartthrob singer José Luis "El Puma" Rodríguez, Genesis has enjoyed an acting career that had its, um, genesis in hammy telenovelas. Think shows such as Dame Chocolate, Prisionera, and Doña Bárbara, in which the male characters are all named Fernando and wear eye patches but not shirts. If we were her, we would have complacently collected the six-figure paychecks for the Spanish-language work until inevitably being cast as creaky old Griselda, the evil and possibly psychic great-aunt. Instead, Rodríguez left home for Los Angeles to try to make it as a mainstream American actress. Her perfect segue came in the form of the love interest in Casa de Mi Padre, Will Ferrell's absurdist passion project in which the world's pastiest man plays the lead in a telenovela spoof filmed entirely in Spanish. Since then, the Hollywood roles have been rolling in: including in the Cameron Diaz romantic comedy What to Expect When You're Expecting and the Arnold Schwarzenegger comeback vehicle The Last Stand, and as the costar of Hours, an indie flick set in the aftermath of Hurricane Katrina. Of course, the 24-year-old's quick stardom has nothing to do with her looks. She's absolutely hideous. Google her if you don't believe us.