Is she a hippie, a gypsy, a nomad, or a crazy, soulful, lovely, lusty Cuban musical genius? All of the above, and a work of art to boot. And if you heard her earlier this year playing live on Michael Stock's folk and acoustic music show on WLRN (91.3 FM), you know the skill and imagination it takes to make a song about sex and pizza so lyrical you can smell it through the radio. Sol has toured Cuba, Jamaica, Costa Rica, and Europe, picking up new life experiences to write about at every opportunity. Her lyrics reflect an infectious passion for life that makes you want to hop a train, swim naked in the rain, and take a plane to Paris. That's the kind of music we like, and she writes it better than anyone else we have ever heard. She just funded her next album through Kickstarter, so we look forward to hearing more soon.

Oi! Die Trying plays street punk — the driving, anthemic, and melodic style of underground rock that encourages gang-vocal sing-alongs from the crowd and revels in the power of a simple and heartfelt delivery. The band features members from Hellhounds, Five Across the Eyes, Unit Six, Vice City Rockers, and Guerrilleros de Nadie — five groups that have helped define the past ten years of Churchill's Pub. You probably missed their first show there earlier this year, but you shouldn't miss their next one. With lyrics about fighting Nazi skinheads, standing up for justice, and sticking by your friends, Die Trying delivers inspirational hardcore that will give you something to think about while you rock out.

On April 1, 1991, the future capo of the intergalactic Raider Klan Mafia was born in Miami. His name was SpaceGhostPurrp. Well, legally, the infant's birth certificate read, "Muney Jordan." But that was just the earthly label forced upon an extraterrestrial creature who crash-landed in Carol City with a mission to get high, hypnotize humanity, make money, and elevate his Klan to another level. Now aged 21 in earth years, he proffers syrupy raps and staticky beats (i.e., "Mystikal Maze" and "Tha Black God") that sound like secret, swaggy messages from some undiscovered planet with a massive surplus of essential resources like cars, cash, hos, gangsta grills, and Purrp-brand promethazine drank. Last year, the Ghost grabbed mad Internet buzz for mixtapes like NASA: The Mixtape; collab'ed with swag superstars Smoke DZA and A$AP Rocky; scored a spot on Miami New Times' Best Albums of 2011 list with Blvcklvnd Rvdix 66.6; and even earned a name-drop in Spin's recent rap issue. But now he's about to blast out his debut studio slab, titled Chronicles of SpaceGhostPurrp. And then, he says, "The prophecy shall be fulfilled."

The genius of Dave Williamson's comedy: It's your life, but funnier. Williamson is an exactly average human being, a man of median age who lives in the burbs with his wife and kids. His height is average, he's neither grossly over- nor underweight, and he doesn't have a big nose or a Gilbert Gottfried voice or, really, any distinguishing physical characteristics. Like you, he enjoys telling stories about his kids, his own childhood growing up in Miami, and hanging out with his college buddies back in the day. But unlike you, his stories are unpretentious, genuinely interesting, and, most important, atomically funny. The normal world in which he lives — in which we all live — is ridiculous enough on its own; he's just especially talented at pointing that out. When your grandfather complains about annoying technology, you groan; when Williamson outlines the differences between the Trapper Keepers of his youth and his kids' iPads, you cry laughing. The details of family life, the trouble with raising children when you yourself are still just a man-boy, learning to amuse yourself at a 3-year-old's birthday party — it's all fodder. Williamson's sets are like the stand-up version of a great sitcom, except he's allowed to cuss and talk about penises. All you have to do is sit back and provide the laugh track.

Main Street Players president Clara Lyzniak has been involved with the small troupe since 1998 and has served in almost every capacity there is at a theater company. But it was her uproarious scene-stealing turn as Zoila in the group's production of Living Out that proves she needs to be on stage more often. Lyzniak's take on the modern Hispanic nanny — heavy accent, big attitude, and oozing with chutzpah — brought hysterical laughter to an otherwise somber and serious play. It was a bit role that served as the story's comic relief, but Lyzniak, who in real life speaks perfect English without a hint of an accent, absolutely crushed it as Zoila. She hilariously massacred the English language and delivered pure, unbridled sass when taking direction from her Anglo employers. The role could have easily been mailed in with a stereotypical portrayal, but Lyzniak knew when to dial it down and when to bring it full bore. The result was a show-stopping performance every time she appeared onstage. Zoila was Lyzniak's first major role for the troupe, taking her away from behind-the-scenes and administrative duties, and we hope to see more of her in front of the audience.

Putting on engaging stage dramas can be daunting for any theater troupe. Yet the diminutive and diverse Main Street Players is always up to the task. Sure, there are bigger troupes that draw larger crowds and cast more accomplished actors for their respective productions. But Main Street Players is special because its commitment is to stories and to telling those stories with hungry young actors and a stage crew ready to expertly build a small apartment or a makeshift park at a moment's notice. The group performs in an amiable black-box theater nestled across from a multiplex and a Johnny Rockets. And it knows how to pack a punch. Even with its limited budget and small working space, MSP understands the play is the thing, and the troupe's commitment resonates in each production. Main Street Players has had many incarnations over the years since opening in 1974 as the Miami Lakes Players Guild, often moving from venue to venue and putting on two or three productions a year wherever it could until the City of Miami Lakes offered the current space. It's a small, talented, and versatile group that doesn't mind taking on challenging plays such as the controversial Extremities, the deeply layered Living Out, and the provocative Closer. Plays with such driving and stimulating narratives would normally be shortchanged and curtailed by the quirks and limitations of a small local theater troupe working on a tiny stage, but Main Street Players is the little theater group that could, and it knows exactly how to give audiences a rich and rewarding theater experience.

Formed in 1971 at the University of Miami by the late T.G. Cooper, the M Ensemble has always had the goal of promoting African-American culture and experiences through the performing arts. Beginning at the Edison Community Center and going through many incarnations, with plays performed in schools, churches, and libraries, the troupe has made a deep and lasting mark in the community. With an unmatched, ambitious fervor to expand the boundaries of theater and expose Miami to talented and prolific African-American playwrights such as August Wilson and Djanet Sears, the M Ensemble has never been afraid of taking on profound and subversive plays and turning them into lively and engaging productions on a shoestring budget. With recent productions such as the complex and moving Radio Golf, a play that delved into the complicated parameters of embracing the promise of the present while sacrificing the past, and Harlem Duet, a stirring modern slant on Shakespeare's Othello, the M Ensemble continues to stretch itself and, in doing so, remains not only Miami's premier African-American theater company but also one that's unmatched by others.

TP Lords can serve up just about anything. One night she's offering traditional glam girl and the next she's on some avant-garde Leigh Bowery-type trip. Hell, she can even do Beyoncé realness with the best of them and then go backstage and emerge as some sort of neon creature who looks like a cross between a club kid and a space empress from Planet T. TP has drag versatility down. Otherwise known as Alex Velez, TP is the mother of the House of Lords when she's not performing multiple times a week at places such as Twist, Discotekka, Sugar, and the Palace.

Have you ever been moved to tears while watching a 300-pound ex-felon in a wig lip-sync Aretha Franklin's "Natural Woman" to her fake baby bump? If not, you clearly haven't been watching the fourth season of RuPaul's Drag Race, featuring breakout star Latrice Royale. She fell just short of winning the crown, but she certainly won our hearts. Before being cast on the Logo network's reality show, Royale — AKA Timothy Wilcots — pounded the pavement outside the Palace in South Beach after turning her life around following an 18-month prison sentence on drug charges. In addition to the harrowing backstory, Royale had all the makings of a reality TV phenomenon with her own catch phrases (ask her about the five G's), a signature laugh, a warm and caring personality, and a remarkable stage presence. In her own words, "She is chunky yet funky. The bold and the beautiful. She is Latrice Royale." 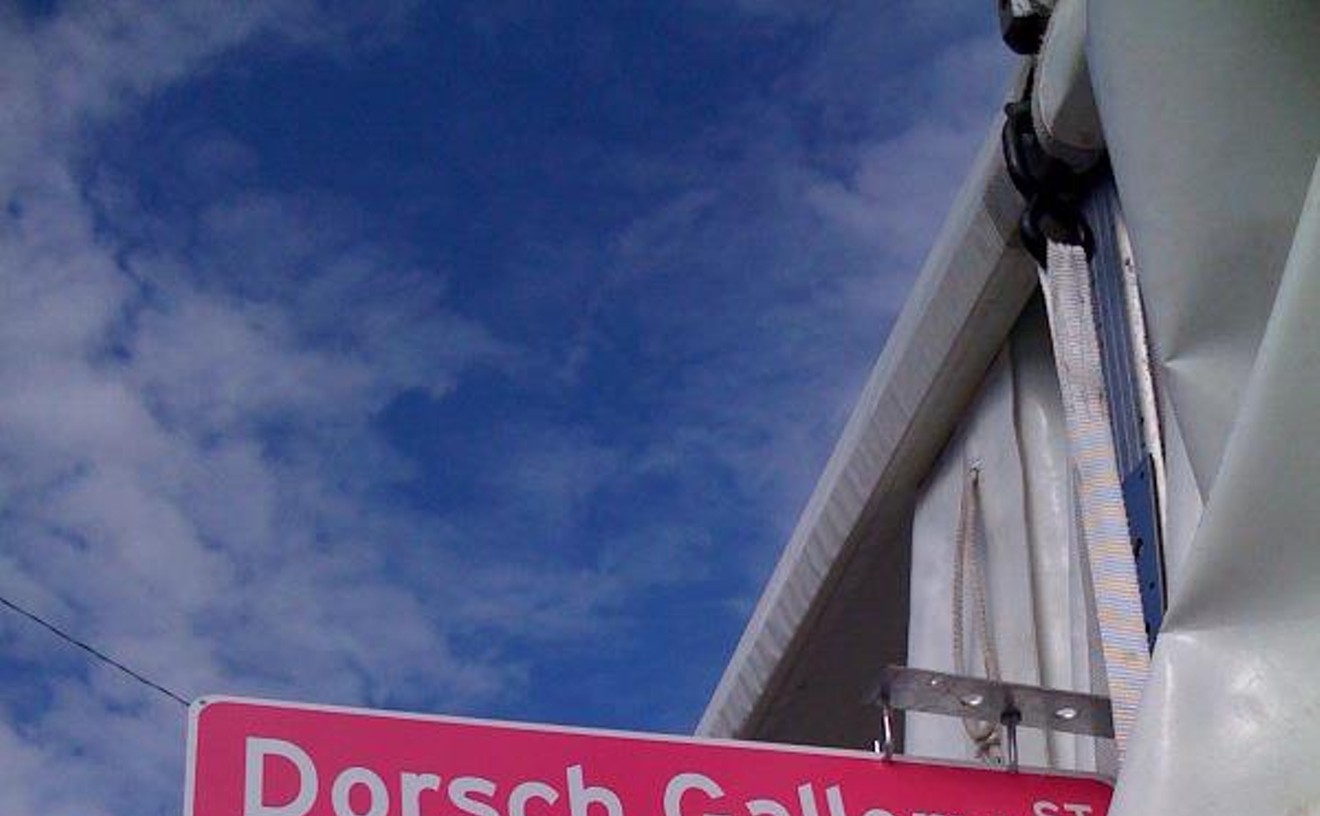 As a street artist, Brandon Opalka has been using Miami's façades as his canvas since moving to town in 1996. Without the urban sprawl, Opalka would have no medium, but paradoxically, it's the natural world that inspires him. His latest massive mural, Changing the Way We Breathe, completed in late 2011, reminds us to take care of our silent organic friends and highlights the sacrifices that come with modern living. Brilliantly colored and intricately detailed, this 115-foot masterpiece has a prophetic and ghostly quality, as if telling us to care for our planet as a means of caring for ourselves. Engulfing the length of a wall, the painting features a swirly, almost trippy semitruck belching fire and smoke while toting a chopped-down redwood on its way to the mill. The background is just as colorful and chaotic, meant to give the impression of an "apocalyptic world without trees," according to Opalka. It's inspiring for its attention to detail and breathtaking to behold, a gorgeous addition to Wynwood's colorful neighborhood. For Opalka, whose work is featured at Wynwood Walls and the Dorsch Gallery, it's also a triumph of nature as street art.