Shad Gregory Moss, the artist formerly known as Lil' Bow Wow, is a man-child of many talents. He raps, he acts, he tweets while driving drunk through the streets of Miami Beach. And this Sunday, Bow Wow will show off his on-court skills (see 2002's orphan-becomes-NBA-superstar flick Like Mike) in a game of Celebrity Basketball against fellow hip-hoppa-turned-thespian Nelly.

Back when Nelly first challenged Bow Wow to a b-ball battle, the younger rapper responded in rhyme: "I accept your challenge/Ima get in your ass/Grown men in the paint/Pin your shit to the glass." It wasn't especially classy, but will this psychological warfare pay off? Catch Mr. Wow and his Cash Money Millionaires vs. Nelly's Derrty Entertainment at the BankUnited Center to see whether trash talk really works.
Sun., March 14, 5 p.m., 2010

There are a lot of things that are awesome about Art Basel week, only one of which is actually Art Basel. In between staring at five-digit price-tags for paintings we'll never buy and making awkward conversation with socialites, we'll be headed to Arts for a Better World -- a 40,000 square foot exhibit at Wynwood's Soho Studios. Here, you can create your own crazy installations out of reusable materials, witness scientific experiments translated onto canvas, and support charities looking to erase the line between creative expression and action. Over 40 artists from all over the world were selected by curators to present their work at AFABW. Several Americans made the list, including animal portrait artist Joe Zammit-Lucia and Miami-based surrealist graffiti artist Brandon Opalka. There will also be a tribute to Haiti from a consortium of Haitian and Haitian-American artists. Asser Saint-Val will present paintings inspired by scientific and sociological studies involving melanin, the biological pigment that determines skin color. "The ambiguous forms are a metaphor for the mystery of melanin, and they are anchored by the presence of arms and legs in motion," he says about paintings made with pastels, acrylic, and water color in addition to coffee, flour, tea grains, and food coloring.
Dec. 1-4, 11 a.m.-7 p.m.; Sun., Dec. 5, 11 a.m.-5 p.m., 2010

A Bite of Bittman

What if you were offered the chance to frolic around Spain eating delicious food with a famous actress? You’d say yes. But let’s say that actress is Gwyneth Paltrow. Would you reconsider if you had to listen to Coldplay the whole time? Who knows what music brilliant food writer Mark Bittman and Gwynny were listening to while filming Spain: On the Road Again, but it’s easy to see why people love Bittman’s dry humor and honest approach to food. Each week, he schools the masses how to cook healthfully and simply in “The Minimalist,” his New York Times food column. This Wednesday, the James Beard Award-winning Bittman will be in town promoting his newest book, The Food Matters Cookbook: 500 Revolutionary Recipes for Better Living. Learn more about sustainable eating at the Books & Books-sponsored reading at Fairchild Tropical Botanic Garden at 6 p.m.
Wed., Oct. 6, 6 p.m., 2010

While the Miami Heat's Mario Chalmers remains the starting point guard, he continues to struggle with a severe case of the suck on a night-to-night basis. So, to offset this, the Heat traded Chris Quinn and his 1.2 points per game for Rafer Alston from New Jersey. A former streetball legend known as "Skip to My Lou," Alston returns to the Heat with a 9.7-point and 3.0-assist average on the season. Not great. But it could be that these numbers are just a case of playing for the crappy-ass Nets. Alston went three-of-nine for ten points and four assists in his Heat season debut, so probably not. In the meantime, Carlos Arroyo with his 11.1 points per game has been relegated to third-string. The numbers suggest Arroyo is a better option than Alston. But he doesn't have a cool nickname, so his numbers can suck it.

A Brief Foray into Cinema

In its, pardon the pun, short history the Miami Short Film Festival has established itself as one of the premier and eclectic film exhibitions in the city. This year the festival, which starts Saturday and runs through November 20, has expanded to screen films at the Coral Gables Art Cinema (260 Aragon Ave., Coral Gables) and Miami Children's Museum (980 Macarthur Cswy., Miami), where children's shorts will be screened, while still retaining the Tower Theater. The gurus of the festivals have eschewed the rigidness that smaller festivals often adhere to, choosing instead to program sections ranging from highlighting revolutionaries, dance, supernatural, and sexual exploration with more traditional categories like documentary and international showcases. Living up to its 'Keep it Short' motto, no program at the festival runs longer than two hours, making it feasible to take in two programs in an evening without succumbing to the illness that plagues long film festivals all too often: a numb posterior. Tickets cost $7 for programs at The Tower Theater and $10 for programs at Coral Gables Art Cinema. Screenings at Miami Children's Museum are free. A VIP pass allowing access to all programs is available for $50.
Mondays-Sundays, 7 p.m. Starts: Nov. 13. Continues through Nov. 20, 2010

A Cure for Loneliness

It's the night before Valentine's Day. Don't get sad; head to the Love Rx show at the Respectable Street Café (518 Clematis St.) in West Palm Beach. The girls of the Modernesque Burlesque troop — Ms. Ardis, Audry Rose Lautrec, Isadora Bull, Francean Fanny, Lady Phoenix, and Pixie Deville — will present a show to distract you from all of your crushing loneliness. Their stage style is classic burlesque with a modern twist; don't worry, they'll be brandishing plenty of tats and Bettie Page bangs. Flaunt's own DJ duo, RAZmaTAZ, will start the night off with indie dance favorites. Tickets cost $5 in advance or $10 at the door.
Sat., Feb. 13, 10 p.m., 2010

We're blind from the neon Lycra of Miami's cyclists. And frankly, we're a little weirded out by their alien-like pointy helmets. No need to fear the road this Saturday for cyclists will look like Victorian bankers with knee socks, vests, and caps. We might even stop and offer them a pint of Fuller's or a hot toddy. The Green Mobility Network is hosting a Tweed Ride this Saturday through historic Coral Gables. Professor David Rifkind, from FIU's School of Architecture, will tell cyclists all about what they see. In the words of the organizers, "A proper cyclist looks good from head to toe: from the dashing cap, to the silk scarf, ascot, or bow tie accenting the neck, to the snappy knickers or skirts, and argyle socks! Prizes shall be furnished to the most dapper chap, the most snappy lass, the best real moustache, the best fake moustache, and the best vintage/antique steed."
Sat., March 20, 9 a.m., 2010

The Florida Marlins' Jeffrey Loria might be known as one of the cheapest owners in baseball, but a look at his track record shows he's not without generosity. Over the years, he has rewarded his players with gold coins, a blessed Saint Christopher medal, a diamond pendant, a Mercedes, and a gold-plated baseball bat. (OK, we made up that last one.) So it came as no huge surprise when Loria awarded Phillies pitcher Roy Halladay the pitching rubber and the last baseball used in the game after his perfect game May 29. But because he isn't a Marlin, neither memento was dipped in gold.

This Tuesday at 7:10 p.m., the Texas Rangers will visit Sun Life Stadium to kick off a three-game interleague series against the Fish. The Rangers, formerly owned by President George W. Bush, are in the thick of the AL West playoff hunt. The Marlins, too, are in the middle of a pennant chase, grouped tightly with the rest of the NL East.
Tue., June 15, 7:10 p.m., 2010

Hoods and thieves are good friends until it’s time to divvy up a million dollars’ worth of stolen diamonds. Then the backstabbing, double-crossing, and murdering begins. In John Huston’s 1950 heist movie, The Asphalt Jungle, a newly released convict named Doc Erwin Riedenschneider (Sam Jaffe) plots his comeback caper, gets financing from a crooked lawyer (Louis Calhern), and recruits a gang of pros, thugs, and hunchbacks to carry it all out. The result is a brutal and bloody 112 minutes: A jewelry store gets jacked, an alarm gets tripped, a weak link turns rat, the money man goes rogue, and bodies start dropping like dead trees. The Asphalt Jungle will be shown this Saturday at 7:30 p.m. as part of the summer screening series at Viceroy Spa at Icon Brickell. Now, a footnote: Watch out for 24-year-old, prestardom Marilyn Monroe as Emmerich’s spoiled mistress, Angela Phinlay. She’s beautiful, blonde, and dangerous.
Sat., July 17, 7:30 p.m., 2010

A Life in Pictures

A delusional actress shoots her boy toy and then mistakes the news cameras for those of a movie set: “I’m ready for my closeup, Mr. DeMille!” But in stark contrast to Sunset Boulevard’s Norma Desmond, director Cecil B. DeMille actually survived Hollywood’s transition from silent movies to talkies without flipping out. His first successes were silent classics such as The Squaw Man, Brewster’s Millions, Joan the Woman, and Don’t Change Your Husband. But even with the advent of sound, DeMille flourished with The Ten Commandments and The Greatest Show on Earth, which won the 1952 Oscar for Best Picture.

In a new book, Empire of Dreams: The Epic Life of Cecil B. DeMille, biographer Scott Eyman relies on previously unreleased family papers to fill in the holes of the director’s personal life. Maybe there’s a Sunset Boulevard-worthy breakdown in his past after all.
Wed., Sept. 8, 8 p.m., 2010 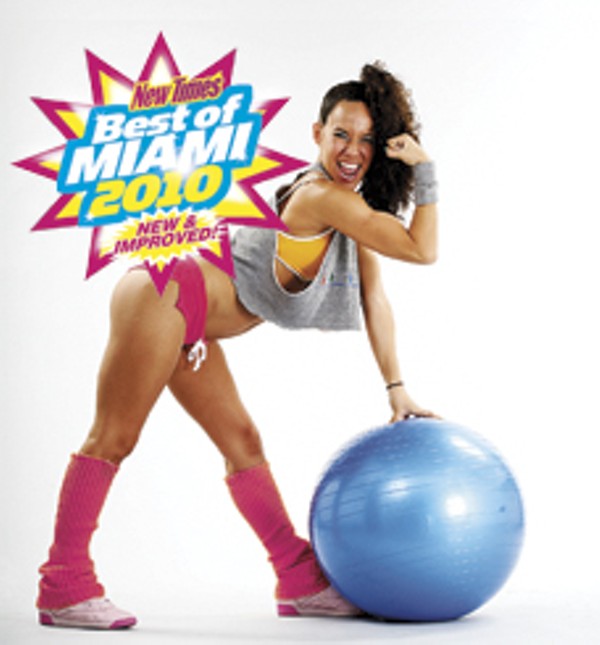