In South Florida, the notion that there's such a thing as a first-rate politician is hard to swallow. But Garcia is simply good at what he does. For a while he's been the brain behind Miami-Dade County's Democratic Party, a liberal group if ever there was one. Before that, he oversaw the Cuban American National Foundation, a more conservative bunch. And he's served on a number of appointed boards — generally somehow remaining acceptable to both ends of the political spectrum. He's smart, frank, and ballsy; we're talking about a guy who's willing to call an El Nuevo Herald reporter a douchebag in front of a roomful of reporters. Now Garcia, who's challenging U.S. Rep. Mario Diaz Balart, has a little scheme. He's going to turn all the red Cuban-American congressional seats blue. As Barack Obama heads toward a showdown with that dinosaur John McCain, Garcia and fellow Democrats Raul Martinez and Annette Taddeo are tailing him. If the top Democratic gun is faster, his whole gang might triumph too. Perhaps there is something to this "change" business.

It's no wonder so many arts organizations have paid obeisance to Sanford and Dolores Ziff. At 83 years young, the Sunglass Hut founder and the former Bond girl rule the Miami art world from their private box in the Ziff Ballet Opera House at the Arsht Center. And these two have given money to promote not only culture but also education; in fact the University of Miami, Florida International University, and Nova Southeastern all have buildings named for the pair. Just because they were born in 1925 doesn't mean they can't drop it like it's hot. Despite their senior-citizen tag, the Ziffs party with the best of them; Sanford has been known to do keg stands while Dolores tries out the latest Soulja Boy dance. This dynamic duo sure knows the joy of life. They've helped fan the flame of Miami's cultural renaissance and then wangled themselves invitations to the best bashes that celebrate this very same revival! 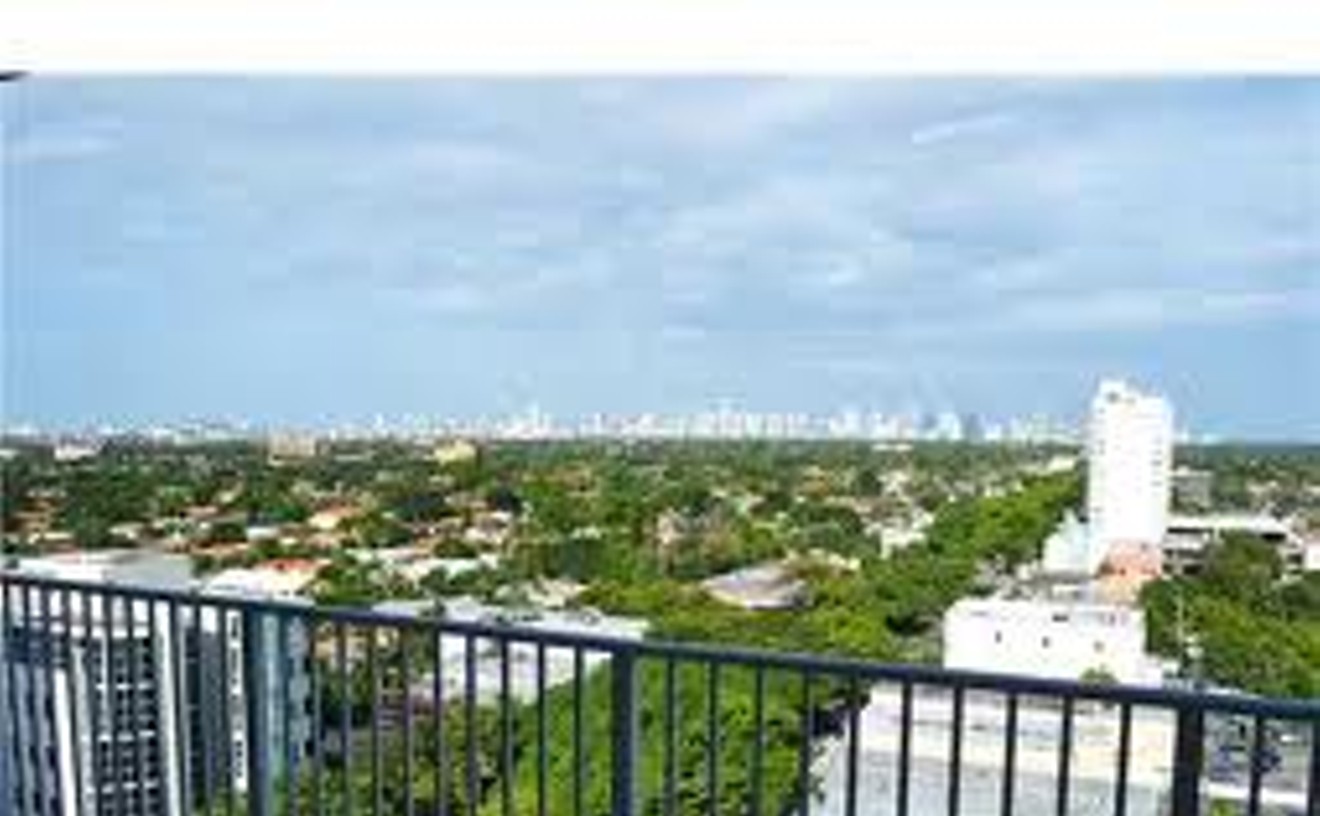 There's nothing particularly fancy about this park — which is what makes it so great. You can almost always bet that at least one of the three tennis courts is going to be open and that your toddler will have enough jungle gym space to carve out his own little fiefdom. About the most you'll have to worry about on a bright, sunny day is a band of 13-year-old boys ragging on each other under a basketball hoop.

If nothing else, enjoy the town's finest taco truck — a regular weekend installment. Or bring a picnic. There's something about the place that just feels warm and nice. Bachelor though you may be, the park will make you tingle with the thought of whiling away an afternoon with a brood all your own. 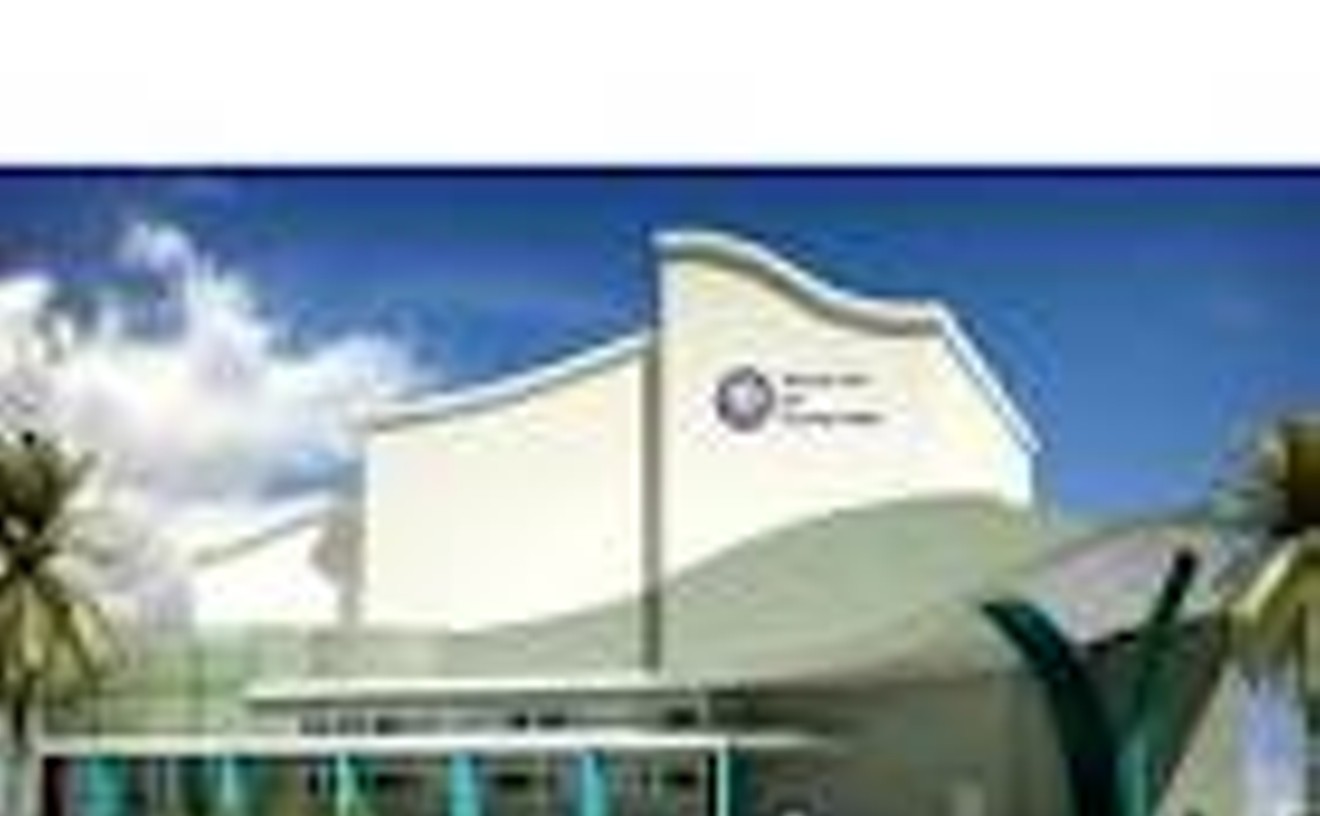 There's art, books, a view, a card game, and a public toilet — a darn clean one at that. Life doesn't get much better. Perched in the clouds in the Spanish-style plaza atop the Miami-Dade Cultural Center, a set of often-sparkling public restrooms connects the county's main public library and the ever-evolving Miami Art Museum. It doesn't seem to matter that the homeless population is wise to it. The place remains free of nastiness, stray papers, and your usual public shithouse detritus. So head downtown, drink in some art at the museum, borrow a book at the library, and sit in for a round of cards with the boys on the patio — then head to the head and spend some time relaxing in the only place modern man (or woman) ever finds peace.

In today's Miami-Dade County, the Village of Miami Shores is a throwback. Families have lived there for generations. There's a golf club that still has the dowdy but cozy feel of the Sixties. And the Fourth of July celebration makes you feel patriotic just like Americans did back then. But the one thing that has long-marred the village's perfection is the downtown area along NE Second Avenue, a series of shabby storefronts and lawyers' offices. Well, those days are gone. For the past few months — and likely for months to come — workers have been tearing up the street to install wider sidewalks and underground sewers to replace drain fields. This all sounds rather quotidian, but it means the "Village Beautiful" will soon be home to sidewalk cafés, restaurants, ice-cream shops, and other joints to go along with the recently added Starbucks and Playground Theatre. It's a pain now, but the future looks, well, beautiful.

Maybe ole Don didn't know what show he was on. The Coral Gables mayor was tapped to comment on the city's ban on pickup trucks on Comedy Central's The Colbert Report for a February segment called "People Destroying America." No, Slesnick is not the one destroying America; that honor goes to Lowell Kuvin, who has been fighting the town for years for the right to park his pickup truck at home overnight.

Here's what the City Beautiful's honcho had to say about the narcotic effect of those four-wheeled menaces: "It's pickup trucks today, tomorrow it'll be larger trucks, and then the next day probably commercial vehicles, and finally we might have swamp buggies out in the street."

There are many good reasons to leave town in July. The sun is relentless, the humidity high, and afternoons are plagued by sudden thunderstorms of biblical proportion. But those who migrate north miss out on the splashy summer transformations at Miami Metrozoo. Chill out at the chimpanzee-activated sprinklers: When the primates pull a handle, they douse visitors in the S.O.A.C. (Sprinkler Offense Area/Chimpanzee) Zone. Cooling mists also provide wet relief between glimpses of other exotic animals. And there's a new giant water-shooting mushroom near the spotted hyenas, in addition to the spouting frog, pink flamingo, and seahorses around the park.

The local artist created a mobile video installation from an old patrol car that cruised local streets during Art Basel and earned a trip to Houston's Art/Car Museum this spring. Gagnon's Border Cruiser, about the plight of illegal aliens, featured rear-window video projections in which a Brazilian man related his ordeal of illegally entering the United States. On the eve of the Super Tuesday primaries, the vehicle brought a news crew from the Al Jazeera English network to a halt in Little Havana, where the befuddled journalists filmed crowd responses to Gagnon's rambling opus.

The Fillmore Miami Beach at The Jackie Gleason Theater 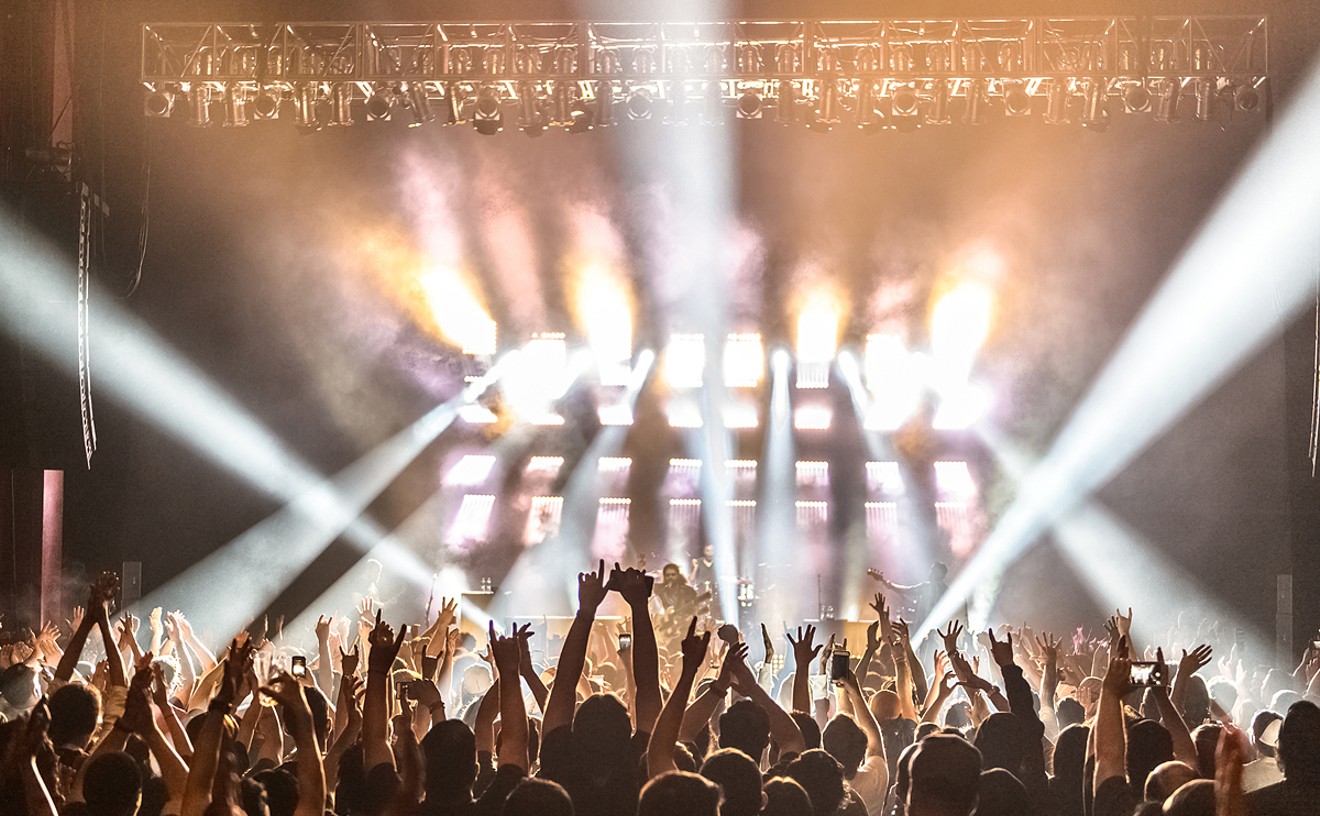 Hipsters usually scream in horror — often with good reason — when corporations muscle in on their turf, but this one time, they might be wrong. Live Nation's takeover of operations at the storied Jackie Gleason Theater may just be the best thing to have happened entertainment-wise since the Great One appeared at the Miami Beach Auditorium in 1964. Live Nation spent about $4 million to transform the location into a contemporary concert space. Attendees are thrilled at how much nicer and enjoyable the place is. But the best part is the booking; popular artists now fill the schedule. No longer are there only school graduations, low-rent comedians, and the occasional foreign musician. The theater is now part of the Fillmore family of venues, which originated in San Francisco during the flower-power years. It's a much sweeter deal than paying Cirque du Soleil to turn the place into a creepy jugglers' paradise. Real groovy, man. 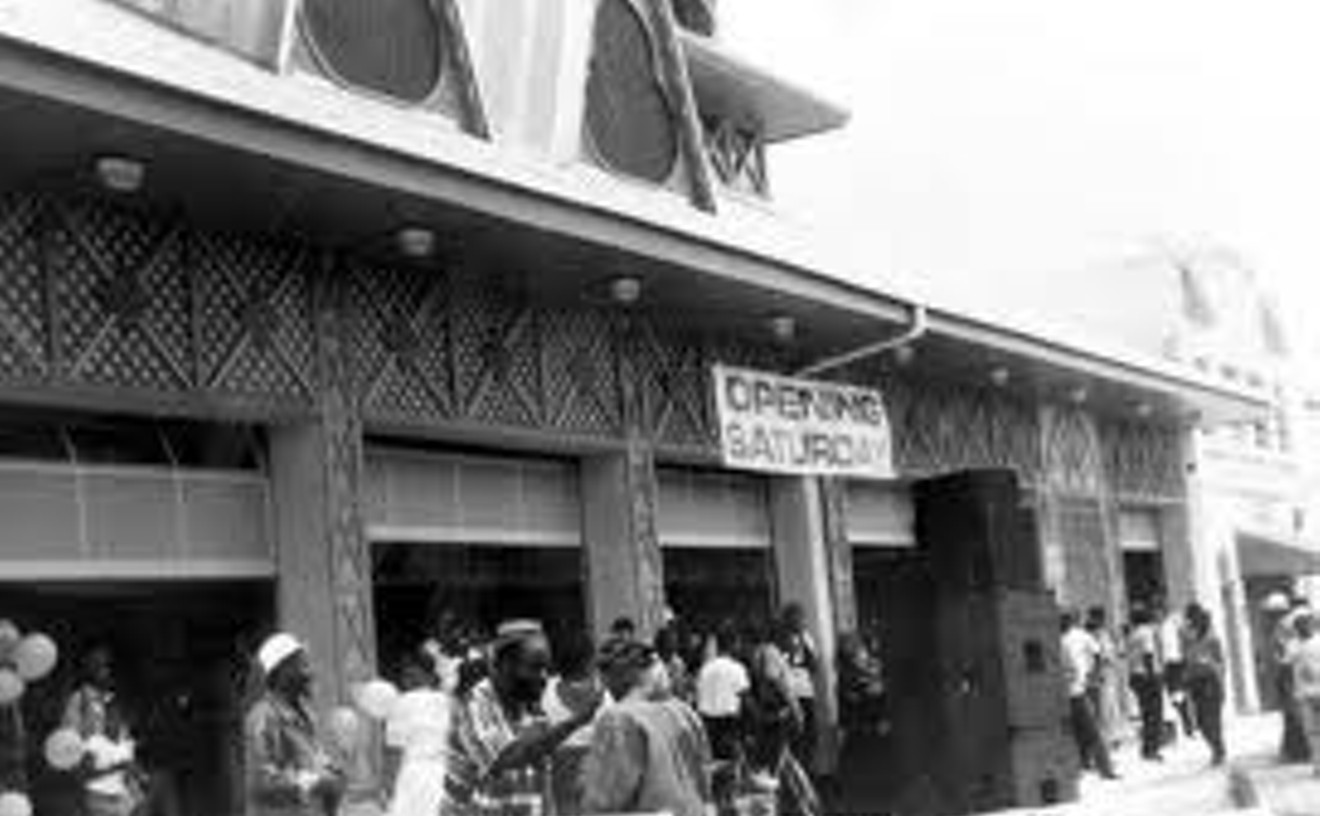 When New York Times reporter Bruce Weber came to Miami in 1999 to do a story about Little Haiti's art community, he described the nascent effort to renovate the Caribbean Marketplace, not only to save the building itself — only nine years old then, it was well on its way into, as Weber said, "decrepitude" — but also to establish a cultural center for the neighborhood. Another nine years have passed and that dream is almost realized. The award-winning design by Haitian-born architect Charles Harrison Pawley once again looks like the building it's modeled after, the famous Iron Market in Port-au-Prince. And the new construction in back, at the time of writing, was very close to finished. Redesigned by the Zyscovich firm, the new site will soon be home to a theater/auditorium, a dance facility, a community meeting room, gallery space, a darkroom, a computer workroom, and a kiln. In conjunction with the soccer fields on NE 62nd Street and Second Avenue, this revitalized site will finally give Miami's Haitian community respectable facilities for sport and cultural events. At 50,000 strong, it's about damn time.