This is the fifteenth edition of the Best of Miami. Fifteen years. Can it be? Can a decade and a half really have zoomed by since we awarded Best French Restaurant to Le Festival? Or decided that Little Nicky and the Slicks was the Best Local Blues Band? Or predicted that the Best Local Band with a Future would be the Mavericks? Anyone remember the Avenue A escapades (Best Traveling Party)? How about the Eagle's Nest bar above the Sand Dollar restaurant at the Silver Sands Motel on Key Biscayne (Best Place to Drink in the Afternoon)?

Gary James's Avenue A parties are now the stuff of legend. Hurricane Andrew took care of the Eagle's Nest. And Le Festival is just a memory, though a delectable one.

But Nicole "Nicky" Yarling is still going strong. Just two months ago Raul Malo and the Mavericks appeared before a wildly enthusiastic crowd at the South by Southwest Music Festival in Austin. And another item from that 1990, inaugural Best of Miami still resonates. Best Miami Euphemism: "It's never dull. Most commonly employed during conversations between transplants to Miami and their worried friends and relatives back home. Translation: My neighbors were just busted by the DEA, my car has been broken into again, five city commissioners were indicted last week, and someone's been placing headless chickens at my back door."

Of course there have been other reassuringly immutable objects amid the turbulent changes that have buffeted Miami over the past fifteen years. Churchill's is still a great rock club. The black bean soup at Puerto Sagua is as savory as ever. El Palacio de los Jugos continues to make killer Cuban sandwiches, and Versailles is perhaps the world's most famous Cuban restaurant (in Miami, that is). The Athens Juice Bar on Collins Avenue is still squeezing fresh fruit. And this year, for the umpteenth time, we cheerfully acknowledge that Books & Books remains Miami's best bookstore. Our readers have displayed surprising consistency as well. In voting for their own Best of Miami winners, they once again have awarded Best French Fries to (who else?) McDonald's. Best Beach? As always, it's South Beach, just as Key West is Best Weekend Getaway. Christy's restaurant in Coral Gables is the perennial winner of Best Caesar Salad. And for the umpteenth time readers declared Gloria Estefan to be Best Local Girl Made Good. You'd think that fifteen years of consistent failure would discourage potential ballot-stuffers. But nooooooo. Take Rex Art Supplies, for example. We didn't have a category for Best Art Store, so the good folks at Rex corrected that with 39 photocopied ballots signed by, among others, a remarkable number of full families. Nor did we have a category that was tailor-made for the Shin Wellness Center. Not to worry. Someone there took care of the oversight by making it easy for 48 individuals to simply sign their names on premarked ballots nominating Shin as the winner of Best Category We Didn't Ask. Those efforts, ambitious though they may have been, were distant runners-up to our pick for this year's Best Ballot-Stuffer. Best Gym? Who knows? We didn't ask readers to vote on such a category. But according to 157 people from all over town, we should have. And the winner should have been Zone Fitness Centers. Among the many other suggestions for Best Category We Didn't Ask, a few stand out as emblematic of this weird and wonderful place we call home: Best Criminal Done Good, Best Spot to Paint Graffiti Illegally, Best Place to Buy Liquor If You're Underage, Best Way Not to Die From Extreme Heat in the Miami Summer, Best Reason to Live in This Hellhole, Best Way to Escape the Latin Influence, and our favorite: Best Local Cross-Dresser. 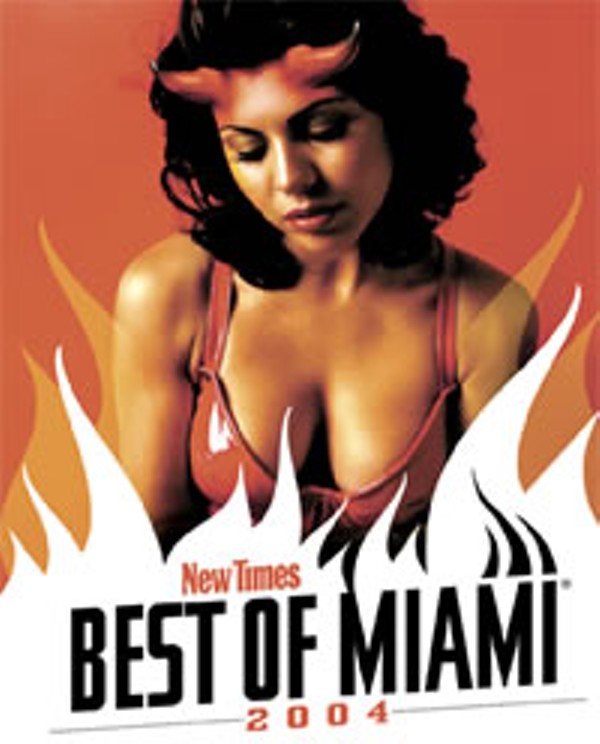