Lynda Hull: "Sometimes after hours of wine I can almost see the night gliding in low off the harbor." Judith Berke: "The trees were wine and the sky was wine, and everything that wasn't the wine, was wine." Heather McHugh: "The wine glass fills with sun, a slow bright bomb. The mob in me sits still." So you see that the poets have spoken, and once they have spoken, must in some way be heard. Who was listening? Vino in Coconut Grove. Vin Amante and Flûte in South Beach. Joseph's Brasserie and Wine Bar in Sunny Isles. These wine and champagne bars, among others, have heeded the call to the vine and debuted within the last year to offer restless Miami residents a welcome alternative to martinis. Consider them the natural alternative to Ritalin. And now the mob in all of us can sit still. 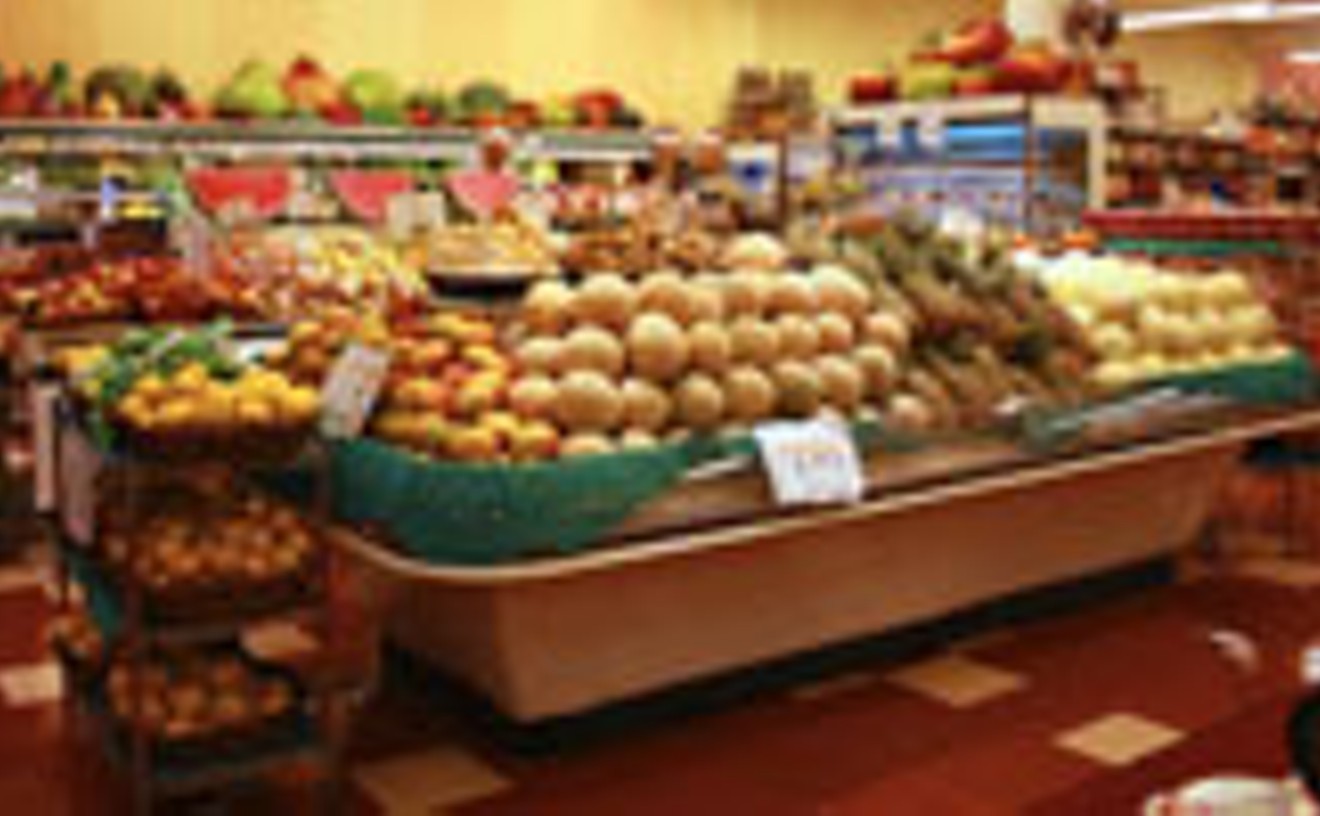 Alejandra Cicilia
Since both Zabar's and Fairway selfishly expanded their Manhattan stores rather than open branches down here in the sixth borough, Epicure wins this one again. Norman Bros. has more and better produce (designer lettuces like frisée and mâche; genuinely ripe tomatoes) at better prices; Gardner's has more interesting homemade dips and spreads; Arnie & Richie's has more succulent smoked fish; Laurenzo's has a more extensive and reasonably priced selection of wines, fresh fish, meats, fresh pasta, and Italian groceries. But when you consider Epicure's astonishing cheese selection, a bakery that carries everything from bagels to birthday cakes, a vast array of prepared foods second to none, an ever-expanding variety of ethnic specialties (including a recently added chorizo that will reduce Spanish-sausage lovers to tears), general variety (there's even a small but interesting selection of cookbooks), and overall high quality -- albeit at high prices -- it's undeniable that Epicure is still the best all-around, one-stop source for gourmet groceries. 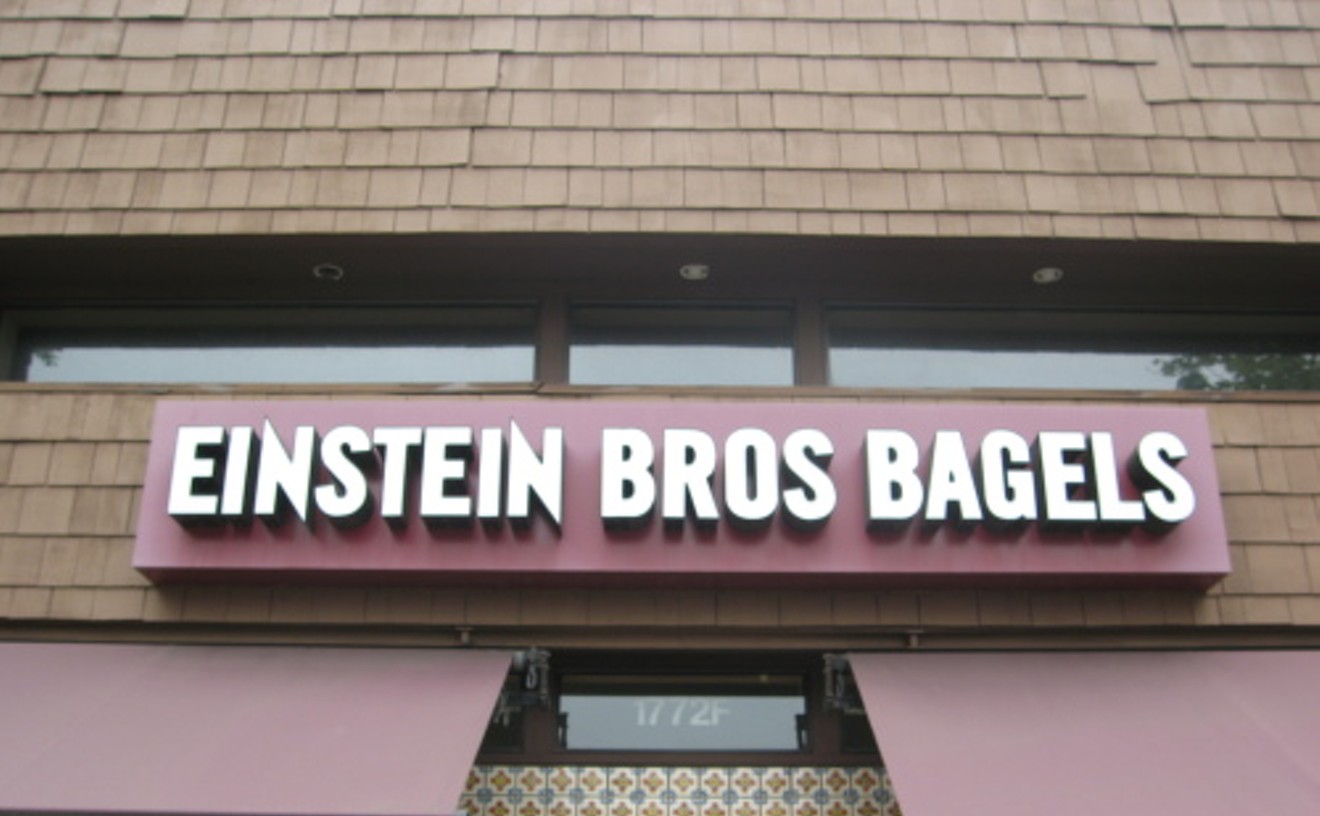 There is a secret to serving good coffee that goes beyond the beans, the roast, and the water. Here it is: temperature. And those comical, corporate Einstein Bros. have figured this out. So they start each pot with a blend of Central and South American beans, roasted to a light brown, and they brew the java with water that is between 190 and 205 degrees Fahrenheit. (For those who skipped middle-school science: The boiling point of water is 212 degrees F.) Then, when the coffee is made, specially calibrated heaters under each urn hold the coffee at 175 degrees. That's hot. Oh, and if the brothers' employees are paying attention to company directives, they are also brewing up fresh coffee at least every hour, even if that means dumping out a full 1.5-gallon urn, according to Ron Savelli, the chain's vice president of menu development. Of course bagels, sandwiches, and soups are also available. But the allure here is coffee. Hot and fresh, Mel's Neighborhood Blend is perfection.

Black-truffle-stuffed tubes of foie gras, $58 bottles of aged balsamic vinegar, tiny round tins of salty black fish eggs -- these are pleasant things to consider, especially if you're sitting at a marble counter, nibbling a delicious smoked-salmon-and-cream-cheese sandwich and contemplating the department stores around you as they employ entirely new adjectives to describe pants. This is something you should do if you find yourself caught in mall land, feeling a bit light-headed and susceptible to the marketing onslaught. Find the Caviar & More kiosk. Order one of the array of small sandwiches served on French rolls, such as the aforementioned salmon for $2.29, a cheese manchego for $1.92, or even the foie gras sandwich for $12. There is also a caviar menu, with one- or two-ounce portions served with toast points, maybe a little crème fraîche. The caviar runs from a modest $6.50 an ounce for salmon roe to top-of-the-line Beluga (here the Huso Huso, a "smooth and pearly" Russian caviar that costs $71 an ounce if you eat it at the counter).

This is for sure a men-in-suits from an around-the-way Brickell firm kinda place. But the Capital Grille is also known for classic steak-house cuisine amid relaxed elegance, raising steaks to a level of excellence. In state-of-the-art meat lockers, short loins of beef are naturally dry-aged for fourteen days in a temperature- and humidity-controlled environment. Steaks are hand-cut daily, well seasoned, and grilled to desired temperature. The result is an extraordinarily flavorful and tender steak you'll probably need help finishing. 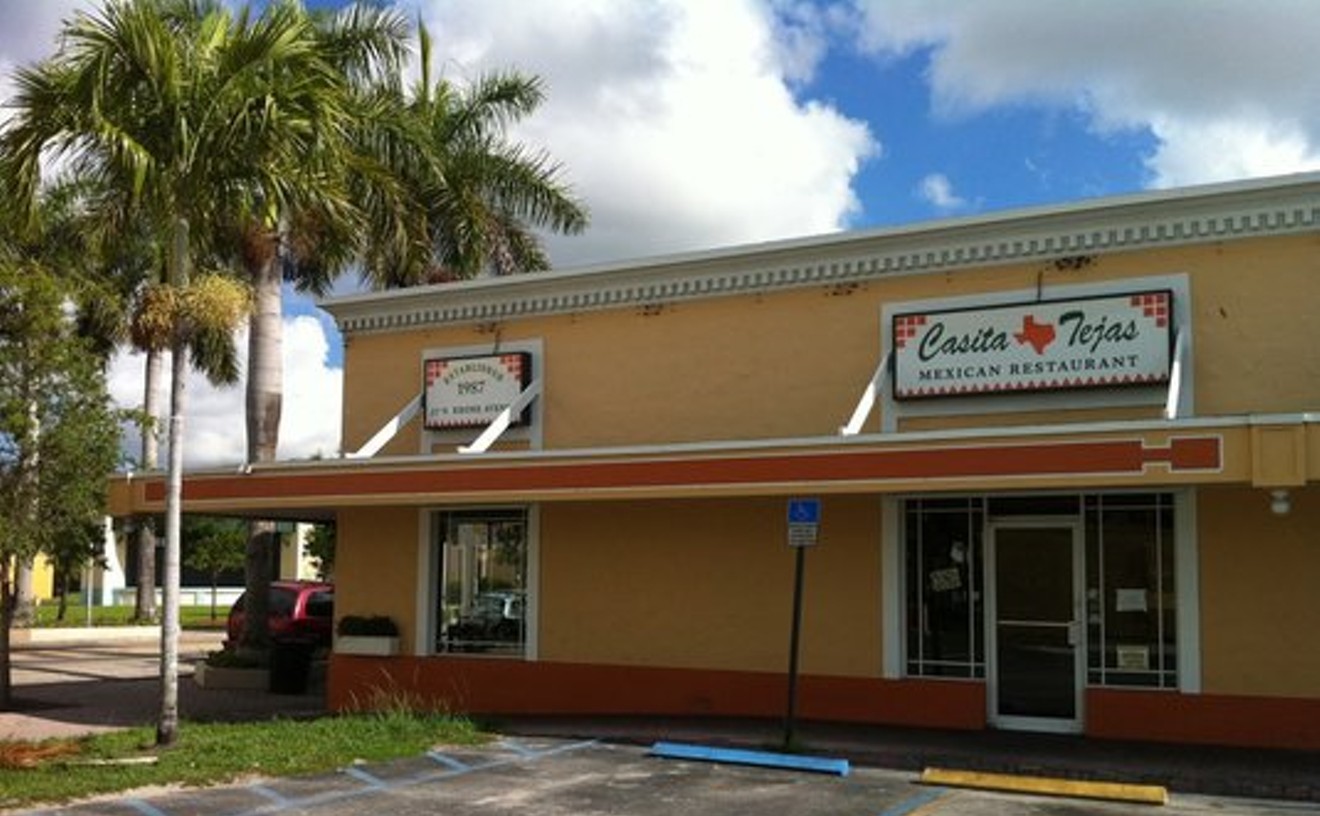 Tacos are simple concoctions, usually containing only three or four ingredients, so the little things -- a sprinkle of fresh cilantro, a squirt of lime juice -- can make a big difference. At Casita Tejas the difference is the meat. The chicken, ground beef, and pork tacos ($6.50 for any combination of three with rice and beans) all have well-marinated, good-quality meat, and the chefs at Casita Tejas take care not to overcook. But the steak tacos ($7.50 for three with rice and beans) are the reason to eat at Casita Tejas. Perfectly cooked flank steak slices -- not the dried-out shards of meat you find at so many taco stands and restaurants -- are marinated for twelve hours, though Casita Tejas manager Veronica Corona won't divulge the ingredients in the secret marinade. The restaurant has been a staple on Krome Avenue for fifteen years. The sunny interior looks out, via wall-length windows, onto Homestead's main drag (for what it's worth). Corona isn't troubled by the view across a parking lot at rival restaurant El Toro Taco (the 2002 New Times Best Taco winner). "We've been here so long," she shrugs, "people know us and we're constantly busy."

Sit in a booth, or sidle up to the counter and enjoy a massive repast with any and all combinations of the breakfast staples that make you want to go right back to bed: ham, bacon, sausage, waffles, pancakes, eggs, biscuits, gravy, grits. Chuck Wagon breakfasts provide the caloric intake you would need for ploughing your fields or rounding up cattle (rather than sitting at your terminal, wondering if co-workers can hear your stomach gurgle through the cubicle walls). Breakfast is available all day, and specials last from 6:00 to 10:00 a.m. Daily specials include a two eggs, grits, and bacon breakfast for $2, and omelet and breakfast combos that change every day, but hover around the $4-$5 price range.

Why are Miami Subs' fries so addictive? First of all, they're more visually appealing than the pale-yellow "freedom" fries dished up at other fast-food joints. Miami Subs cooks its fries until they're a golden, resonant brown. That means they're always crunchy and never underdone like those of so many competitors. But the real attraction, the reason you can't help coming back repeatedly for these rail-thin spuds, is the secret seasoning that imparts a memorable yet mysterious flavor -- a little spicy, a little exotic. Miami Subs honchos will not divulge the precise recipe, and that's fine. Who wants to try this at home anyway?

Photo by Lynn Parks
There's nothing more romantic than a picnic, right? A blanket spread in a secluded seaside nook or beneath a flowering tree. A column of red ants marching across your blanket. Sand flying into your plastic wine glass. And those damn flowers falling into your tuna fish salad. Maybe a picnic's not so romantic after all. You want the greenery, the seclusion, the quiet without all the dirt and pests. And, let's face it, you want a repast that's a little more seductive than what you can cram into a Tupperware tub. So call Perricone's and make a reservation for one of the tables on the back patio. If you really want to get intimate, ask for the wicker chairs beneath the trellis. No one will see you but the waiter when he brings you delectable dishes -- on real dishes. When he's gone, all you'll hear is the whir of the ceiling fans and the sighs of your beloved.

BEST RESTAURANT WHEN SOMEONE ELSE IS PAYINGWhen it comes to subjects of fine-dining debates, La Broche has been a veritable gastronomic epicenter. Just voicing the name of this controversial restaurant is enough to launch earthquakes of opinions, accompanied by tidal waves of whetted appetites and burning fires of curiosity. Indeed the fare that executive chef Angel Palacios prepares at this offshoot of the two-Michelin-star original in Spain can be called nothing less than incredibly avant-garde, highlighted by an array of foams, gelatins, and interesting if not always appetizing parts of animals. When all is said and done -- or eaten, rather -- La Broche isn't any more expensive than the usual prime suspects around town. But when it comes right down to the pork turbot in pea sauce garnished with sea urchin and "empanadas" of trout egg or basil-gelatin lollipops encasing tomatoes and watermelon, which you may or may not find truly exhilarating, you just might be relieved by the saving grace: "At least I didn't have to pay for it."

Hang out in Tokyo after working hours and you're likely to see hordes of men in suits, knocking back shots of sake or bottles of beer and feasting on sushi and yakitori at loud tavern-style eateries known as izakayas. Hang out in Coral Gables at the almost-hidden Japanese restaurant Su-Shin Izakaya and you're likely to behold the same sight. Of course those businessmen have wandered in from the hotel across the street, yet they seem right at home. What contributes to that feeling? The artfully wrapped rolls filled with the freshest slices of fish such as tuna, salmon, or yellowtail; daily specials such as maguro youke (lean chopped tuna topped with shiso leaves and served in a frosted glass bowl); and the most delicate sashimi. Makes you want to raise your glass and say "kampai!" too.