Blink and you'll drive past this quaint barbershop tucked away in a dingy strip mall on the northern edge of the City of Progress. Want to take the pulse of Miami-Dade's second largest municipality? Plop down on one of the three red-vinyl barbers' chairs, grab a macho car magazine, and engage owner Manuel Perez in conversation. The tonsorial artist will boisterously complain about local politicians, critique a new restaurant, and tell tall tales of his latest fishing expedition. While he is snipping and clipping, a cast of local characters ranging from the neighborhood drunk to the beat cop will walk in to greet the middle-age barber, who sports a full head of salt-and-pepper locks. Spend a little time and you'll get not only the scoop, but a good cut for a measly $12. And Manny will even shave those pesky hairs from the back of your neck.

Best Chatter at a Cafetería Window

"If you could call this place something, it would be tantamount, in Spanish, to that sitcom in English where everybody knows your name -- Cheers," says Miami-Dade Fire Rescue's Lt. Eddie Ballester. The firefighter and paramedic, stationed five blocks away, is a regular at this window. Over the years Brothers to the Rescue leader José Basulto has scarfed not a few pastelitos at this locale while pondering his next move. Miami-Dade County Manager Merrett Stierheim also has been spotted here, along with several of his assistants. Univision's answer to Walter Cronkite, newsman Guillermo Benitez, is another familiar face. Policemen, businessmen, plumbers, retirees, and Harley-Davidson aficionados all make this their chitchat haven. On a recent Saturday, while waiting for his coffee and Danish, Ballester talked about saving lives with Retavase, a new clot-busting medication for heart-attack victims currently being tested at his station. You never know what new things you'll learn at the Universidad de la Carreta.

Best Chatter at a Cafetería Window

"If you could call this place something, it would be tantamount, in Spanish, to that sitcom in English where everybody knows your name -- Cheers," says Miami-Dade Fire Rescue's Lt. Eddie Ballester. The firefighter and paramedic, stationed five blocks away, is a regular at this window. Over the years Brothers to the Rescue leader José Basulto has scarfed not a few pastelitos at this locale while pondering his next move. Miami-Dade County Manager Merrett Stierheim also has been spotted here, along with several of his assistants. Univision's answer to Walter Cronkite, newsman Guillermo Benitez, is another familiar face. Policemen, businessmen, plumbers, retirees, and Harley-Davidson aficionados all make this their chitchat haven. On a recent Saturday, while waiting for his coffee and Danish, Ballester talked about saving lives with Retavase, a new clot-busting medication for heart-attack victims currently being tested at his station. You never know what new things you'll learn at the Universidad de la Carreta. 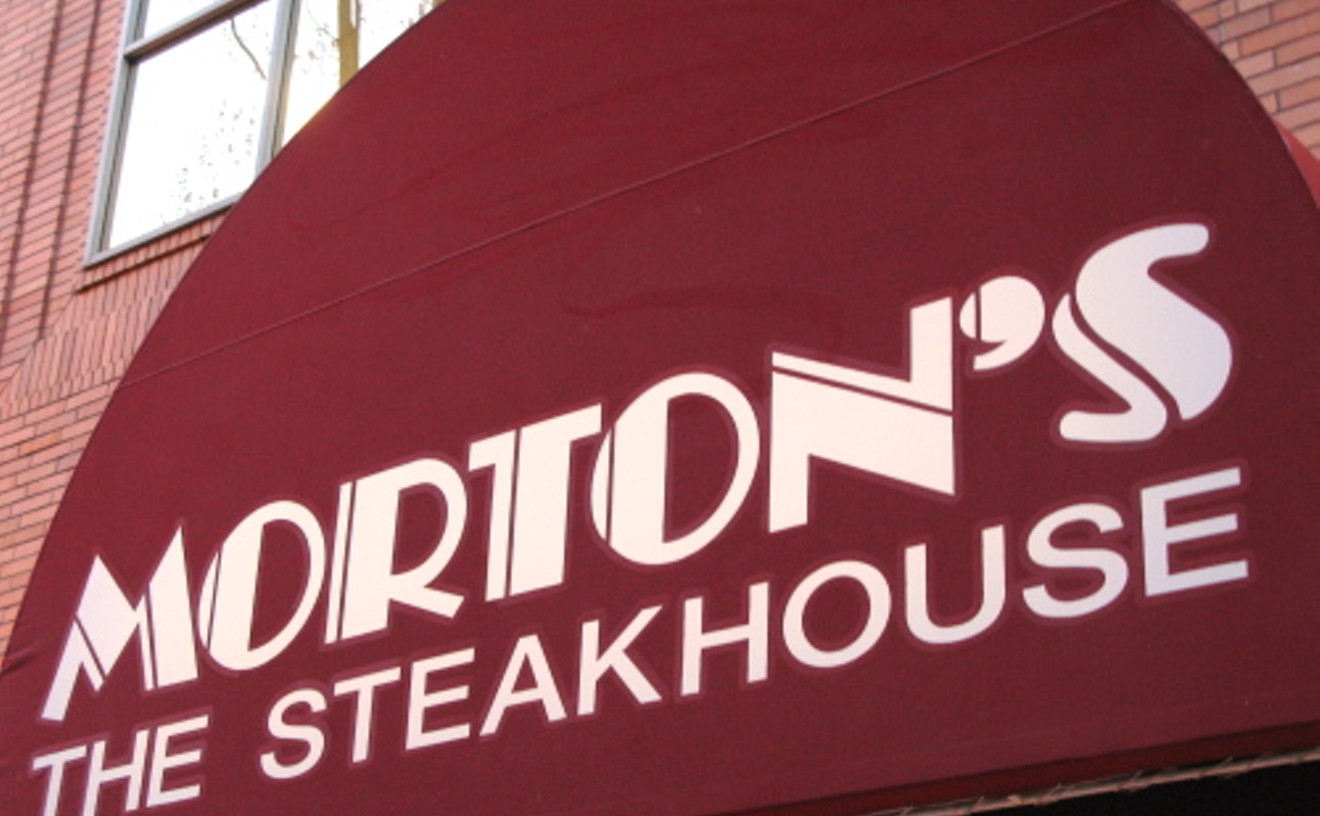 Oh, we know the myth. The best hamburgers are made from ground chuck, because the meat has more fat in it. The fat then prevents the burger from shrinking into a McDonald's-esque disk while cooking. Well, baloney. At the downtown location of Morton's, the hamburger is a full eight ounces of lean ground sirloin. Hard to feel guilty eating that. And it's just about the juiciest thing we've encountered outside the Chris Paciello story. The single drawback? The burger is served only during the noontime meal. Still, order with a side of lyonnaise taters, and that's what we call a power lunch.

If quality time at your house feels more like Mortal Combat, it's time to drag the kids to family tae kwon do class with ninth-degree black belt grand master Joong Keun Suh. Head coach of the U.S. Olympic team during the first half of the 1990s, Suh and his son, master Jay, give new meaning to the old adage "father knows best." As the white-robed parents that pack this Kendall studio know, there's nothing like a roundhouse to the chest to teach tykes to respect their elders. But watch out, Mom and Dad, the grand master has trained his share of black belts under age six. By bringing out the best in young and old alike, grand master Suh helps his students to fully comprehend the ancient Korean maxim: The family that kicks together, sticks together.

There was much trepidation about the coming of this monster movie theater to our much-treasured Road. Would this cold and corporate megaplex shoveling out Hollywood hits put an end to any remaining pretense of funkiness that the mall had? Surprise: The Regal on South Beach has fit in more snug than many thought. First, it lived up to its promise to show alternative movies. At least two screens per week show foreign or gay-theme films, or films that otherwise might not have unspooled here. Second, the theaters themselves are comfortable: medium-size rooms, plush seats, and good views from every one of them (so often not the case at a megaplex). Parking hasn't been a problem, either; in fact you can often find a spot right on Alton Road, just a block away. There is a good selection of food, a café, even an outdoor patio and balcony, and absolutely no loud video arcade anywhere on the premises. Finally, before or after the movie you can stroll down the street that, while it has lost much of its counterculture vibe, remains Miami-Dade's most people-friendly urban area.

At the dawn of a new millennium, New Times and a host of South Florida's most forward-thinking citizens have taken on a weighty responsibility: to predict the future. And it doesn't look pretty to us. The stock market will sag, dot.com technology will leave us in the slow lane, and Miami Mayor Joe Carollo will explode, showering the city with post-Elian scum and bile.

So we've decided to concentrate on what's fresh, pretty, and sweet. Actually we're kind of fresh, so let's move on to the other two. We asked a well-known chef, the leader of the county's most successful human-rights campaign, a prestigious architect, and the winner of a genius grant, among others, to tell us what Miami-Dade will look like 100 years hence. Their answers, we hope, will spur you to think a little, dream a bit, and laugh a lot.

And if that's not enough, we've scoured the county for the best hip-hop barbershop, the top topless beach, and the most appropriate restaurant for intimate conversation (think mattresses on this one). We've also dug up a mall kiosk that would have embarrassed Sigmund Freud, a local pop band that would have shamed Jack Kerouac, and an unguarded moment that clearly humiliated school spokes-nerd Henry Fraind. Indeed we have chosen more than 400 of the best things going.

Hundreds of you wrote and e-mailed us with ideas for the readers' poll and some of your ideas were downright creative. Some were weird, too. A few of you had a crush on voluble historian Paul George. Others wanted us to choose the number-one yoga teacher and laser hair-removal center. Sorry folks, maybe next year. Others stuffed the ballot box. We disqualified those votes.

But enough about yesterday. Read on. Think ahead. Enjoy.

Best Place To Drink And Watch The News Go By

The bar at the Capital Grille

This darkly hued downtown oasis is ideal for checking your investments while you quaff some refreshments. Sure it's a national chain with a gimmick: a news ticker. But at least it's an informative gimmick. Sit in air-conditioned elegance while the headlines and stock market updates whiz by on the wall. Somehow it's more exciting than watching television over the massive wooden bar. Steeped in sophistication the Capital Grille bar is cigar-friendly and aurally agreeable: A piano player jams nearby from Tuesday through Saturday. There is no happy hour to attract the boisterous riffraff, though you may get to observe how your neighbor at the bar reacts when he loses his shorts on those technology stocks.

A South Florida native who rocks, singer/songwriter DeNisco has been playing guitar since childhood and performing professionally for thirteen years. Now living in Dania Beach, she's a regular on Miami-Dade stages. Riding the wake of her first CD, 1995's On My Way (which garnered two Billboard songwriting awards for the ditties "I Belong with You" and "Mystic Tune"), she's now pushing her latest release, Winds of a Dream. A six-song disc she simply calls "pop-orientated acoustic rock," it's a perfect platform for her to showcase a clear, touching, sometimes raspy voice. You can catch DeNisco performing in local clubs about four times a week. Sometimes it's just her and a guitar. Other times she's with her full band. No matter who she's with, you won't be able to resist the rock or the voice.

This converted no-tell motel on South Dixie is painted a really disgusting shade of green; a more reliable harbinger of the food within can be seen in the clusters of patrons on the benches outside the front door, eagerly awaiting their tables. Inside it's long and narrow, with a boxcarlike feel, but the friendly service and the pungent scent of Thai basil, fish sauce, and chili paste more than compensate for the cramped quarters. A Thai restaurant is only as good as its pad thai, and this one kills: a light hand with the ground pork, and it actually has plenty of shrimp! The rich curries are excellent, as are appetizers like tiger tear and nam sod. The chefs also show a deft touch with seafood; if you find a restaurant of any ethnic description that can cook up a tastier whole snapper, let us know. And if you like your Thai food with plenty of fire, you'll be pleased to know Siam Lotus Room actually takes you at your word when you ask for "four stars" of spiciness. Ouch! Hurts so good.