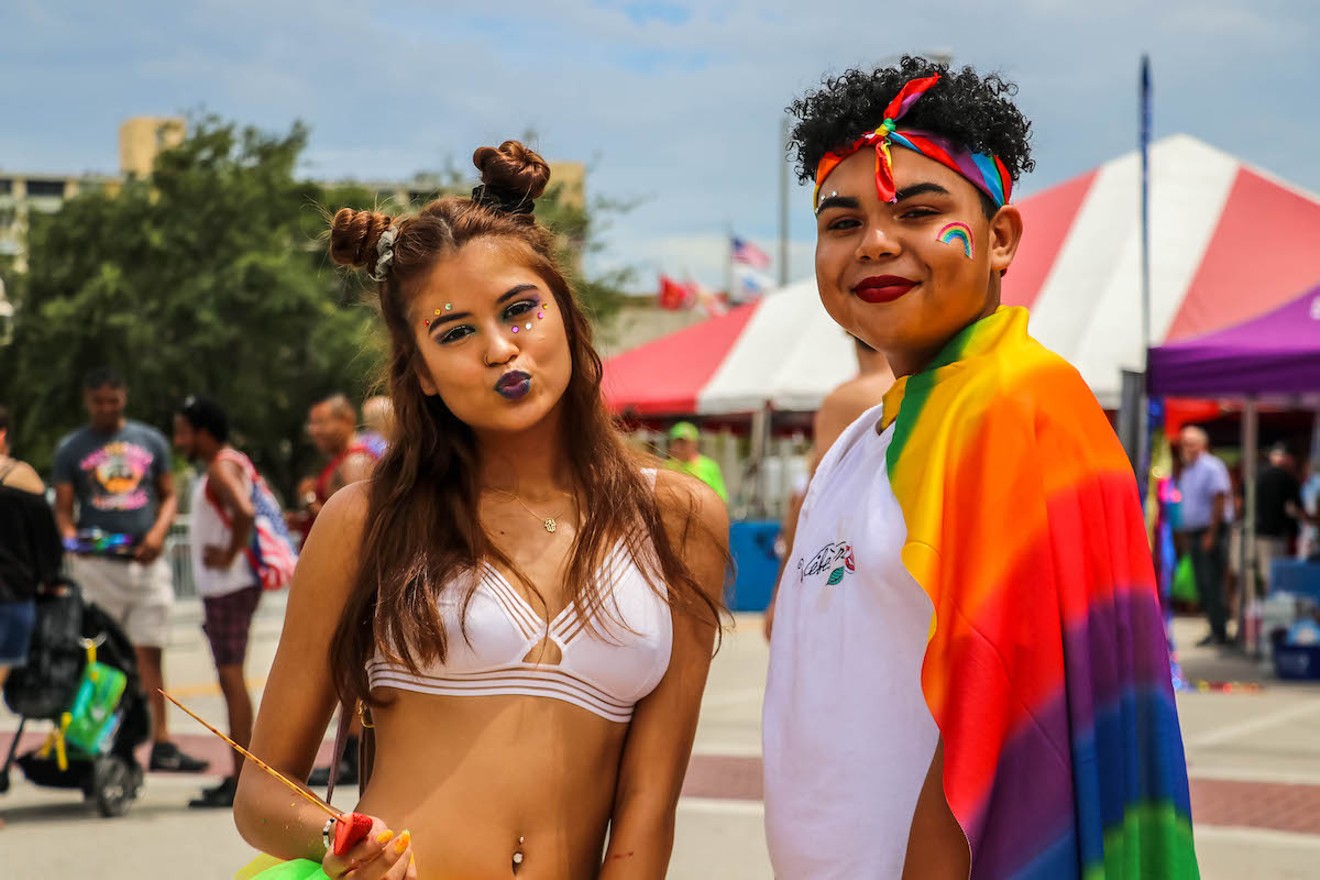 Yes, it's more than glitter and fans, and here's its story.

Stonewall Pride is set to deck out Wilton Drive on Saturday, June 18. Hosted by the Wilton Manors Entertainment Group, a partnership among the City of Wilton Manors, Hotspots, Happening Out, and the Wilton Manors Development Alliance, This year's festivities will bring more stages across the festival, representing various groups in the LGBTQ+ community and significantly increasing the size of the event compared to years past.

Stonewall Pride started in 1999, when the City of Wilton Manors joined with a production company to hold an event in the city. Before the decision to pay homage exclusively to "the Island City," it was a part of Pride Fort Lauderdale.

Naming the event was a no-brainer, says event manager Jameer Baptiste, who signed on to run the festival three years ago. Stonewall Pride was chosen to commemorate the Stonewall riots of 1969.

"Everything that was built for our pride celebrations was built off of that moment, and Stonewall had a significant impact. It is the name that lives on for that moment," Baptiste says.

In the early summer of 1969, patrons of the Stonewall Inn, a well-known gay bar in New York City's Greenwich Village, staged a series of riots in protest against local law enforcement's discrimination and abusive conduct. The uprising became a cultural phenomenon widely recognized as the start of the gay liberation movement.

Stonewall Pride's early years did things in the usual South Florida fashion: selling the event to the highest bidder. Independent production houses ran most of the parades, sometimes collaborating to produce them. According to Baptiste, the city would take the bids and choose which entities were best suited to represent Pride.

Wilton Manors' first Stonewall Pride parade took place in 1999.
Photo courtesy of Stonewall Pride
Over the years, there have been many versions and takes on Stonewall Pride, but one thing has remained consistent: It has always taken place on Wilton Drive. The street was chosen because of the significance it holds for local residents. Baptiste tells New Times the story a gay resident shared with him about being closeted and passing Wilton Drive, seeing a sign for a store named Gay Mart, and promising himself that one day he would "belong there."

As the gay liberation movement has evolved, so has Stonewall Pride. Baptiste says that not only will there be a stage dedicated to LGBTQ+ women this year, but there are also plans to have a transgender stage for next year's Pride. Last year, the inclusion efforts featured a Black Excellence stage to commemorate Juneteenth.

Representing members of the community who are under attack has become a crucial mission for Baptiste.

As anti-trans, "Don't Say Gay," and anti-CRT legislation percolate across the nation, this year's Stonewall Pride will celebrate past victories and prepare for the fights that lie ahead.

"It's a celebration to commemorate the struggles and triumphs of our gay brothers and sisters that have truly helped us to get to this point. Just the name alone is synonymous with struggle," Baptiste explains.

Stonewall Pride has also become a major event for local politicians to show their support for the LGBTQ+ community. Amid the floats and flags will be members of the city council of Wilton Manors, Wilton Manors Mayor Scott Newton, and Rep. Debbie Wasserman Schultz. In a city of 12,000, that's a powerful statement. 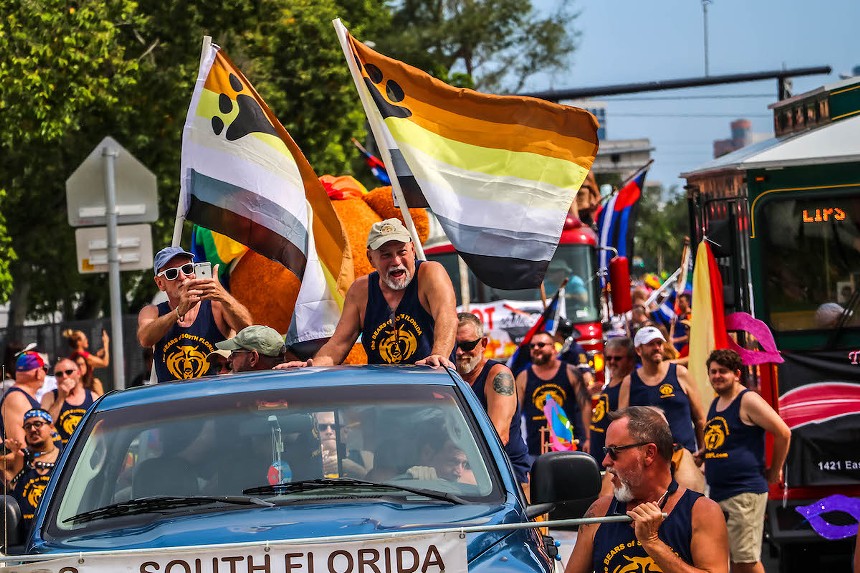 Stonewall Pride is making an effort to represent all elements of the LGBTQ+ community.
Photo courtesy of Stonewall Pride
"Our Stonewall Pride Parade and Street Festival celebrates the importance of acceptance and Pride that makes up the fabric of our community. We are excited to bring this event back once again to our city and invite everyone from near and far to come out and celebrate Pride with us," Newton said in a press release.

Wasserman Schultz was one of the people who were nearby at the start of last year's festival when a truck that was leading the parade accelerated unexpectedly, striking three participants and killing one of them. The victims and the driver were all members of the Fort Lauderdale Gay Men's Chorus; an investigation determined that despite initial rumors to the contrary, the collision was an accident.

In a sense, last year's tragedy is a metaphor for the Stonewall Pride Parade and Festival itself — a story of struggle and perseverance, all while courageously pushing the envelope for communities that, as Baptiste notes, continue to be underrepresented, even at Pride.

"When you look at Pride, you see so many men flocking to these locations and so many ads appealing to men. It's nice to have a place where women feel accepted and can belong," says Baptiste, discussing the decision to include a women's stage this time around.

In many ways, Stonewall Pride's trajectory mirrors that of Pride's larger story. The inclusion of women, trans, and nonbinary people, and people of color in the face of national conflicts such as the overturning of Roe v. Wade, anti-trans laws, and police brutality, brings to mind an old gay battle cry: "We're here! We're queer! Get used to it."

Stonewall Pride Parade & Street Festival. 3 to 11 p.m. Saturday, June 18, at Wilton Drive between NE 20th and 26th streets, Wilton Manors; stonewallpride.lgbt. Tickets cost $7 to $10.
KEEP MIAMI NEW TIMES FREE... Since we started Miami New Times, it has been defined as the free, independent voice of Miami, and we'd like to keep it that way. With local media under siege, it's more important than ever for us to rally support behind funding our local journalism. You can help by participating in our "I Support" program, allowing us to keep offering readers access to our incisive coverage of local news, food and culture with no paywalls.
Make a one-time donation today for as little as $1.