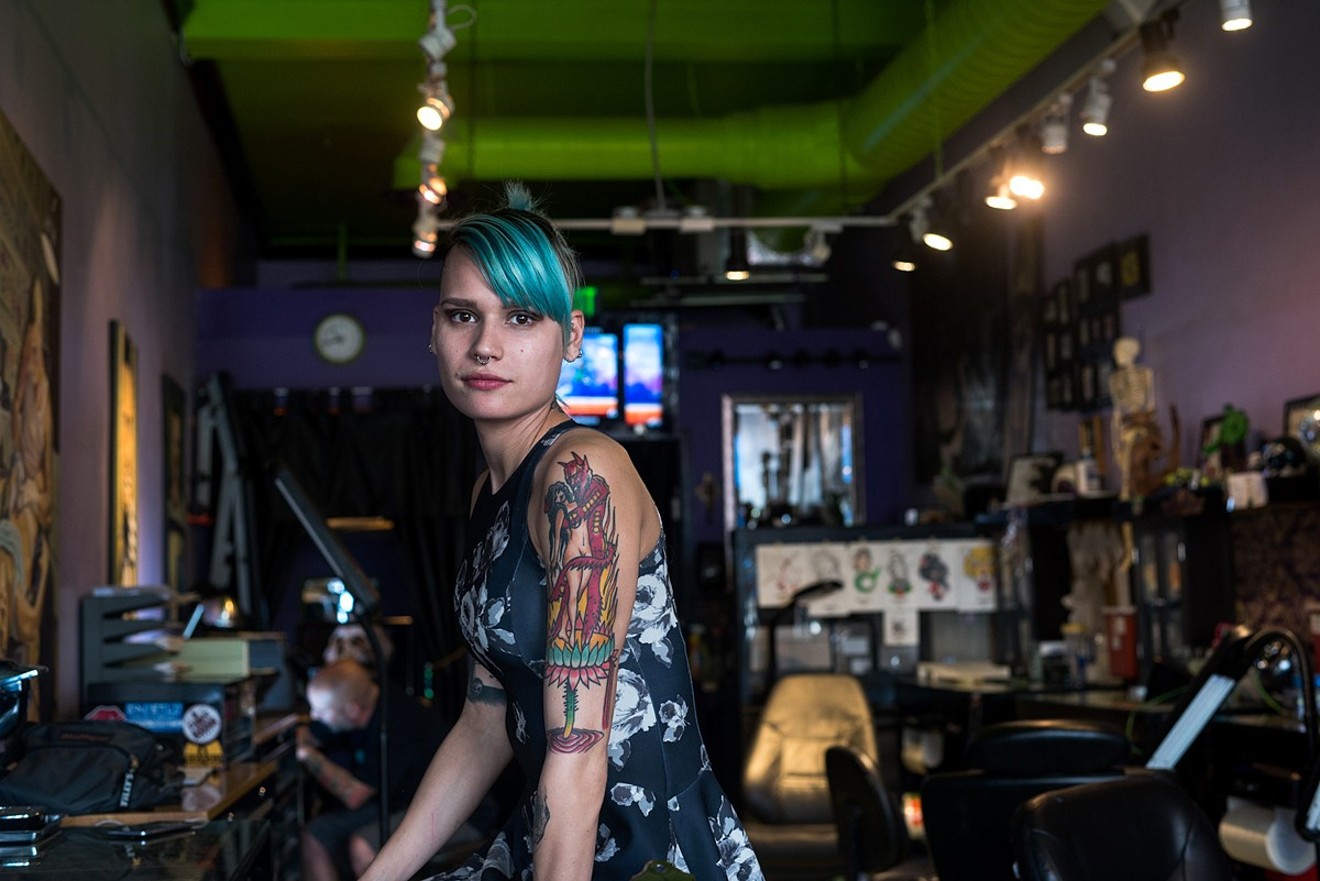 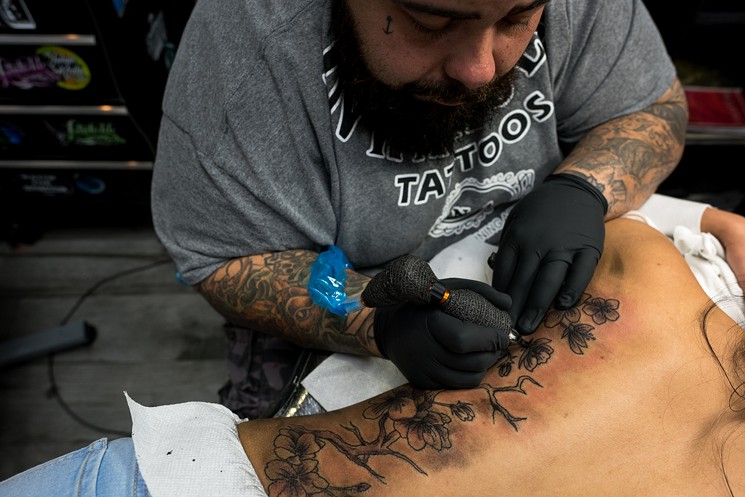 Inkaholik
Photo by Karli Evans
6. Inkaholik. Owned by the mysterious Mr. Columbia, Inkaholik takes a high-volume approach to its two locations in Southwest Miami-Dade. Founded in 2007, the shops are known as much for their mastery of various tattoo styles as for their groundbreaking business model. Inkaholik employs more than 22 artists and regularly advertises tattoo “flash sales” and price specials. Gabe, the manager of the Bird Road location, describes their business strategy as “groundbreaking” and insists Inkaholik has “more tattoo artists per square foot than any other shop in the state of Florida.” But lest you think Inkaholik is simply series of veal pens filled with overworked tattoo artists, the two shops are also top spots in Miami-Dade for piercings. 8367 Bird Rd, Miami; 305-392-0966; inkaholiktattoos.com. 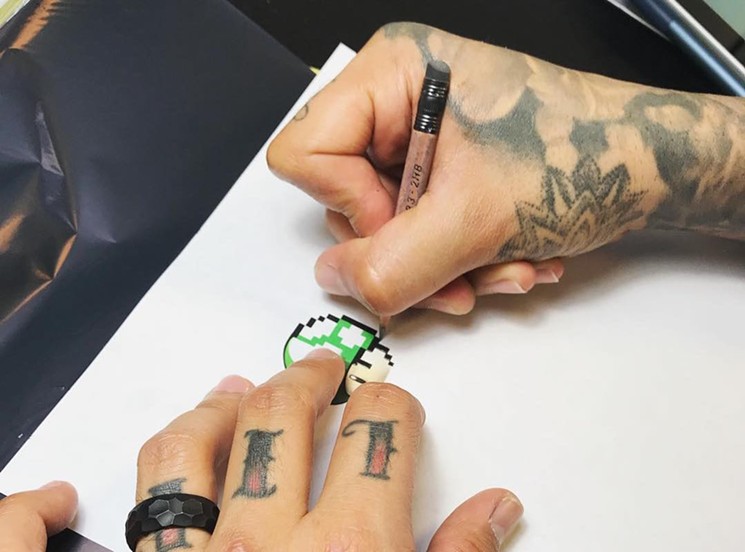 Courtesy of Abstracto Studios / Facebook
7. Abstracto Studios. For anyone in South Miami-Dade looking at this list and wishing there were someplace closer to home that made the cut, Abstracto Studios is the one. Even if you aren’t located near William Quiceno’s shop in Cutler Bay, it would be worth your while to make the drive if you’re into anime or videogames. Quiceno specializes in bringing your favorite characters to life on your body, and his work is unreal. Whether you’re looking for a Dragon Ball Z tattoo of your favorite Saiyan prince and his archenemy Kakarot; a piece with Pikachu, Ash, and the rest of the gang to show how much you want to catch 'em all; or just a little Super Mario mushroom to give you that boost you need, Quiceno’s color work and shading will have people thinking your tat was lifted straight from the source material. What’s more, the atmosphere is tailor-made for anime fans and gamers, with statues and posters throughout the shop and a couch in front of a big-screen where you can play Xbox One or PS4 games while you wait. There’s even a gaming setup near Quiceno’s table for you to play during your session if you’ll be there for a while and want to take your mind off the needle. Need more proof of Quiceno's bonafides? He works with Major League Gaming and tattoos professional gamers in Call of Duty, Overwatch, and Gears of War leagues. And if you’re not looking for anime- or game-inspired ink, don’t fret: Quiceno’s talents go well beyond the niche he’s carved out for himself. Rest assured, you won't be disappointed. 18901 SW 106th Ave., Suite 213, Cutler Bay; 786-250-3343; abstractostudios.com.

27 Miami Tattoo Shop
Photo by Karli Evans
8. 27 Miami Tattoo Shop. Full disclosure: Argentine owner Fernando Zicarelli and I have ink from the same Buenos Aires tattoo artist, El Chino, so it’s a sure thing he has great taste. 27 Miami Tattoo shop is another small one-man operation run by a great artist. Zicarelli does incredible work in just about any modern or geometric style. His lines are so clean they pop. His blacks hold the light. His colors catch the eye. This is the guy to see if you have a vision for a sleeve or a big back piece. He’s going to listen closely, and he’s going to produce incredible results. 1697 NW 27th Ave., Miami; 786-262-9713; 27miamitattooshop.business.site.

Green Machine Tattoo Shop
Photo by Karli Evans
9. Green Machine Tattoo Shop. Don’t let the vermilion interior put you off. Green Machine, a small Southwest Miami-Dade shop run by owner Chris Rossi, has attracted a loyal following from its humble storefront on the corner of Bird and Ludlam Roads. This traditional tattoo shop offers a friendly atmosphere, excellent Japanese-style tattoos, and realistic portraiture. Interior decor notwithstanding, Green Machine is where you go to make a personal connection with your tattoo artist and where you can get a great tattoo done for a decent price by a guy you will probably run into at the local bar. 6570 SW 40th St., Miami; 786-619-8760; facebook.com/greenmachinetattoos. 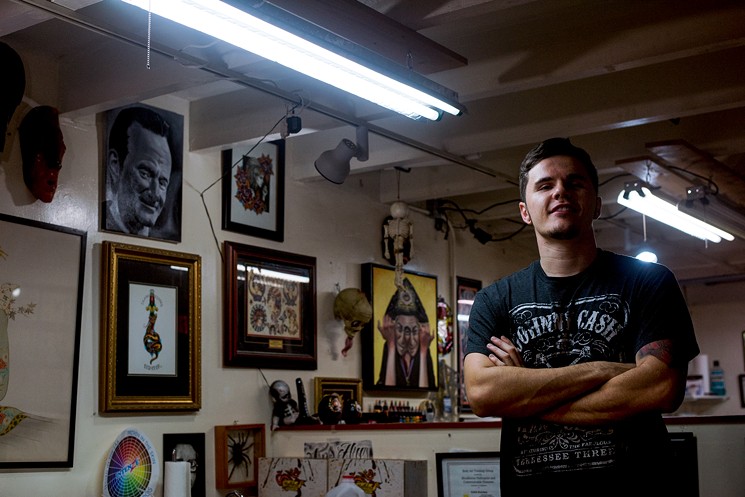 Babylon Tattoo
Photo by Karli Evans
10. Babylon Tattoo. Well worth the drive north, Babylon Tattoo is one of Broward's best tattoo shops. This is a medium-sized shop that does solid work in all styles, but artists Novi Filipovich and Keith Zahra really stand out for their distinctive aesthetics. Filipovich’s cubist-inspired works look like the kind of tats Picasso or Braque might have gotten if anyone had owned a tattoo gun in fin de siècle Montmartre, and Zahra’s mandala-inspired tattoos are absolutely mesmerizing. 831B N. Federal Hwy., Fort Lauderdale; 954-523-3088; babylontattooshop.com.