Isabelle Huppert on Barry Jenkins and Showing Her Comic Side

Isabelle Huppert in Souvenir. Strand Releasing
On March 16, Miami Film Festival will honor one of the most talented actresses in modern cinema. The night will reflect on an extensive career that spans more than a hundred films, highlight one of her latest leading roles, and finish with a tribute on the stage of the Olympia Theater. This performer is Isabelle Huppert.

You might know her from Heaven’s Gate, The Trout, The Piano Teacher, La Cérémonie, I Heart Huckabees, and Elle. She's the most nominated actor in France's César Awards history (and has won twice). Over the past five decades, Huppert's performances have swept audiences away.

But even legends have heroes. For Huppert, it's Shirley MacLaine.

“She’s one of the greatest actresses ever for me. She’s not like anyone else,” Huppert explains when asked why she cited the actress’ performance in Some Came Running as her favorite in a Hollywood Reporter roundtable discussion years ago. “She’s unique, dramatic, and funny — a complete actress for me. And in that film in particular, she really shows this. The range of being very naive and very deep at the same time, it’s amazing. It really is something I enjoy watching over and over.”

Fans who've followed Huppert's career might see her fascination with a complex female performance reflected in the complex women she embodies onscreen. But Huppert doesn't view her characters the same way viewers might.

“I don’t see them as complex women, and I’m not sure I’m attracted to these women as complex but rather as reacting to and reflecting on the complex realities which they are plunged into. I see them, most of the time, more like survivors trying to fight a certain amount of complexities. In themselves, they are not more complex than anyone else; they just have to face complex situations.” 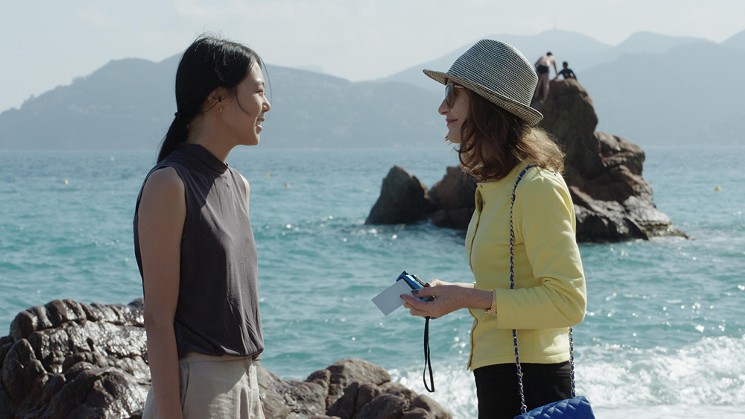 Kim Min-hee and Isabelle Huppert in Claire's Camera.
The Cinema Guild
Take, for example, Huppert's roles in Michael Haneke’s The Piano Teacher and Francois Ozon’s 8 Femmes. “They are each at the extremes of range that an actress can cover,” Huppert says, laughing. Most people assume she’s an overly serious artist, she says, because they see her as a dramatic actor first and foremost.

“I don’t like to draw any definitive line between dramatic work and comic work. There’s always a moment when it comes to cross and where comedy and drama are rendered in the same role,” she explains. “In comedies, you have some kind of drama, and in dramas, you have comedy.

“People know me for very dramatic work like The Piano Teacher, but if you look carefully in my last works, like Elle or even Things to Come, two French films that a lot of American people saw, it’s dramatic, but it’s not only dramatic. There’s always an angle where there’s a lot of humor and irony and levity.”

Souvenir, the film that will be shown at Huppert’s tribute event, where she’ll be awarded a Precious Gem Icon Award by Miami Film Festival, is one such instance in which drama and levity meld. She enthusiastically agrees when director Bavo Defurne’s work is compared to Douglas Sirk's, noting the film works “halfway between realism and something with a lot of creativity and imagination that’s very cinematographic.”

Her other film screening at the festival, Claire’s Camera, was shot at the Cannes Film Festival. “Hong Sang-soo is a master for me,” she explains when asked about the director, with whom she had collaborated previously on In Another Country.

At the suggestion of making a film while she's in Miami, perhaps with Moonlight director Barry Jenkins, Huppert is amused. "We would love to work together," she notes, an unsurprising statement in light of their mutual love expressed on social media. "So that might be a possibility someday."

Isabelle Huppert and Barry Jenkins
Christopher Polk/Getty Images
Her pleasure and interest in Miami extends to the double feature the festival will offer audiences. She's "happy that both of these movies were picked for the festival because they go together well,” she says.

“Souvenir is to be taken like a charming fairy tale, but there are deeper themes running through the film. And in Claire’s Camera, I’m almost like a fairy woman, you know? My little camera is almost like a magic thing. It is a great little film about moviemaking, and my character is a director in a way. I make people meet, and I make people sing their truth to one another.”

When it comes to directing her onscreen though, Huppert admits she doesn’t need much verbal instruction from filmmakers. "There are other ways to be directed that aren’t necessarily verbal, and for me, that’s the best kind,” she says. "The camera movements and zooming of the lens, the staging and framing — that’s the kind of direction that really makes an indication of how you’re supposed to act.”

This kind of direction has not only facilitated some of her greatest performances but also enabled her to collaborate with filmmakers more than once. For instance, she has worked with Michael Haneke, Benoît Jacquot, and the late Claude Chabrol four, six, and seven times, respectively.

“It’s always a pleasant feeling to work with someone again. It’s a confirmation that the relationship was good and there’s interest from both you and the director,” she says. “The more you know someone, the easier it is to work with them. And not only do you get to repeat that experience, but it’s a way of saying, ‘Yes, I love you,’ twice, three times, four times, five times.”