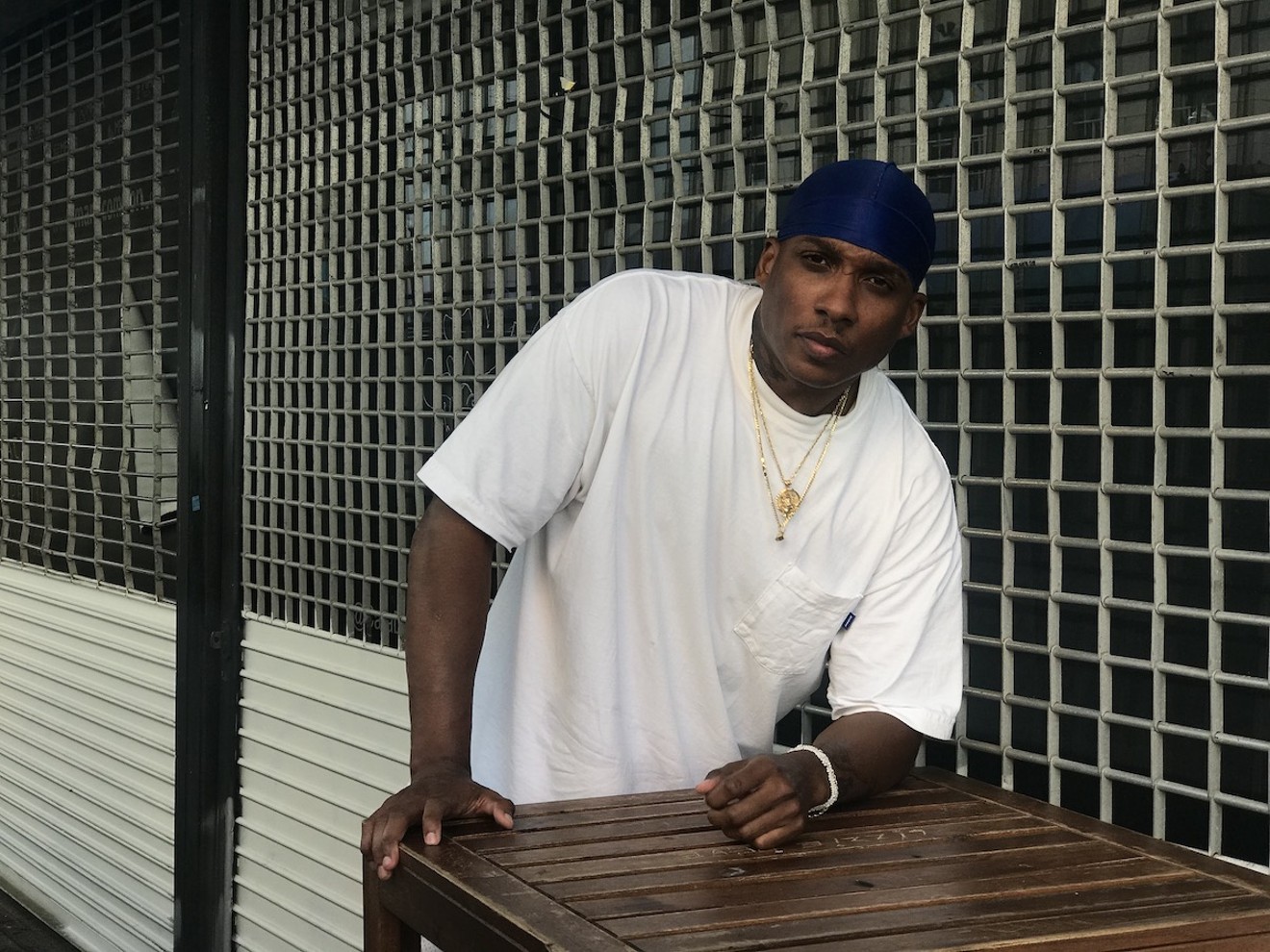 Fellahboy plays the character of Jamilio on Rap Sh!t. Photo by Jesse Fraga
In 2010, Fellahboy was skating home from his usual lunch at a Subway in Miami's Edgewater neighborhood when shrieks of laughter and applause caught his attention.

The then 20-year-old noticed the commotion surrounding a performance by the Front Yard Theatre Collective, a local improv theater group that would eventually train him for his debut television role on Issa Rae's new comedy series, Rap Sh!t. The HBO Max show follows two Miami women, Mia and Shawna, on their journey to rap superstardom.

Fellah, now 32 years old, appears in the first three episodes as Jamilio, an artist manager whose character isn't much different from his role as a rapper in real life.

"I'm from the streets, so the reality is that I wouldn't be who I am, and neither would my music if it wasn't for the things I went through," he says. "A lot of my past is not something I'm necessarily proud of, but it makes me who I am. I'm not running from it."

For the Liberty City native, his unexpected encounter with Front Yard led to the acquisition of new skills that helped sharpen his rap and newly discovered talent as an improv actor.

"It was simple: I created these amazing metaphors and similes, and I could ride the beat. That's what it's all about," Fellah explains.

"He came in on his skateboard, sandwich in hand, got on our stage, and blew us away," Sanchez recalls. "His original music was intense, compelling, smart, and catchy. Fellah always brought an element of social commentary and history in all his performances."

Front Yard was the only place he could authentically express himself. Growing up poor in Miami's inner city, Fellah's life was mostly about survival.

"Geographically, if you look at these neighborhoods, they're not for the weak," Fellah emphasizes. "There was a lot of aggression in the inner city, so even looking at somebody for a split second could cause a fight."

By the fourth grade, he would learn fighting was inevitable.

"Frank and two of his homeboys waited outside my classroom for two hours one day, all because his girl liked me," Fellah recalls, shaking his head. "I was in class scared as a motherfucker, where even my teacher was like, 'I don't know how to save you.' I did not go to schools where you could not fight."

By 2019, Fellah became entangled with "very serious crime," he tells New Times, declining to provide more detail. With charges on his back, Fellah realized his roots in music and fashion could help set him apart.
He hopes to share the beauties and tragedies of his life in an upcoming mixtape titled Fellahtalk, expected to drop within the next few months. Fellahboy also started the streetwear brand Talk, named after his Instagram Live series — also called Fellahtalk — where he discusses evolving personal experiences and ideas.

"I had to turn my life's trials, tribulations, and tragedy into something profitable to survive," Fellah explains. "A lot of skaters and artists start these brands to sort of promote what they stand for because it's all about building that reputation."

Growing up, Fellah relied heavily on his uncle, Octavio Jahdeani, a fashion designer and founder of the clothing brand the House of Jahdeani, for stylistic approval.

"I had older people in my family telling me, 'Boy, take that shit off.' You had to look fresh, or else you got ranked on. People were going to clown you," Fellah adds. "He put me onto how things are supposed to look on your body, just watching him create things from scratch."

He also has been affiliated with local skatewear brand Andrew Downtown since 2017. Nick Katz, the owner of Lot 11 Skatepark and Andrew's cofounder, recommended Fellah for the gig on Rap Sh!t.

"He's a close friend of mine," Katz attests. "No one knows Miami like Fellahboy."

Fellah happens to be one of the few Miami natives on the cast. And while the show depicts the city's rap scene, Fellah believes it only captures a snippet of Miami's grim reality, one where artists merely compete against others rather than granting opportunities to each other.

"I think it may be accurate for some people, but really there ain't no rap scene in Miami, no rap industry, no community," Fellah argues. "The people who were successful [in Miami] in the past have either moved away or just aren't making room for the new kids."

He looks up to the thriving rap communities in cities like Atlanta, Texas, and New York City.

"They have very close-knit scenes like if you know somebody, they're going to make sure to put you in a room with whoever you need in order to move up," Fellah explains.

He hopes to one day embody that role of a confidant for his family and future generations of youth — something he feels he lacked growing up.

"I really am my own staunch advocate," Fellah says. "I want to rewrite my family's history, coming from poverty. If I have kids, they won't have to worry about that shit."
KEEP MIAMI NEW TIMES FREE... Since we started Miami New Times, it has been defined as the free, independent voice of Miami, and we'd like to keep it that way. With local media under siege, it's more important than ever for us to rally support behind funding our local journalism. You can help by participating in our "I Support" program, allowing us to keep offering readers access to our incisive coverage of local news, food and culture with no paywalls.
Make a one-time donation today for as little as $1.