One Minute Dreamscape (2016) by James Clar. Courtesy of Mana Contemporary
Any given night, a stroll through the streets of downtown Miami feels like a walk through a dystopian wasteland. Abandoned storefronts in forgotten buildings line dimly lit sidewalks; displaced bodies litter alleyways, their makeshift bedrooms haphazardly strewn under overhangs. It's not hard to imagine the area as the scene of a futuristic nightmare despite the best intentions of city officials and developers aiming to make downtown the next epicenter of luxury in Miami.

In reflecting on that paradox and downtown Miami's ominous scenery, Mana Contemporary will present "Flatland: A Journey of Many Dimensions." A group exhibition composed of artists in Mana BSMT's New Media program, "Flatland" will transform five downtown storefronts to depict five conceptual levels: Dissociation, Liminality, Other Worlds, Resurface, and Flatland. Marrying downtown's gritty, downtrodden backdrop with a futuristic vision of a new reality, the exhibit will guide viewers through each world, incorporating AR/VR elements and 3D projection mapping. The exhibition will by on display December 6 through 10.

Curated by Mana BSMT program director Grace Franck, "Flatland" is a culmination of various projects taken on by Mana BSMT resident artists, who are selected for the residency program based on their work incorporating new technologies into art-making. In curating "Flatland," Franck explores the tendency of many young artists to gravitate toward new media.

"I think ["Flatland"] is just the result of where we're going in the development of our human condition," Franck says. "We are incorporating technology into every aspect of our lives and this sort of art form is stemming from this result. Technology has been a central part of a lot of artists' upbringings. Technology is the way they've experienced emotion or aesthetics. So I think it's about the language of technology." 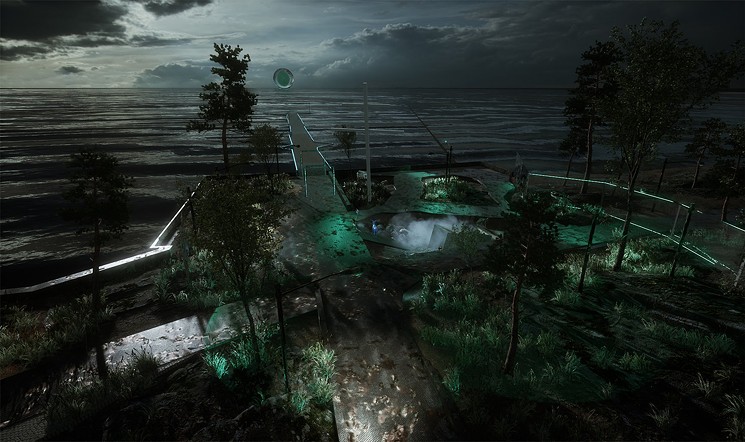 Jakob Steensen's Aquaphobia (2017).
Courtesy of Mana Contemporary
Technology may be the language of "Flatland," but the exhibition intends to bring this amorphous concept into a physical space and create a dialogue around shifting ideas of perceived reality. "What I want to evoke is this sense of being fully immersed and potentially exploring the idea of other dimensions," Franck says, noting that many of the 17 artists exhibiting in "Flatland" have traditionally restricted their work to the internet.

"They're all internet-based artists who started sharing their content on Tumblr and social media," Franck says. "With our BSMT residency, I've tried to hone them in on works they can manifest in a physical environment. In the majority of cases, this is still art that can be consumed on the internet, but I want this work to be experienced in a gallery."

Notable pieces to be exhibited in "Flatland" include Flesh Nest, a nine-channel video installation by Andrew Thomas Huang that's been reformatted as a three-channel project for the exhibit. "What I love about the work, in particular, is he shows all the layers that it takes to create these creatures in his videos," Franck says. "It's his way of suggesting that so many more dimensions of the world we live in."

Not coincidentally, Mana Contemporary's chairman, Moishe Mana, is the latest real-estate developers to have purchased a large swath of land in downtown Miami. Though the area's revitalization is surely imminent, it's a curious undertaking to present an exhibition that highlights the disjointed vision of what downtown Miami is and what it might be. Perhaps that's the point.