Emily Wardill's I Gave My Love a Cherry That Had No Stone (2016). Installation view at Biennale of Moving Images, Faena Park. Photo by Oriol Tarridas
Clad in his trademark all-white garb, with a matching bandanna and Panama hat, Alan Faena is the namesake of the city’s most upscale hotel, Faena Hotel Miami Beach. With his wife and close collaborator Ximena Caminos, he launched the Faena District to house the North American operations of Faena Art during Art Basel Miami Beach in December 2016. Their most recent project hosted the 15th Biennale of Moving Images, an “un-curated” exhibition comprising video, installation, and performance pieces.

Originally created for the Centre d’Art Contemporain Geneve, the show traveled from Switzerland to the sands of Miami Beach for a festive local debut. Of the 28 pieces in the show, seven were selected for venues at Faena Bazaar and Park. Located in vacant storefronts, unused garages, and courtyards, the pieces appropriate unconventional spaces for installations. The remaining batch of films will be shown at special screenings at the hotel and bazaar through the end of the month. All are free and open to the public. 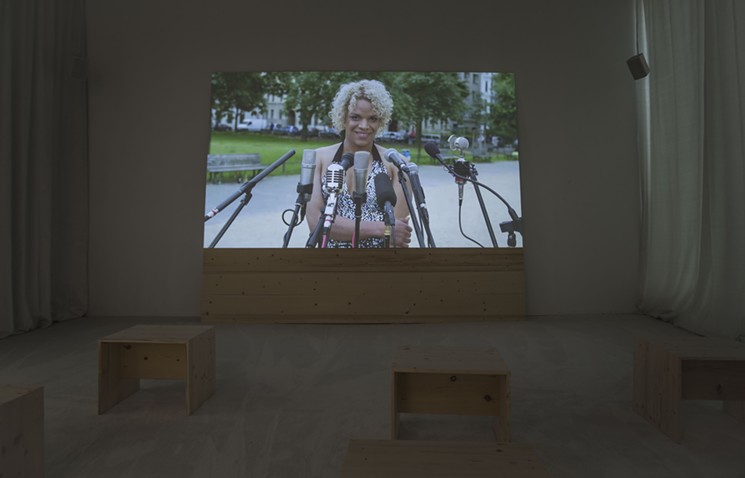 Pauline Boudry and Renate Lorenz's Silent (2016). Installation view at Biennale of Moving Images, Faena Bazaar.
Photo by Oriol Tarridas
“I like to say that we [Faena Art] are operate with an element of surprise, like Jenny Holzer does in the public domain,”,” Caminos quipped at the show’s opening, referencing the installation artist known for light projections and LED signs. “We like to to occupy unexpected places that provide new context for an artwork's message.”

Unlike most established festivals, the Biennale of Moving Images shows commissioned pieces produced with no specific curatorial theme. In Red Gold, Karimah Ashadu presents a short, experimental narrative about the economic and social context of palm oil production in Nigeria. For the British filmmaker, the piece is not only a meditation on her Nigerian roots but also both a celebration and an indictment of the country’s working-class values and political realties.
click to enlarge 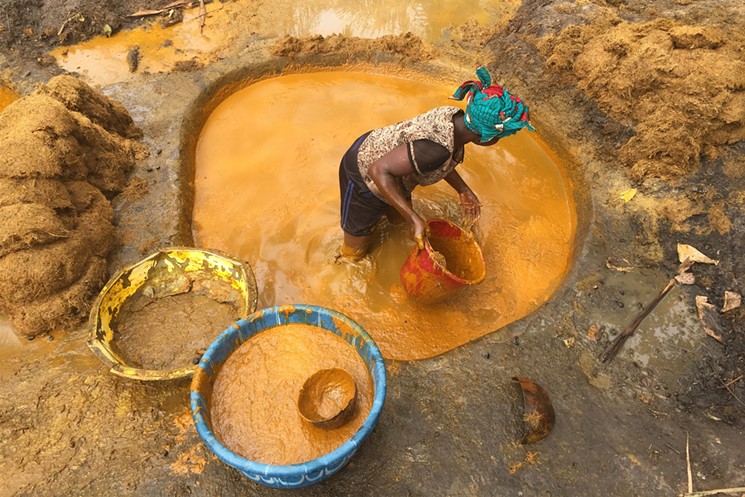 Still from Karimah Ashadu's Red Gold (2016). Centre d’Art Contemporain Genève and Faena Art.
Courtesy of the artist
Pauline Boudry and Renate Lorenz’s Silent takes a more tongue-in-cheek approach to gender. The film opens with a reinterpretation of John Cage’s 1952 score "4'33"," for which performers are instructed not to play their instruments for the duration of the piece.

Navigating the Biennale’s crowded opening was a who’s who of the South Florida art world. Iranian-American photographer Iran Issa-Khan, collector Kathryn Mikesell, and others mixed and mingled as they traversed the Faena Bazaar and Park’s narrow corridors and stairways to view the various installations in their entirety.

The show stands out in Miami's art landscape as a glittery foreign import. The diverse roster of films pushes the boundaries of experimental films, and the installations bring a new way of experiencing and curating art. For Faena, the show constitutes a reintroduction to the local art world after the venue's highly publicized debut last December.

The Biennale’s opening is just the district’s first in a crowded programming schedule that includes large-scale installations, sculptures, performances, and much more. But for a split second on that breezy Miami Beach evening, it seemed the Alan Faena’s dream of building a bridge between North and South America was slowly beginning to take shape.

All events are free and open to the public. RSVP at faenaart.org.