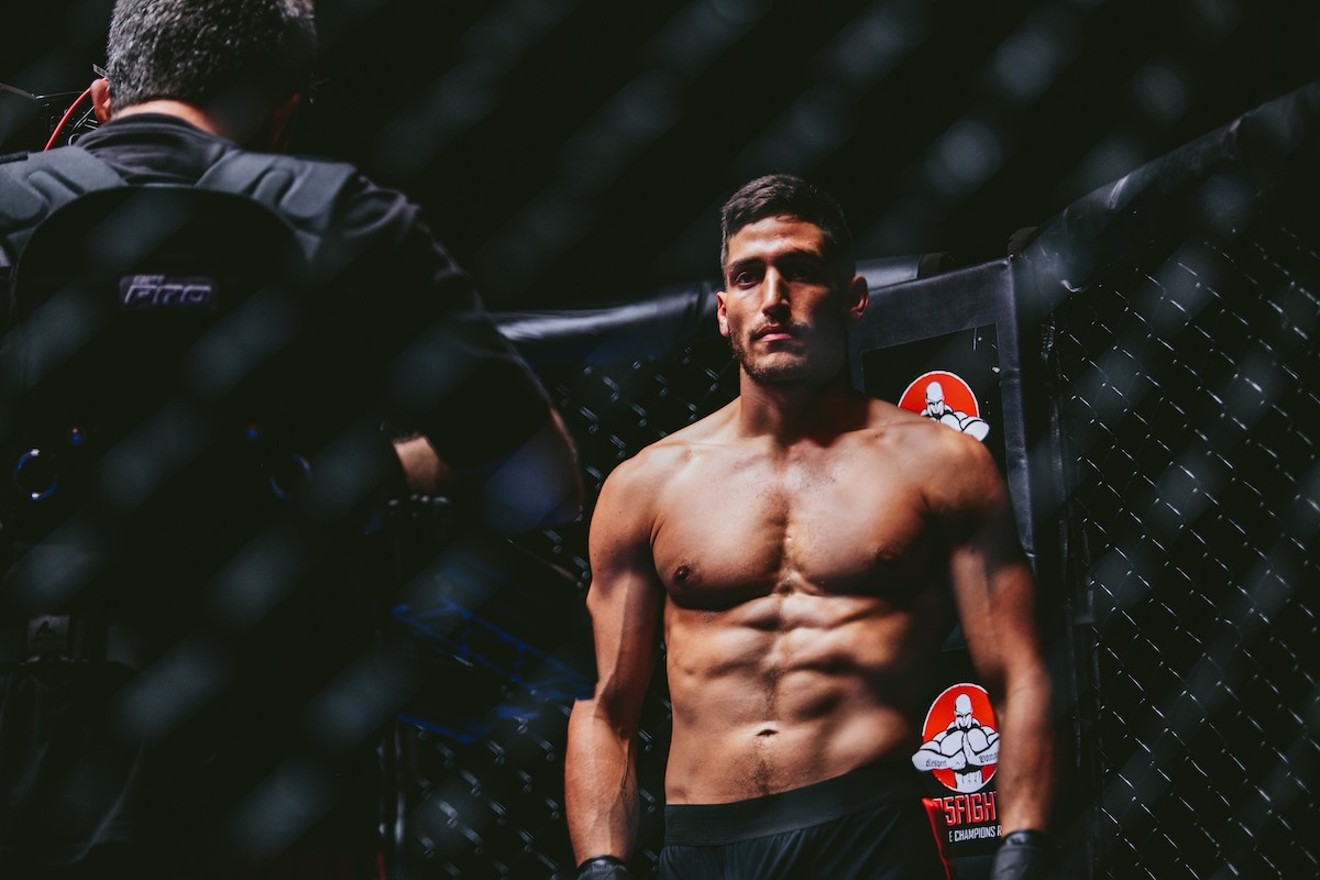 Miami native Cassius Corrigan directs and stars in Huracán. Photo by Galfry Puechavy
Cassius Corrigan has only one rule when it comes to filmmaking: Always have a Latino protagonist. The Colombian-American filmmaker is basking in the recent success of his first feature-length film, Huracán, which was picked up for distribution by HBO.

Available to stream on HBO and HBO Max starting today (September 11), Huracán tells the story of a mixed-martial-arts fighter with dissociative identity disorder and his journey to recovery.

Corrigan wrote, directed, and stars as the lead character, Alonso Santos. Although the action and fighting scenes are entertaining, Corrigan says that at its core, the film deals with Alonso's struggle with mental illness and the bravery he exhibits while in therapy.

"On the one hand, I have this story I've been wanting to tell about an amateur MMA fighter's struggle to make it as a professional," says the filmmaker, "but alongside that, the true heart and soul of the film is Alonso's dive through this intensive therapy."

The topic of mental health — let alone therapy — is seldom discussed or encouraged in Hispanic households. Corrigan takes the taboo subject and puts it on display in the most public way possible.

HBO acquired Huracán shortly after it screened at the New York Latino Film Festival in August 2019. Corrigan says the acquisition was not only validating, but also reassuring that his focus as a filmmaker is on the right path.

The first thing Corrigan wanted to know was what attracted HBO to his film — so he asked.

“It was so important for me to come home to Miami and make Huracán there."

"They told me it was interesting to them that I showed a part of the Latino community you don't often see in film or television," he says. "My movie features such a diverse cast — Colombians, Cubans, Dominicans — all different nationalities of what's authentically in Miami. Plus, it's a psychological thriller, it's got action, and we're touching on mental illness."

In addition to the storyline, Corrigan sought to tell a uniquely Miami story with an all-Miami cast and crew, and, of course, to film it locally. Corrigan, who splits his time between Los Angeles and Miami, knew as he was writing Huracán that the only setting for his story was his hometown.

Cassius Corrigan (right) on the set of Huracán.
Photo by Galfry Puechavy
"It was so important for me to come home to Miami and make Huracán there and put our culture on screen," he says.

The film sparkles with the allure of the Magic City and holds your attention with its compelling storyline. Locations include areas of the city that are rarely seen on screen, including Little Haiti, Overtown, Little Havana, and Hialeah.

"When you're in this low-budget, tiny film category, you're not going to have any actors in your movie that guarantee people are going to care about your film, so you have to give people a reason to care and be interested," he says.

The team filmed predominantly inside KO Zone in Little Haiti, using ordinary gymgoers as extras. With a minimal budget, Corrigan did not hire a stunt coordinator, but rather all the fight scenes were natural sparring sessions caught on camera.

"I really felt this was a way that I could put my stamp on the film and give audiences a sense of the thrill inside the cage and [showcase] all the diversity and complexity of the sport on-screen," he explains.

Corrigan says he envisions Alonso's story playing out in a trilogy. His current mission, he says, is to garner attention for his movie to ensure impressive viewership stats.

"I have to prove to [HBO] that there's an audience for this," he adds.

But above all, he says, "I'm mostly feeling a sense of excitement that our entire cast and crew, and the community we engaged within Miami that supported the film, can now share in its visibility and celebrate what we did together," says Corrigan humbly. "It's una locura de verdad!"

Huracán. Starring Cassius Corrigan, Yara Martinez, Milena Rivero, and Carlos Guerrero. Written and directed by Cassius Corrigan. Not rated. 103 minutes. Streaming on HBO and HBO Max.
KEEP MIAMI NEW TIMES FREE... Since we started Miami New Times, it has been defined as the free, independent voice of Miami, and we'd like to keep it that way. With local media under siege, it's more important than ever for us to rally support behind funding our local journalism. You can help by participating in our "I Support" program, allowing us to keep offering readers access to our incisive coverage of local news, food and culture with no paywalls.
Make a one-time donation today for as little as $1.