Courtesy of BlindLove
Beauty is in the eye of the beholder, or so the saying goes. It’s also the philosophy of most dating apps and websites. For the app BlindLove, however, any such beauty won’t be accessible until a deeper connection between two possible partners is created first.

That means with actual words and talking. What a bunch of lunatics, right?

BlindLove aims to reclaim love in the internet age. The concept is clever and adds a twist to a crowded market: After two people match on the app, they can message each other, but they cannot see the other person’s photo. The image is blurred, becoming clearer and clearer, little by little, as the two engage in meaningful back-and-forth, including texts and voicemail.

The idea occurred to BlindLove founder Federico Volinsky about two years ago after hearing his friends complain about dating apps. Volinksy himself was also dissatisfied by the digital dating scene until he met his future wife through social media. It was then that the concept really solidified.

“My wife is 5’11" and I’m short: I’m 5’7". Her first thought was she would never date a shorter guy," Volinsky says. "After us chatting for a few hours through different social media apps, she started to not be too concerned too much about my height. That’s where BlindLove comes in: It’s for finding true love in 2017.”

“Everyone has their own definition of love,” the company’s public relations advisor, Rembrandt Flores, adds. “For some people, love might be a one-night stand and so be it, but the way the app is designed, they may not be willing to invest the time to get that.”

They agree they want BlindLove to be the “antithesis” to the looks-first, swipe-left-or-swipe-right generation of dating apps. Instead of allowing for quick hookups, BlindLove requires users to engage in hours of meaningful conversations and interactions. 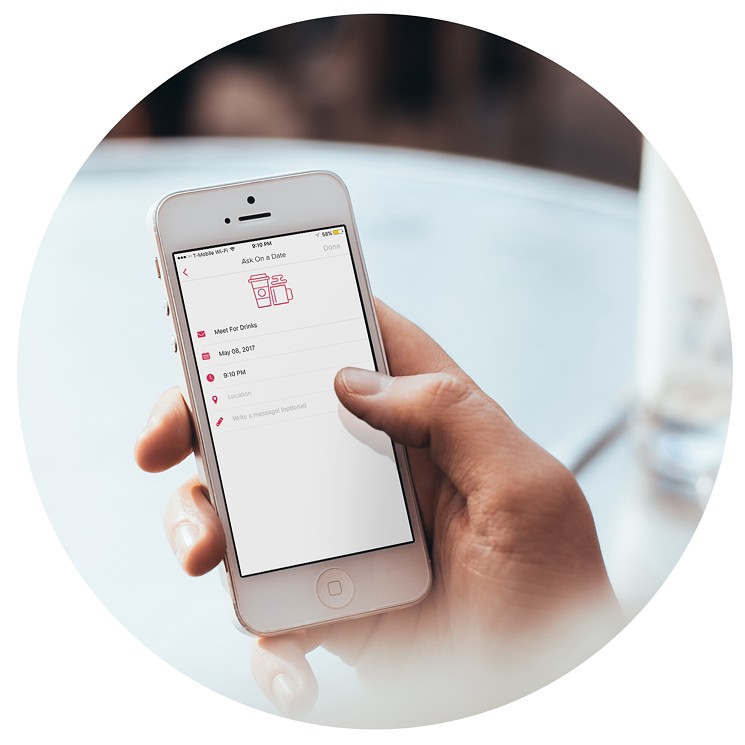 Potential soulmates are matched through survey questions, location, distance, and gender preference (the app is LGBTQ-friendly). Volinsky emphasizes that the app's matching algorithm is largely dependent upon similar “likes,” such as “going to the beach" or "watching telenovelas.” Once a match is made, either party, male or female, can contact the other.

Though BlindLove is a unique concept, the team has made one concession for users who absolutely must have some notion of what the person on the other side of the screen looks like. It’s called Sneak Peek, Flores’ idea, and it’s just that: a split-second view of a face.

“People are still hooked on the idea of seeing the other person,” Flores explains, “because we’re human and some people only care about looks, which is fine, I guess. So this is literally a nanosecond; this is for people who, say, really, really don’t like blondes or something like that.”

Those wishing to try Sneak Peek must pay for their shallowness via an in-app purchase. Otherwise, BlindLove is free to use.

Flores and Volinksy don’t have an exact release date yet because developers are still working out the last few kinks. However, Volinksy says they’re aiming for a worldwide release across all mobile platforms in mid-October.

“The one thing we want people to know is that we want real connections,” Flores says. “We want to be the platform for that real connection. We want it to equate love. Anyone out there, no matter where they are, who they are, we want everyone, all-inclusive. It’s not about how much money you make; it’s not about what you look like. Everyone deserves love, and we hope we are the way you find that.”

It seems true romance and the simple ability to hold a conversation have gone the way of the flip phone: A rare few people still use them, but they’re far and few in between. For many, the idea of getting to know someone first has evaporated into the ether of the cloud, along with an untold number of unsolicited dick pics.

BlindLove intends to bring us back to a time when a good fit went beyond the physical. Whether the concept works remains to be seen, but at the very least, BlindLove has a clear vision of the goals it hopes to achieve in the lives of single people everywhere.