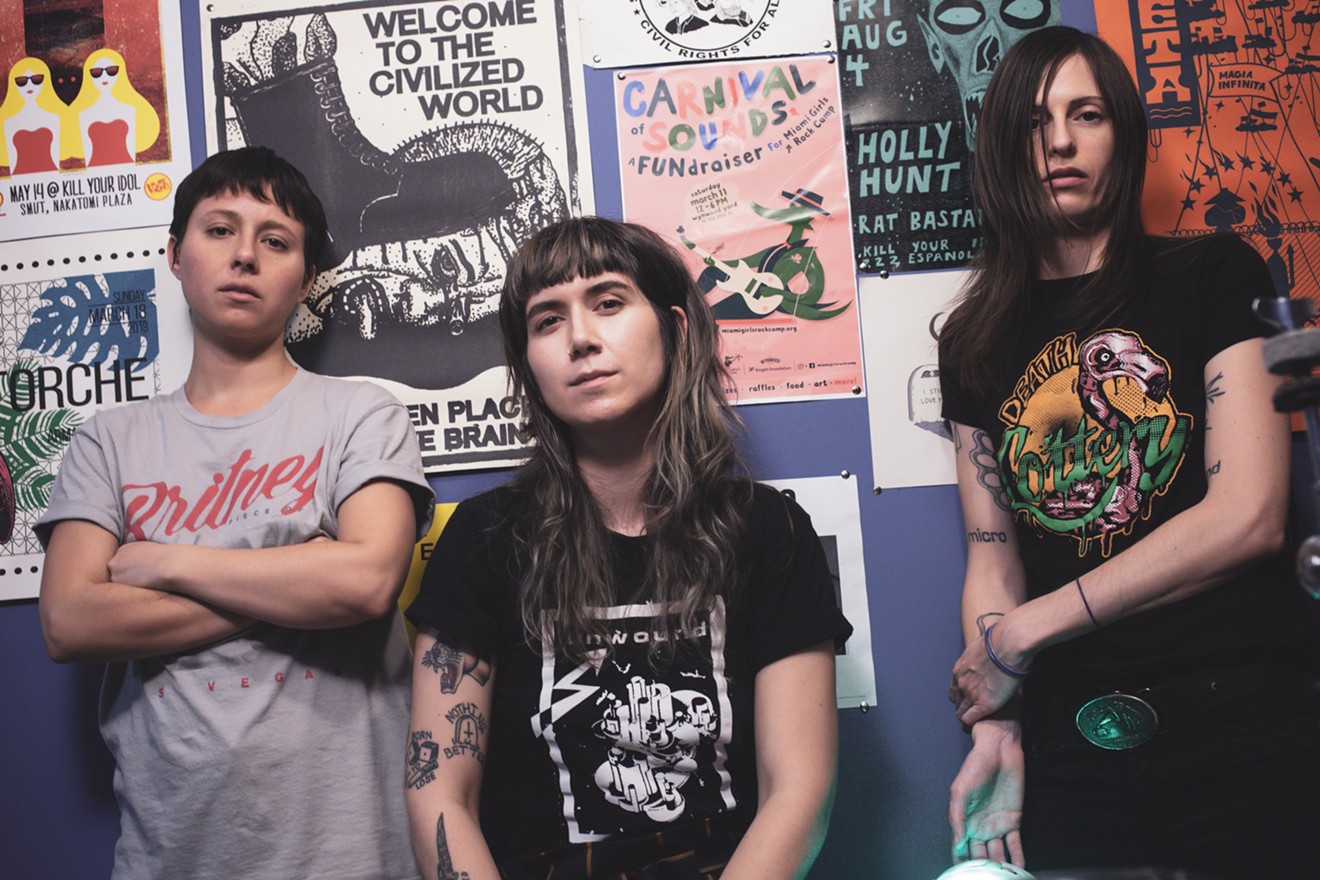 Three of Miami's finest acts are joining forces to rock your face off at Churchill's Pub. Thursday evening, Las Nubes, Palomino Blond, and Womanhouse will share the stage at the legendary dive. To get pumped for this one, give Las Nubes' June release, SMVT, a spin or ten. Then press play on Palomino Blond's single "Creature Natural." 9 p.m. Thursday at Churchill's Pub, 5501 NE Second Ave., Miami; churchillspub.com. Admission costs $5.

Asako I & II has owned the big screen at Coral Gables Art Cinema since July 26. Your last chance to see it is this Thursday evening, so get moving. The 2019 flick from director Ryusuke Hamaguchi, capturing a Japanese love story chock-full of drama, has made waves across the globe. It was a hit at the 2018 Cannes Film Festival, and Miami too has been showing it some love. 6:15 p.m. Thursday at Coral Gables Art Cinema, 260 Aragon Ave., Coral Gables; gablescinema.com. Tickets cost $11.75.

Solange Knowles is already a badass. The younger sis to Queen Bey has carved her own niche in the music world. Now her art film, When I Get Home, is being screened at select spots across the nation. Directed by Knowles, the flick accompanies her album of the same name and is loaded with cowboy-themed goodness — an ode to her hometown of Houston. The film will be shown twice this Friday (at 6:45 and 8 p.m.) as part of ICA Miami's First Friday festivities. 6 to 10 p.m. Friday in Paradise Plaza, 151 NE 41st St., Miami; icamiami.org. Admission is free with RSVP.

Let's all feel old here: 311 has been rocking for more than 30 years! The Nebraska-bred band is still going strong, and this Friday evening, the group will take its 13-album catalog to Coral Sky. The band's latest release, Voyager, dropped last month, so get ready for new nuggets too. The openers are strong for this concert, including Dirty Heads, the Interrupters, and Bikini Trill. Get there early and show everyone some love. 5:45 p.m. Friday at Coral Sky Amphitheatre, 601-7 Sansburys Way, West Palm Beach; livenation.com. Tickets cost $20.50 to $110.50.

There are interesting people in the world, and then there is Walter Mercado. The Puerto Rican icon has acted, danced, and authored books. But he's best known as your abuela's favorite caped astrologer. This Saturday afternoon, he'll discuss his dazzling career with Noticiero Univision Edición Nocturna anchor Enrique Acevedo. Important, amigos: This program will be entirely in Spanish. 2 to 3 p.m. Saturday at HistoryMiami Museum, 101 W. Flagler St., Miami; historymiami.org. Tickets cost $20.

One of your favorite RuPaul's Drag Race stars is coming to town. The one and only Katya Zamolodchikova will take her standup show Help Me, I'm Dying to the Olympia Theater this Saturday. You might remember Katya from Season 7 of Drag Race and Season 2 of Drag Race: All Stars. Her show promises comedy, storytelling, video, and dancing, so expect to be dazzled. 7 to 10 p.m. Saturday at Olympia Theater, 174 E. Flagler St., Miami; olympiatheater.org. Tickets cost $25 to $150.

It's always rad to see performers before they make it big. So you'll probably want to experience Charlotte de Witte's set at Space this Saturday evening before she owns the world. The Belgian DJ has made a name for herself in Europe, including jamming on BBC Radio 1 and owning the cover of DJ Mag. More impressive than her resumé are her tunes, which are always infectious and often up-tempo. 11 p.m. Saturday at Space, 34 NE 11th St., Miami. Tickets cost $15 to $30 via residentadvisor.net.

Entirely too much yumminess will be available at MIA Beer Company this Saturday. As part of the event La Ventana at MIA, Pastelito Papi will pass around pastelitos, Masa Craft will serve croquetas, and MIA will pour brewskis. Everything will be offered pairing-style. For example, your 14-hour smoked-brisket croqueta topped with white truffle Parmesan aioli might be paired with Red Viper Smoked Red Ale. Pro tip: Only 50 tickets are available, so scoop them up while you can. 1 to 6 p.m. Saturday at MIA Beer Company, 10400 NW 33rd St., #150, Miami. Tickets cost $23.14 via eventbrite.com.

Bill Maher for years has had his finger on the pulse of all of the nation's looniness and since 2003 has relayed his engaging thoughts via Real Time With Bill Maher. This Saturday, he'll dish his latest and greatest commentary at the Fillmore, so prepare to laugh (and perhaps be offended). 8 p.m. Saturday at the Fillmore Miami Beach, 1700 Washington Ave., Miami Beach. Tickets cost $62 to $149.50 via livenation.com.

Fridays are always fun at Boxelder Craft Beer Market, which offers a free beer to shotgun at 4 p.m. Now you can stay later for laughs once a month during the Loosey Goosey Comedy Hour. Hosted by Danny Benvante, the 60-minute showcase presents local comics. Just be careful not to snort that beer when you laugh. 5 to 10 p.m. Friday at Boxelder Craft Beer Market, 2817 NW Second Ave., Miami. Admission is free; RSVP via eventbrite.com.

This Sunday, the Miami Girls Rock Camp 2019 Grand Finale Showcase will happen at the Ground. The week leading up to the show, a group of local girls and nonbinary children has learned about new instruments, songwriting, and live performance. At the annual summer camp, classes are taught by volunteers, many from Miami's local music scene. Let's show everyone involved some love this weekend. 6 p.m. Sunday at the Ground, 24 NE 11th St., Miami; miamigirlsrockcamp.org. Tickets cost $10.

As you might already know, Kill Your Idol is a Miami Beach institution that throws killer parties. Case in point: Drag Mondays. Every Monday at the hip bar and live music venue, expect jams by DJ Zehno and Skot, performances by resident divas the Eye Dolls, and drink specials such as $2 PBR and Jell-O shots. Karloz is always your kind host. 10 p.m. Monday at Kill Your Idol, 222 Española Way, Miami Beach; sub-culture.org. Admission is free.

It's time to kiss Kiss goodbye. The iconic band's End of the Road World Tour is set to roar into the BB&T Center, and fans can count on all the hits. Enjoy all of your faves — from "Shout It Loud" to "Rock and Roll All Nite" — performed live one last time. If you haven't seen Kiss in all of its long-tongued, face-painted glory, this is your last chance. 7:30 p.m. Tuesday at BB&T Center, 1 Panther Pkwy., Sunrise; thebbtcenter.com. Tickets cost $35.25 to $260.75.

Two global soccer powerhouses will clash Wednesday evening at Hard Rock Stadium. The 26-time La Liga champ FC Barcelona will take on two-time Serie A champion SSC Napoli in the first-ever La Liga-Serie A Cup. Among the Barca stars you might catch are Lionel Messi, Luis Suárez, and Gerard Piqué. Lorenzo Insigne is always a blast to watch on the Napoli side. May the best Europeans win! 7 p.m. Wednesday at Hard Rock Stadium, 347 Don Shula Dr., Miami Gardens. Tickets cost $45 to $185 via ticketmaster.com.