Courtesy of the Bass
Some people use New Times' annual Best of Miami issue as a dining guide. Others look up the hottest nightlife options in the city. But for Miami's creative-minded citizens, the issue is a yearbook of sorts — a look at the artists and institutions doing the most to advance culture in South Florida. So who's pushing the arts envelope in these days? Read on. 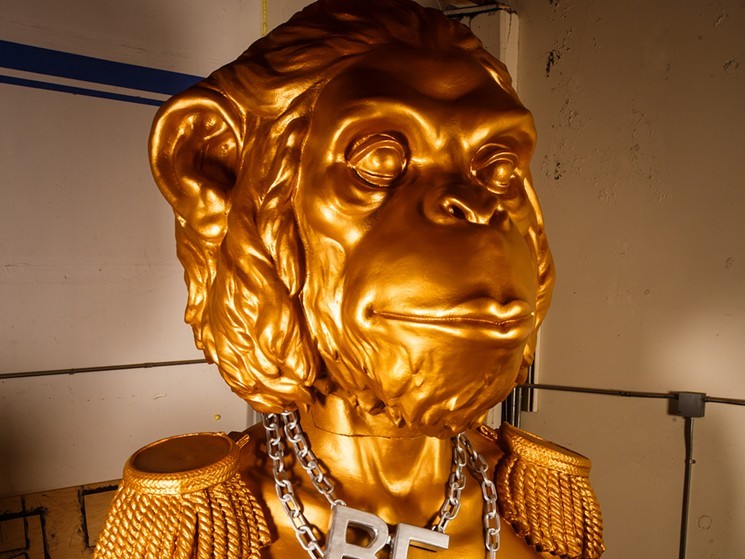 HG Contemporary/Laure Kimpton
Best Art Fair: Aqua Art Fair. Finding Basel Week balance can be tricky: You want to see great art, but you also don't want to take yourself too seriously. Aqua Art Miami lets you do both. Among the galleries showing at South Beach's Aqua Hotel in 2017 was an exhibit curated by the Consulate General of Canada, which showed off some of our northern neighbors' most impressive work. But visitors also witnessed quirkier stuff such as live tattooing by renowned tattoo artist Thea Duskin, and a 16-foot-tall golden bust of a female monkey by artist Laura Kimpton, who earned her fame at Burning Man. Aqua also offers some of the cheapest drinks you'll find at a South Beach fair, running a daily two-for-one happy hour — a welcome reprieve from the prohibitively priced Ruinart bubbles at the convention center.

Courtesy of Space Mountain
Best Art Gallery: Space Mountain Miami. No, Space Mountain Miami isn't a spinoff of the popular ride at the Magic Kingdom. But though you can't rocket through Disney's version of outer space at this Little Haiti gallery, you might just be able to do things equally awesome. Led by director Alice Apfel, Space Mountain stages exhibits by local artists, often collaborating with artists from Miami institutions such as Borscht Corporation and PornNail$. These aren't stuffy affairs; in March, for example, artist Katiana Elena installed an immersive ode to Kanye West. Apfel keeps the space operational largely by programming related events such as live music, film screenings, and political talks. One of them, a late-2017 "Salacious Sunday" sex-ed workshop, sadly had to be canceled after it proved to be a little too experimental for enough people to RSVP. But hey, pushing boundaries is what art is all about, right?

Zachary Balber
Best Art Museum: The Bass. The Bass is back, and it's bigger than ever. When the ocean-facing museum finally reopened last October after a lengthy renovation, critics were ready to pounce. Construction delays had moved its reopening date back a full year. Would the results be worth the wait? Totally. One of the Bass' opening exhibitions, "Good Evening Beautiful Blue" by Ugo Rondinone, swiftly took over Miami's social media feeds, as photos and selfies with the artist's melancholy clown sculptures racked up likes and shares. And the renovations themselves have only enhanced visitors' experience. There's now double the space inside, including a café and a center for kids and teens. 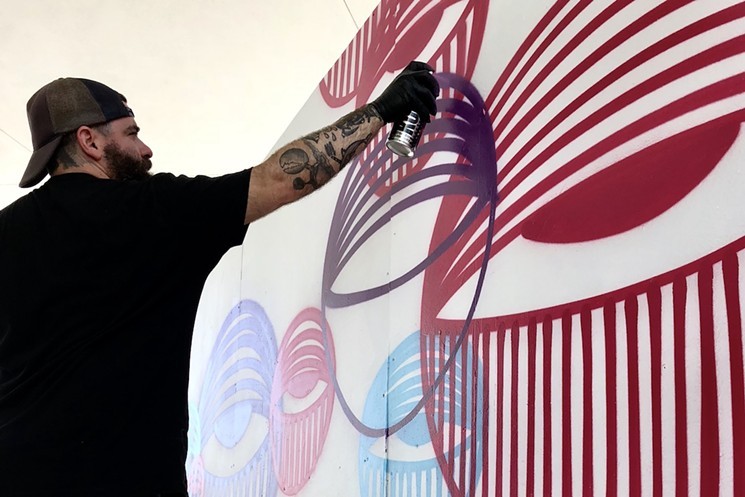 Ben Morey
Best Street Artist: Ahol Sniffs Glue. Loud and proud Miamian Ahol Sniffs Glue is prolific as hell. This tattooed, bearded, golden-grill-wearing street artist has painted his sleepy eyeball murals and tags all around the city — on electrical boxes, metallic store shutters in downtown Miami, inviting walls in Wynwood and South Beach, and the interiors of residential, commercial, and office spaces. Ahol is devoted to the Magic City's art hustle. In the last year, he opened a downtown pop-up souvenir kiosk that sold "A hole in one" golf balls and other knickknacks, dropped an art book titled Cellular Fuckery, added solid 14K gold necklaces in the form of his quirky Miami character illustrations to his luxury jewelry line, and partnered with a Brazilian shoe company to release a line of chancleta sandals. And though he's been invited to show his art and do projects all over the world, Ahol is fully committed to his hometown of Miami, frequently reinforcing his love for the 305 with his signature tag line: "Miami Full Time."

Mark Morgan/Flickr
Best Public Art: Peace & Love by R&R Studios. Over the last few years, "architects of hope" Roberto Behar and Rosario Marquardt have softened the hell of flying in and out of Miami International Airport. Travelers from near and far zip past the pair's work daily: the words "Peace & Love" sculpted of flower petals. The colorful welcome sign promises all will be well once flyers make it past the low ceilings, cranky TSA agents, and long queues. Behar and Marquardt are responsible for art installations throughout not only MIA, but Miami at large, crafting visually arresting works meant to instill a tranquil and reflective respite from the crushing chaos and noise of the bustling city. Behar and Marquardt's firm, R&R, was also behind the past Bésame Mucho installation at MIA, which greeted international arrivals stretching their legs after long security checks and even longer flights. Although R&R bears the initials of the founders' first names, in truth, those letters could stand for "rest and relaxation" — fleeting as they may be.

Courtesy of New World School of the Arts
Best School: New World School of the Arts. When Tallahassee was set to slash funding for New World School of the Arts last year, a veritable who's who of homegrown talent rose up to speak out against the cuts. The downtown Miami magnet high school and college counts Moonlight playwright Tarell Alvin McCraney, Cocaine Cowboys director Billy Corben, and Hamilton music director Alex Lacamoire among its alumni. In the end, lawmakers made a last-minute decision to abandon their plans. That's good news for locals: The 30-year-old institution provides a topnotch arts education and is ranked the 17th best school in Florida by U.S. News & World Report. Best of all, it's a public school, so any kid in the county has the chance to attend and become Miami's next big thing.

Karli Evans
Best Performance Artist: Sleeper. Visual and performance artist Sleeper's name is a fitting one. He's low key IRL but takes elements from the universal subconscious, mixes them with nightmares and dreams, and molds them into art. Sleeper has studied his craft since third grade and was the valedictorian at the New World School of the Arts College, where he majored in sculpture. His work incorporates performance and mind-blowingly creative costumes he calls "suits," which become fascinating, surreal sculptural artifacts post-performance. Sleeper also works to foster an alternative queer scene in Miami with Gender Blender, which provides a stage for queer artists and musicians; and the LGBTQ+ monthly night Counter Corner, which he established with bearded drag queens Juleisy y Karla. Both events provide queer performers with a safe space to bring their artistic visions to life. Sleeper is also a member of the noise band Squid Squad, makes a mean cocktail at downtown bar the Corner, and sometimes rides an absurdly tall bicycle around downtown. He is always creating or doing something worth watching.

See more Best of Miami 2018 picks at miaminewtimes.com/best-of.
KEEP MIAMI NEW TIMES FREE... Since we started Miami New Times, it has been defined as the free, independent voice of Miami, and we'd like to keep it that way. With local media under siege, it's more important than ever for us to rally support behind funding our local journalism. You can help by participating in our "I Support" program, allowing us to keep offering readers access to our incisive coverage of local news, food and culture with no paywalls.
Make a one-time donation today for as little as $1.