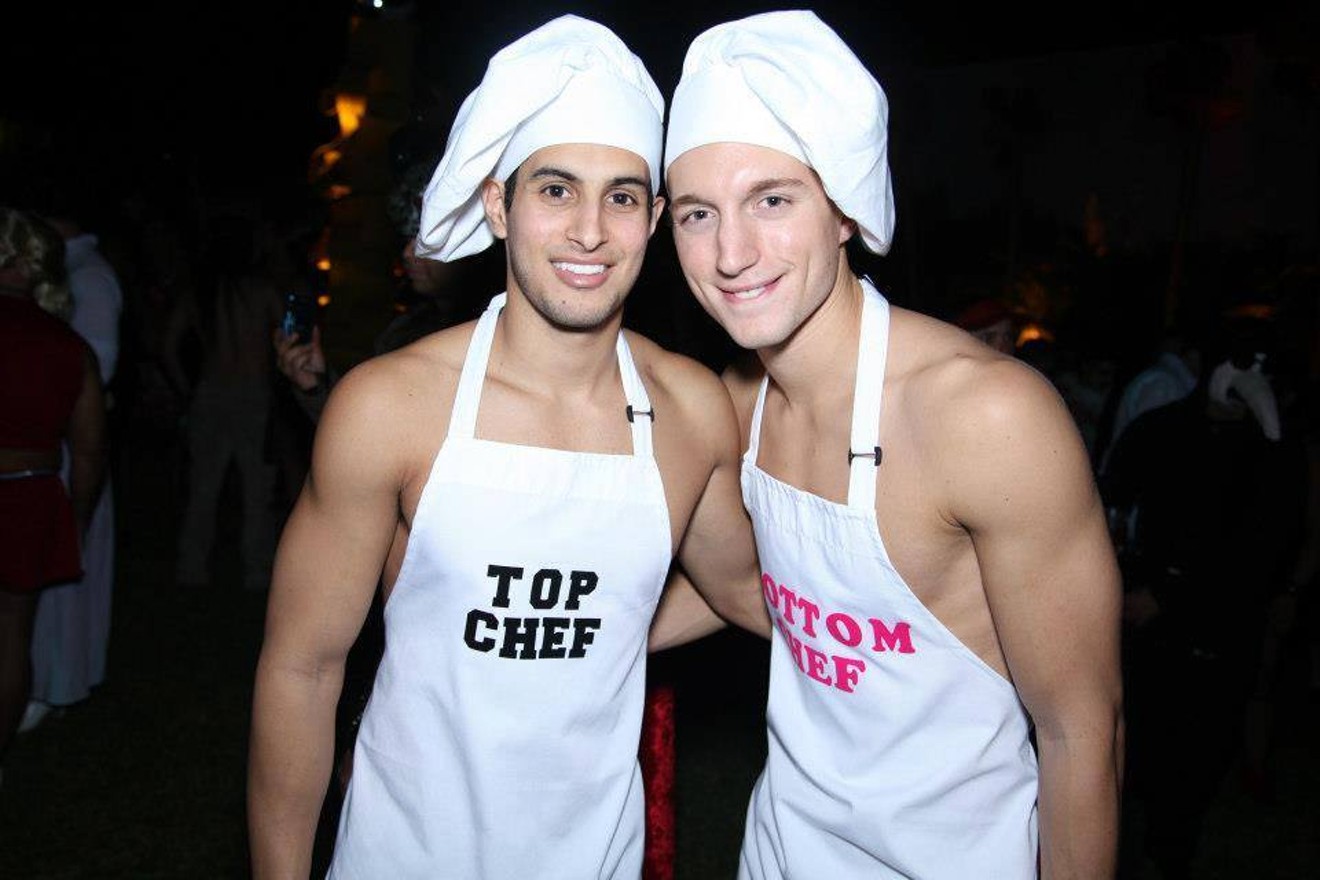 Courtesy of SAVE
Halloween haters will treat this weekend like any other, doing all the things boring, responsible adults do. The rest of you can start with New Times' costume party and Halloween party guides, which run through Tuesday (and if you're really all about the spookiest season, check out our Day of the Dead guide too).

That being said, this weekend is still pretty freaky, with HistoryMiami's Miami City Cemetery tour and SAVE's Halloween Ball, as well as kid-friendly scares such as the Frost Science Museum's Spooky Science Monster Mash and Fairchild Tropical Botanic Garden's Cars in the Garden: Halloween Edition. If Halloween isn't your thing (what's wrong with you?), you can head to the Bass' grand reopening or the Pop Cats convention. Just try not to be too responsible, OK?

Courtesy of HistoryMiami
Ghosts of Miami City Cemetery Walking Tour at Miami City Cemetery. Hanging out in cemeteries made you a badass in middle school (right?), but this weekend it'll make you a history buff. Join HistoryMiami in celebrating the spookiest season with the Ghosts of Miami City Cemetery Walking Tour, visiting the resting places of the area's most influential dead people. You'll hear about the "Mother of Miami," Julia Tuttle, and the causes of death that landed some notable inhabitants six feet under. At the very least, you'll get some narrative fuel to scare away trick-or-treaters so you can keep the last bag of peanut butter cups for yourself. 5:30 and 8 p.m. Friday, October 27, at Miami City Cemetery, 1800 NE Second Ave., Miami; 305-375-1492; historymiami.org. Tickets cost $30 to $40.

Inferno: SAVE's Halloween Ball at Magic City Casino. If you could dress as only an angel or the Devil for Halloween, which would you choose? Now let that decision guide whether you'll go to "Heaven" or "Hell" at Inferno, SAVE's Halloween ball. "Hell" includes music from Ralphi Rosario, drag queen performances, and a costume contest with a $1,000 grand prize. "Heaven" is all of the above plus a VIP lounge and open bar by Bacardi. The best part: You'll be partying with one of Miami's most prominent LGBT advocacy organizations. 9 p.m. Friday, October 27, at Magic City Casino, 450 NW 37th Ave., Miami; savehalloween.org. Tickets cost $35 to $100.

Gabrielle Union at Books & Books. Gabrielle Union has become outspoken on the issue of sexual assault since her role in Birth of a Nation and the rape scandal involving that film's director, as well as after accusations against Harvey Weinstein became public. The grace and power of her words are a good indication of how her first book, We're Going to Need More Wine, will address sexism, racism, fame, and motherhood. With the purchase of the book, you can see the actress in conversation with Isis Miller and get your copy signed. 8 p.m. Friday, October 27, at Books & Books, 265 Aragon Ave., Coral Gables; 305-442-4408; booksandbooks.com. Vouchers cost $28.88 and include a copy of the book and admission to the event.

Courtesy of Pop Cats
Pop Cats at the Miami Airport Convention Center. Joining the canon of chicken-and-egg-style queries is the relationship between cats and the internet. Were we obsessed with cats before YouTube and Vine compilations, or did the internet make us obsessed? Regardless of the answer, there are enough Instagram-famous felines to justify Pop Cats, a convention celebrating the furry creatures and their devotees. Bring Fluffy along for talks by "catsperts," meet-and-greets with other cats, cat-inspired art, vendors of cat products, and other feline-inspired fun. So, basically, heaven. 11 a.m. Saturday, October 28, at the Miami Airport Convention Center, 711 NW 72nd Ave., Miami; 306-988-7113; popcatsshow.com. Admission costs $22.

Fright Night en el Callejon at Wynwood 5th Ave. There's nothing frightening about salsa, except maybe a few perverts on the dance floor. But one Wynwood haunted house is about to change that fact. Salsa Lovers (as in salsa dancing, not the tomato-based dip) and Wynwood 5th Ave have put together Fright Night en el Callejon. Plan to get haunted by ghouls and goblins and romanced by Jr Sosa and David "Melao" DJ sets. Dancing, bottle specials, and other treats will make this party a proper Miami Halloween. 9 p.m. Saturday, October 28, at Wynwood 5th Ave, 2451 NW Fifth Ave., Miami; facebook.com/salsaloversmiami; 305-220-7115. Admission costs $15.