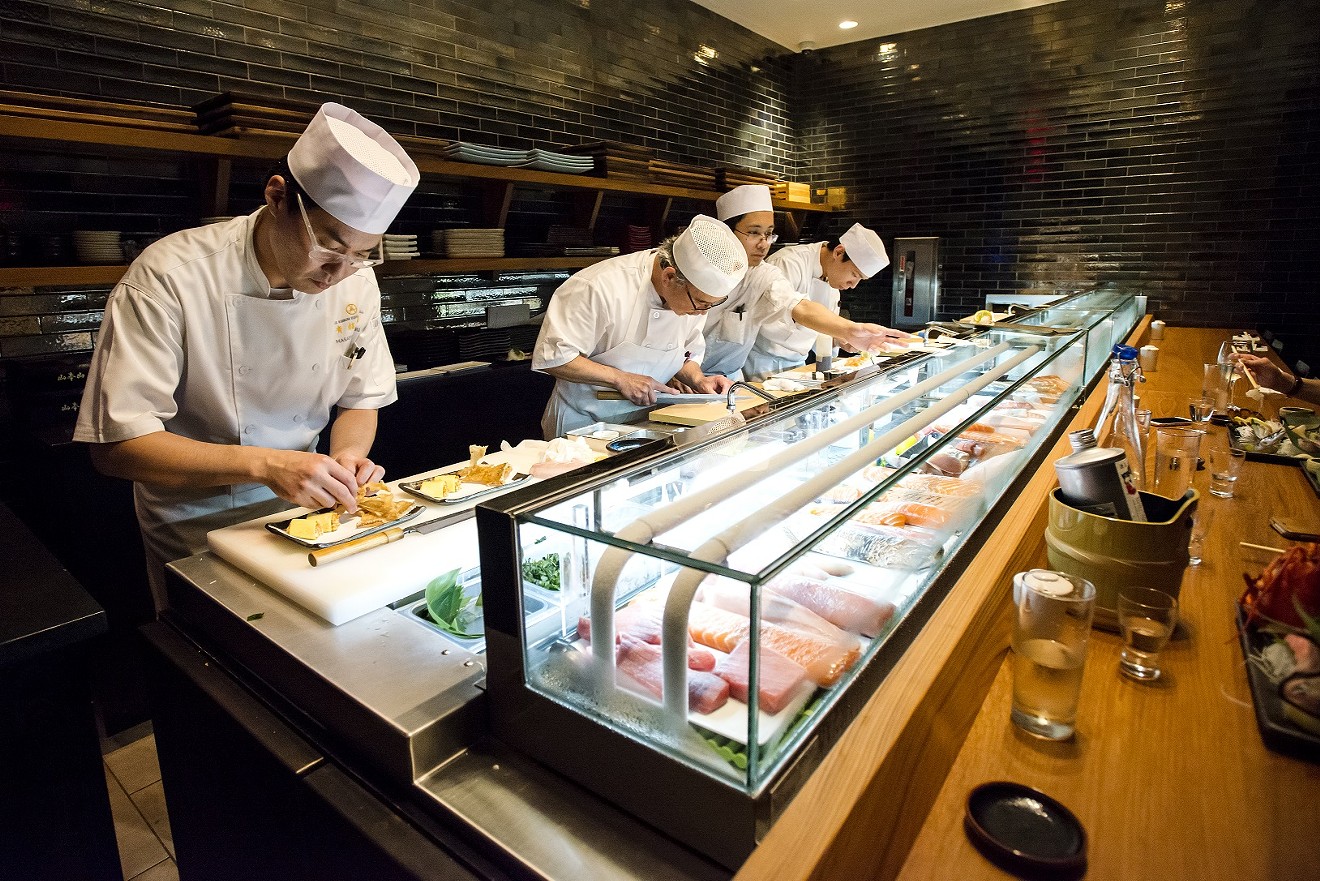 Brothers Bruce and Eric Bromberg's newest venue in their famed Blue Ribbon lineup specializes in authentic Japanese cuisine that's understated yet spirited. The large wooden double doors of the entrance open to the dining room and, beyond it, the sushi bar, a stage where the performers slice, roll, and mold varieties of traditional nigiri, sashimi, and maki. 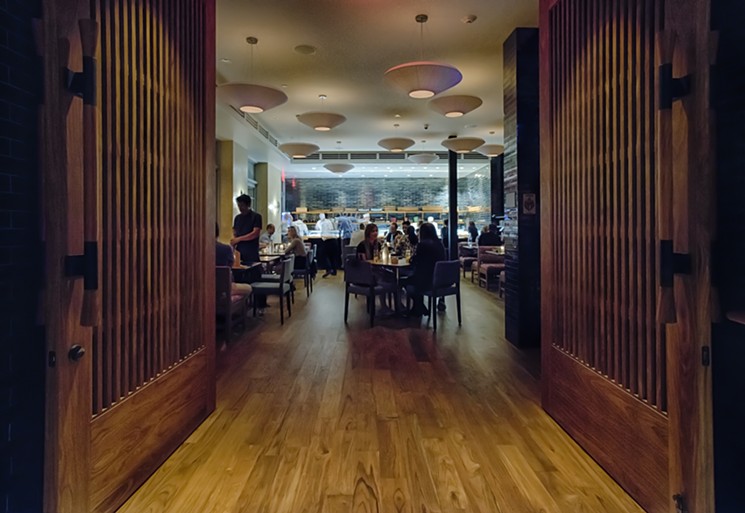 The restaurant's grand yet understated entrance.
Courtesy of Steve Hill and Blue Ribbon Sushi Bar & Grill
The Bromberg brothers opened Blue Ribbon Brasserie in New York City in 1992, shepherding in an age of casual dining. Their first dive into sushi began in 1995 after meeting partner Toshi Ueki, who brought his Japanese expertise to the opening of the first Blue Ribbon Sushi. Two decades later, the brothers have a repertoire of more than 15 restaurants, including an impressive seven serving Japanese cuisine. 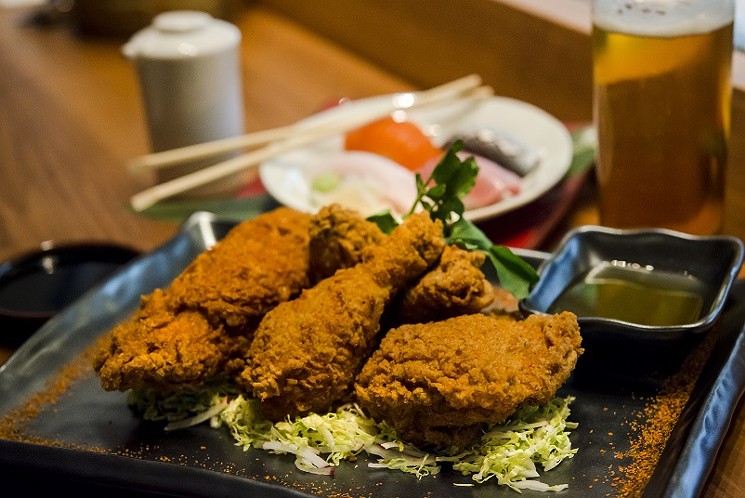 Fried Chicken with Wasabi Honey
Courtesy of Steve Hill and Blue Ribbon Sushi Bar & Grill
The intimate space at the Miami Beach location seats diners close enough to their neighbors so wandering eyes can indulge in plate envy from every angle. The menu, brought to life by executive chef Masayuki Komatsu, pairs traditional sushi and sashimi options with cooked specialties such as fried chicken ($26), oxtail fried rice ($24), and salmon teriyaki ($29). The fried chicken, a fan favorite, is accompanied by a side of wasabi honey to dip or drizzle. The bird is dusted in matzo meal before frying, leaving a light, crisp exterior. 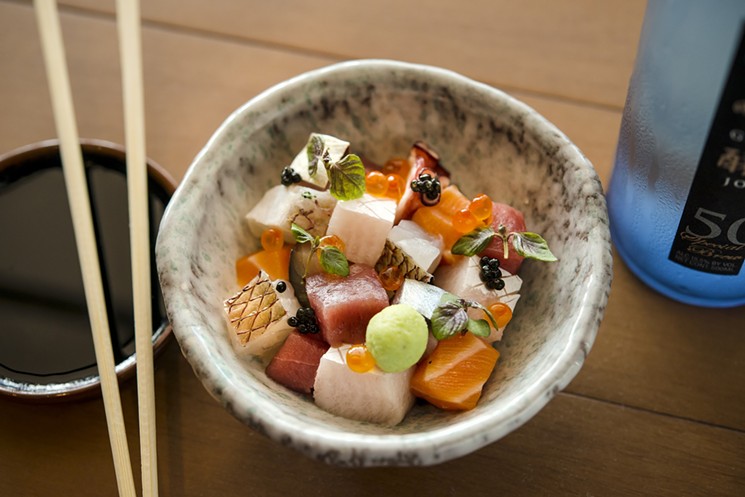 Courtesy of Steve Hill and Blue Ribbon Sushi Bar & Grill
Sushi lovers will rejoice at the refreshingly traditional sushi and sashimi options. Appetizers include sake tataki ($14.25), kanpachi usuzukuri ($23), and tako sumiso ($14). Fresh fish is categorized by its place of origin – Pacific Ocean, Atlantic Ocean, etc. ($4 to $9 per piece). For a bit of everything, try platters such as the sushi deluxe ($35) or the sashimi 12-piece combo ($30.25). 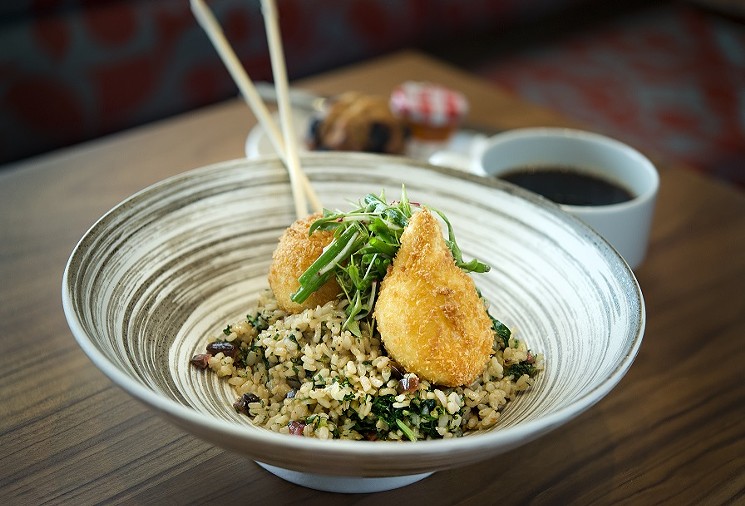 Vegetable fried rice with fried egg
Courtesy of Steve Hill and Blue Ribbon Sushi Bar & Grill
Manager Martin Borkan, who has been with the Miami location since its inception, has a palpable passion for the concept and can be seen hustling across the restaurant's busy floor. He says there has been one key reason for the eatery's smooth opening: "The most important part is we took our time. We didn't have to force anything."

The opening comes on the heels of a two-year renovation of the Plymouth Miami Beach. The hotel's new look is chic and comfort-driven, and the restaurant matches that aesthetic. Michael Satsky and Shawn Vardi, partners at Think Hospitality, are customers-turned-investors: After visiting and loving Blue Ribbon, they decided to bring it home to their new venture in Miami.

“Blue Ribbon is the Plymouth's soul mate,” Satsky says. “Having a timeless New York City casual-dining culinary expertise throughout our property empowers us to channel our authentic artistic culture.” The bar
Courtesy of Steve Hill and Blue Ribbon Sushi Bar & Grill
The extensive renovation revived the historic Miami Beach boutique hotel, which originally opened in 1940, from what had been a barren and neglected piece of local history.

"After the acquisition of the Plymouth Hotel, we were staring at the face of the most historic building on Collins Park, that was barren inside with the sky for a ceiling,” Vardi says. “Although there were many challenges having to restore certain foundations to its original 1940s self, along with the vision of Fernando Santangelo, we were able to develop an authentic Mediterranean feel and offer an ageless design."