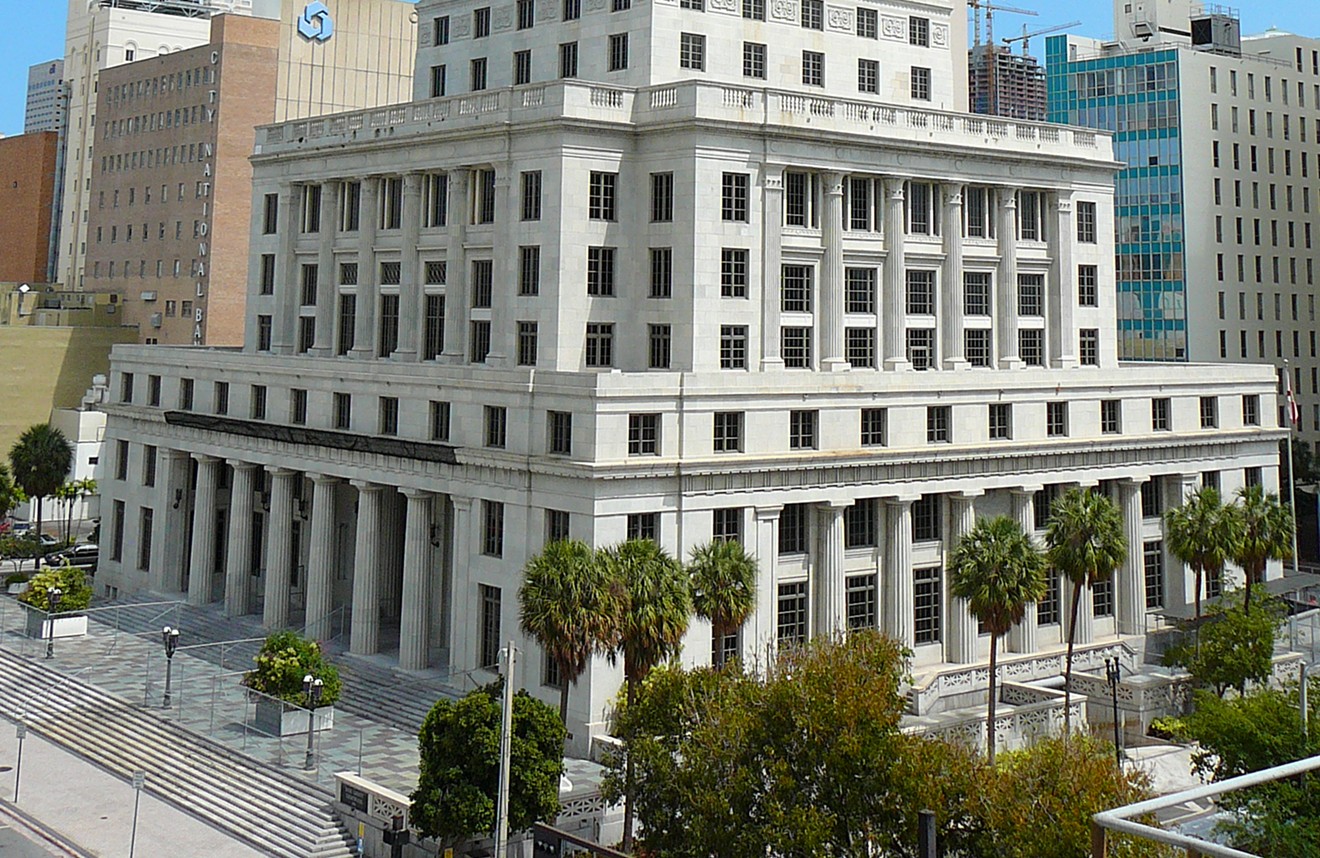 The Miami-Dade County Courthouse at 73 W. Flagler St. Photo by Avarette / Wikimedia Commons
There's no question the historic Miami-Dade County Courthouse, completed in 1928, is in bad shape. County commissioners have described the building as "hazardous" and "experiencing corrosion, rust, water intrusion, algae and mold penetration, termites, poor air quality, and potential asbestos exposure." Yet voters have been clear they don't want to pay to rebuild it.

But keeping such a building in service for 90 years is almost certainly harmful to the people who work there. Earlier this month, Yvonne Stanley, a former courthouse secretary, filed a lawsuit against Miami-Dade, saying her daily exposure to asbestos and mold gave her Stage II lung cancer.

"As a result... [Stanley] underwent a lung extraction in November of 2017," the April 30 complaint reads, adding Stanley is undergoing chemotherapy.

County spokesperson Myriam Marquez said she could not comment on the suit because of the pending litigation. Stanley's attorney, Michelle Muskus, also declined to comment.

Stanley began working at the courthouse in 1994 and was moved to another county building in Doral in 2005. According to her complaint, she has never been a smoker and never suffered from respiratory issues prior to her exposure to mold and asbestos at her job. The lawsuit indicates she was exposed to poor air quality throughout her employment, including her time at the Northside District at 9105 NW 25th St. in Doral.

County employees have complained about conditions at the courthouse for years. At a meeting of the county commission's public safety committee in 2014, Chief Judge Bertila Soto said the 576 people who work at the courthouse were exposed daily to leaks, termites, mold, and asbestos. The air quality on the 19th and 20th floors grew so bad at one point they had to be temporarily evacuated.

"We have lawyers working from their homes through VPN, and other employees throughout the building, because they cannot be on those floors," Soto said.

A 2016 report by the county inspector general also showed that officials had failed to inspect the building since 1988.

After tests in 2013, the county found asbestos in the courthouse and began remediation. An update regarding whether the abatement was complete was unavailable from the county this week.

The county estimates a new civil courthouse would cost at least $400 million to construct. In April, the Miami Herald revealed the company behind the Brightline train had quietly proposed a plan to the county to erect the new building in exchange for decades of payments and 35 years of running the facility. But county commissioners opted to punt on that idea and for now are still taking bids for other proposals.

In the meantime, courthouse employees say they're forced to continue working in a building that's dangerous to their health.

"Every day this decision is delayed, there are more taxpayer dollars that are going into a courthouse that is too small, technologically inadequate, and it's making people sick," Judge Jennifer Bailey told the Herald in April.

The county has yet to file a response to Stanley's lawsuit.
KEEP MIAMI NEW TIMES FREE... Since we started Miami New Times, it has been defined as the free, independent voice of Miami, and we'd like to keep it that way. With local media under siege, it's more important than ever for us to rally support behind funding our local journalism. You can help by participating in our "I Support" program, allowing us to keep offering readers access to our incisive coverage of local news, food and culture with no paywalls.
Make a one-time donation today for as little as $1.