Nearly 800,000 homes in Miami-Dade and Broward Counties are at risk. Photo by John Carkeet / Flickr
We all know Miami will be underwater sooner or later. But while some folks plot how to spend their Atlantean retirement down here, others are asking the all-important question: How much is it gonna cost?

A recent study puts the climate crisis in stark perspective: According to a report from Zillow and the environmental nonprofit Climate Central, Florida is the most at-risk state for flooding by the year 2100. In Miami-Dade and Broward Counties alone, there are 792,226 at-risk homes worth more than $336 billion.

Yet despite growing awareness of climate change and the risk of sea-level rise, development has continued at a breakneck pace in risk zones such as South Miami and Miami Beach.

Cheryl Young, a senior economist for Zillow, tells New Times this development is driven by people's high demand for waterfront property, despite the known risks of flooding.

"People minimize their understanding of things like floods," Young says. "People still think, 'I know I'm in a flood zone but what are the chances?' This project of ours shows that even by 2050, there is a real risk."

In the study, Zillow and Climate Central analyzed patterns of homebuilding in areas with major risks of flooding within the next 80 years. In total, 3.4 million existing homes worth $1.75 trillion are in danger of inundation from a ten-year flood by 2100, according to their study.

Before you think "2100 is a fake year and I'll be dead by then," the report also states that thousands of Florida homes — valued at a combined $3.38 billion — were built in zones at risk for inundation by 2050, only 30 years from now. 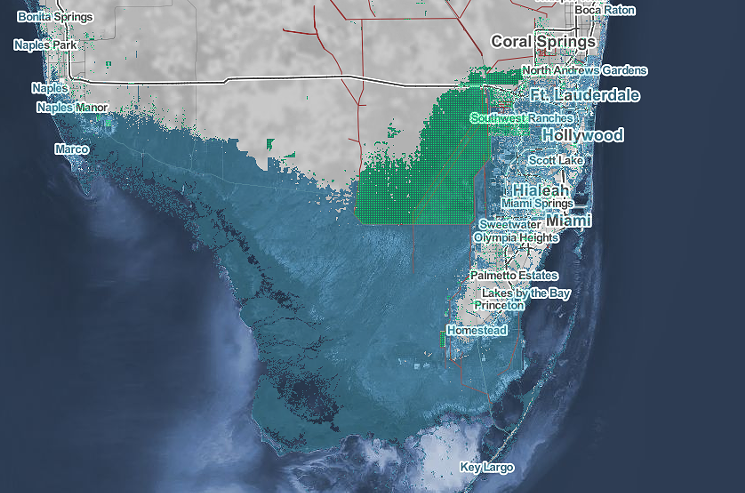 By 2100, with unchecked carbon emissions, Climate Central and Zillow project that billions of dollars' worth of homes will be underwater or at high risk for major inundation.
Screenshot from Surging Seas map courtesy of Climate Central
An interactive map by Zillow and Climate Central allows users to set projections for 2050 and 2100 based on data if carbon emissions (a major contributor to sea-level rise) are deeply cut, moderately cut, or left unchecked. Needless to say, if left unchecked, the majority of South Florida looks like waterfront property.

Young says Zillow itself has no political agenda with the report, but rather created it to give customers a better idea of the risks they're taking when buying property in Florida while sea levels continue to rise as a result of pollution.

"2050 is only 30 years away, which is about the amount of time that's on a mortgage if you bought a house today," Young says. "We want our customers to be aware of this."
KEEP MIAMI NEW TIMES FREE... Since we started Miami New Times, it has been defined as the free, independent voice of Miami, and we'd like to keep it that way. With local media under siege, it's more important than ever for us to rally support behind funding our local journalism. You can help by participating in our "I Support" program, allowing us to keep offering readers access to our incisive coverage of local news, food and culture with no paywalls.
Make a one-time donation today for as little as $1.