More Ultra Attendees Do Cocaine Than Any Other Festivalgoers, New Study Shows 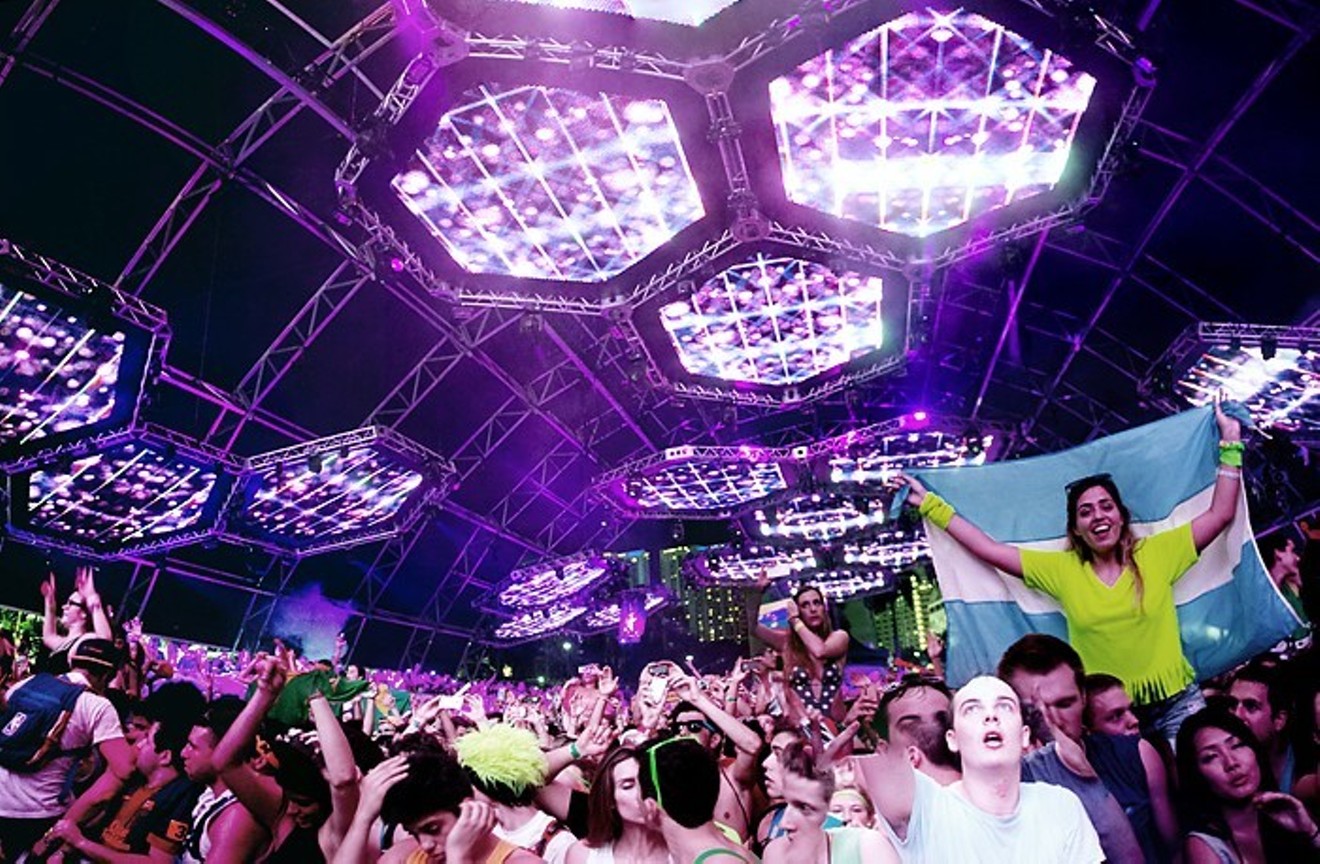 Turns out cocaine is popular in Miami. Who knew? Photo by George Martinez
Festivals draw droves of music lovers to parks and fairgrounds across the nation for a variety of reasons: the hours of live music, the feeling of community, the outdoor ambiance. And, yeah, some revelers show up to get high with the beats.

But what exactly will the more hard-core attendees be smoking, snorting, or swallowing as they make their way toward the main stage to look at the pretty lights and melt into the music? That's exactly what a new study from TickPick, an online ticket marketplace, tried to figure out by quizzing more than 1,000 attendees from festivals across the nation about the mind-altering substances they chose to accompany their musical adventures.

Attendees at Ultra Music Festival, Miami's giant celebration of all things EDM, landed among the top three slots in four of the nine substances that TickPick asked attendees about using. And what drug did Miami bring to the party more than anyone else around the country? Of course you know the answer. It's cocaine.

Of attendees at the ten major festivals that TickPick sampled, more of Ultra's guests said they did blow than the guests at any other festival. In all, 10.6 percent of the Ultra attendees who responded to the survey said they had done coke at the festival. (A spokesperson from Ultra declined to comment about the survey.)

That's about a percentage point higher than the results from Electric Daisy Carnival partiers, who ranked second for cocaine use. Overall, only 7.3 percent of the 1,000 people surveyed reported doing coke.

Those results aren't scientific because respondents chose whether to share their drug-using preferences with the site. But TickPick says it thinks the survey offers festival planners and future attendees a hint of what kinds of drugs they might find at a show.

"We want our buyers to be as informed as possible about the events they wish to attend," says Paul Jones, TickPick’s head of business development. "Collecting information from actual festival attendees allowed us to garner compelling insights on festival drug usage for our customers as they plan their summer festival schedules. The results were revealing and highlight not just the top festivals for each drug, but also the top drugs used at each festival."

The survey's overall findings probably aren't shocking. The most popular substance at all of the festivals was alcohol, which 75 percent of those surveyed had used, followed by 38 percent who smoked weed and 13 percent who took Ecstasy.

As for Ultra, the festival ranked third in alcohol consumption, with 74.3 percent of visitors reporting drinking at the fest (trailing only South by Southwest and Bonnaroo) and third in opioid use, although only 3.5 percent of Ultra guests said they'd dipped their toes into that dangerous water. (Burning Man topped that dubious category, with 4.5 percent saying they'd used opioids, and 3.8 percent of Electric Daisy Carnival visitors reported doing so.)

So why did more Ultra attendees lean toward cocaine than other concert fans across the nation?

The findings "may result from a mix of EDM culture and the festival’s location," TickPick writes. "Ultra takes place in Miami, a location with deep historical roots for the drug and a recent resurgence in trafficking."

Ultra's fans, however, were upstaged in the drug that's arguably most linked to EDM. Though the survey shows 17.7 percent of Ultra-goers had used molly, more Electric Daisy Carnival (26.4 percent) and Burning Man (17.9 percent) visitors told the site they were rolling at those fests.

The data is notable for another reason: Even at Ultra, the survey suggests drug users are firmly in the minority. So it's well past time to stop assuming everyone attending Ultra is getting high on more than just the natural adrenaline of waiting for the drop.