Javier Ortiz / Instagram
Despite New Times basically devoting an entire beat to Miami Police Capt. Javier Ortiz's shameful exploits over the last decade, he's only managed to fail upward, ascending the ranks from lieutenant last year. While he's technically stepped "down" from running Miami's Fraternal Order of Police union, he remains the union's vice-president while his self-professed "best friend" Edward Lugo, a man who nearly got fired for getting tangled up in an FBI smuggling probe, is technically in charge.

So what's Ortiz been up to in the meantime? How about taking some extremely tasteless, smiling selfies while standing next to handcuffed arrestees sitting on the ground? And taking selfies on duty while wearing someone else's name on his uniform.

Spokespeople for the police department said they could not immediately respond as to whether either action breaks MPD policy. 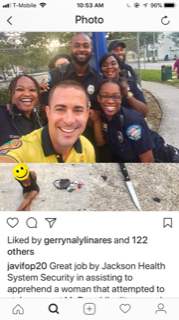 Javier Ortiz / Instagram
In two private Instagram collages posted recently, Ortiz published images of himself smiling with fellow cops as handcuffed suspects sat detained on the sidewalk behind him. In one instance, Ortiz posed with police officers in Overtown, while in the second shot, he stood in front of a woman who'd been arrested outside a Jackson Memorial Hospital building.

Ortiz's entire modus operandi is acting like a brazenly huge asshole. He's been sued multiple times for misconduct, has a lengthy list of use-of-force complaints in his internal affairs file, has been accused several times of fabricating arrest reports, and got pulled from street duty for cyberstalking, harassing, and a private citizen last year. Somehow, he's remained on the force and even has bragged online about his IA record. 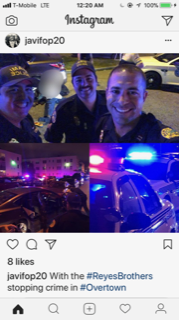 Javier Ortiz / Instagram
MPD's social-media guidelines clearly state that cops can't post about on-duty business without the express authorization of the chief, and it seems unlikely anyone signed off on these Instagram posts. But Ortiz has long been given leeway to do basically whatever he wants online under the guise that he's as a member of the Miami police union, and not an on-duty cop.

But it's clear those lines often blur. Incoming Police Chief Jorge Colina, a man the city has touted as a stand-up, by-the-book policeman, ought to let the public know early where he stands on conduct like this.

Perhaps more interesting, Ortiz also posted a photograph of himself wearing the name tag "Gonzalez," which is, clearly, not his last name. A confidential source emailed New Times and claimed Ortiz "avoids complaints when wearing his uniform. He changes or removes his uniform name tag from Ortiz to Gonzalez." 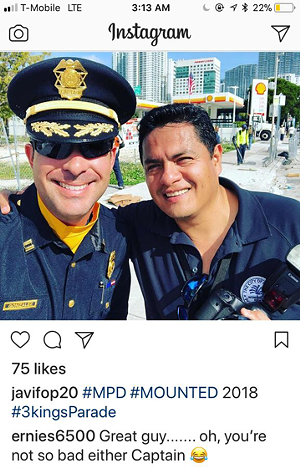 Javier Ortiz / Instagram
Reached via text, Ortiz laughed off the accusation and noted that the name tag in the photo was embroidered onto the shirt, making it difficult to switch. He said instead that there had been a delay in shirt orders at MPD, and he'd been handed the "Gonzalez" shirt to be in proper uniform for that day's event.

"Thanks to the Miami New Times, I don't really need a name tag anyway because everyone knows me!" he texted. "Must be a slow news day!"