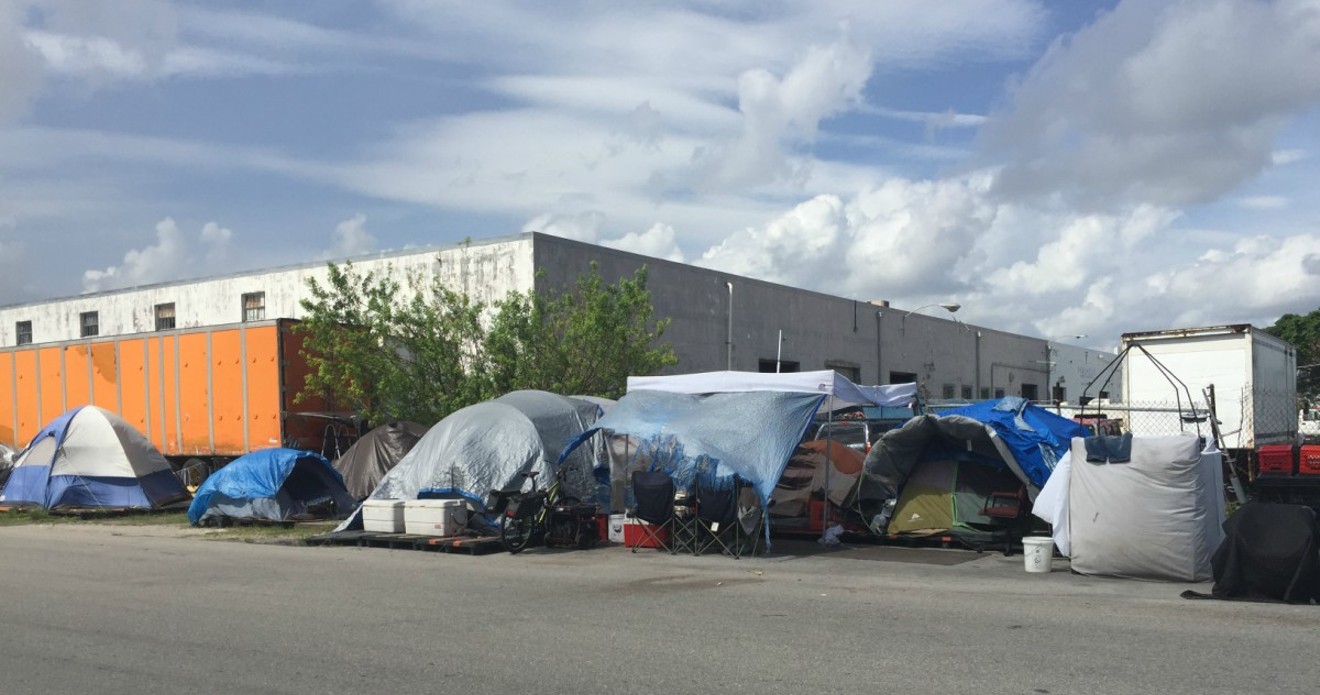 Dozens of sex offenders must leave their new encampment by December 5 or face arrest. Photo by Isabella Gomes
For more than a decade, the sex offenders left homeless by Miami-Dade's prohibitive residency restrictions have settled beneath bridges and highway overpasses, in abandoned lots, and along train tracks. Nobody wants them in their communities, and the sex offenders themselves would rather be anywhere but on the street.

Until now, county officials haven't known what to do about the problem, so they periodically boot the inhabitants and close the camps, only for them to break into smaller clusters and reappear on other street corners. Next month, the sex offenders will be forced to move again, from their current camp on NW 37th Avenue near State Road 112.

Last week, Miami-Dade County issued a cease-and-desist notice prohibiting the sex-offender colony from continued use of the property. The Florida Department of Health declared the camp a "sanitary nuisance," according to the notice. Dozens of offenders must leave the encampment by December 5 or face arrest.

"These people are just trying to survive, and we keep moving them around for really no good reason," says Gail Colletta, president of the Florida Action Committee, an advocacy organization that works to reform sex-offender legislation. "It's all about punishment and a NIMBY mentality. These are human beings being treated worse than stray animals."

A county ordinance prohibits certain sex offenders from living anywhere within 2,500 feet of a school, park, or daycare, more than double the buffer zone prescribed by state law. When you factor in the county's lack of affordable housing, prohibitions on property owners renting to certain offenders or predators, and employers unwilling to hire them, it's almost impossible for a sex offender to live anywhere that's not a vacant lot.

"They live in squalor," says Frank Diaz, a pastor who ministers to the sex offenders through his nonprofit, United We All Can. "They live in filth, can't take a bath, and can't go to the bathroom."

Living with friends or family willing to house them might not be an option either if they live too close to a school or park. And registered sex offenders aren't allowed in homeless shelters.

"What happens is they find little nooks and crannies where they can hide so they're not visible and nearby businesses don't complain," Diaz tells New Times.

But if those nooks and crannies happen to be on county property anywhere in Miami-Dade, offenders can be arrested for camping out overnight.

Jeffrey Hearne, a Legal Services of Greater Miami attorney who, along with the American Civil Liberties Union of Florida, sued the county to try to block the closure of a previous encampment near Hialeah, says the anti-camping ordinance is tantamount to criminalizing homelessness. The offenders are stuck in a 14-year cycle that's bound to continue repeating.

"They're constantly being kicked around," Hearne says.

Critics have long said the county's approach to addressing the sex-offender housing problem is backward and threatens public safety. A lack of access to stable housing, social services, medication, and adequate support systems are destabilizing forces for offenders, particularly the ones who are high-risk and prone to reoffending, they say.

Jill Levenson, a Barry University professor and expert on treatment and policy for sex offenders, says there's no evidence that housing restrictions imposed on registered sex offenders are effective in protecting children and that many offenders are at very low risk of reoffending.

"People don't abuse children because they live near a school," Levenson tells New Times. "They abuse children when they're able to build trust and familiarity with them."

Offenders who were convicted before 2005, when the Florida Legislature passed the law implementing residency restrictions, can live closer to schools and parks. Levenson suggests that the county study the offenders living close to schools and whether they ever reoffended.

"They'll find very few if any who have, I’m certain," she says. "They would find there's no pattern of association between these two things."

Diaz, the pastor, says he's petitioning the county for property in an industrial area that can house the transient offenders. He's been working with lobbyist Ron Book, who chairs the county Homeless Trust, on a potential housing solution.

Book says he's not ready to share too many details about the housing plan, but he thinks he can secure a building in an unincorporated area of the county within a few months and then "move in an aggressive direction to get it ready for occupancy."

Book has previously said he didn't want sex offenders in Homeless Trust programs but that services have always been available to them in the form of identifying housing opportunities, providing temporary rental assistance, and case management.

"If they don't want to pursue housing opportunities, like any other chronically homeless individual in our streets, I can't force them to be somewhere," Book says. "If they choose to remain on the streets, our advice to them is don't build a colony. You create another health nuisance, and all of that costs money we don't have available for other homeless-related persons."

Diaz acknowledges the sensitivity of issues related to sex offenders and says he understands that not a lot of people want to assume responsibilities for them. But he believes someone must.

"We want to be part of the solution," Diaz says. "No one wants them. We'll help them."

Otherwise, he says, they'll just continue getting swept around the county.

"And there's a lot of them under that rug," Diaz says.
KEEP MIAMI NEW TIMES FREE... Since we started Miami New Times, it has been defined as the free, independent voice of Miami, and we'd like to keep it that way. With local media under siege, it's more important than ever for us to rally support behind funding our local journalism. You can help by participating in our "I Support" program, allowing us to keep offering readers access to our incisive coverage of local news, food and culture with no paywalls.
Make a one-time donation today for as little as $1.