A spring breaker in repose, ten minutes before his face will be covered in phallic Sharpie markings. Photo by Logan Fazio
Miami's spring break 2017 was one for the books. It began with a bikini-clad tourist twerking on a cop, continued with a gravity-defying feat of twerking atop a car on the MacArthur Causeway, and ended with a clubgoer twerking on the bumper of a car stopped in traffic near Ocean Drive after last call. Not to be outdone, the drivers of a BMW and a Mercedes-Benz got into a bizarre hit-and-run in South Beach, and a weirdo with a snake caused a crowd to stampede.

Spring break in Miami Beach is strange and drunk and, quite often, not great for anyone's health. But a new survey shows just how crazy some spring breakers get when they come to party in the Sunshine State. Stats collected from nearly 900 students and released this week show that 9 percent of Miami Beach's spring breakers got alcohol poisoning at some point during their trip, while 6 percent of them ran afoul of the law.

The survey comes from Project Know, an online substance abuse resource that has studied risky behaviors in spring breakers. There are some limitations to the data: Though Miami Beach was one of the poll's top spring break destinations, obviously not all of the high-school and college students surveyed had traveled to South Florida. Survey takers were asked about their drinking, drug use, and sexual behavior over spring break for the past five years.

Even if taken anecdotally, though, the numbers paint a picture of the debaucherous and sometimes dangerous modern spring break. The top three cities for alcohol poisoning — Tampa, Daytona Beach, and Miami Beach — are in Florida. 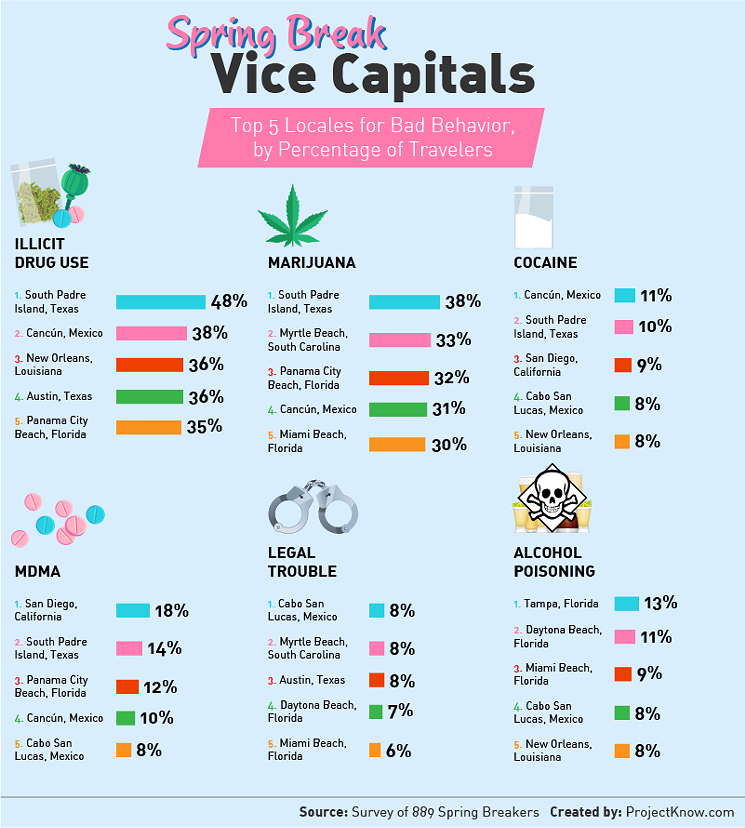 Courtesy of Project Know
Somehow Miami Beach failed to make the list for use of cocaine or molly, although almost a third of spring breakers who came here said they smoked weed during their vacation. Because police banned booze and coolers from the beach this year, it's possible more people found it easier to get high before going to the beach rather than trying to maintain their beer buzz.

On the bright side, few of them were arrested: Only 6 percent said their spring break ended with police lights.