The old Miami Herald headquarters was demolished in 2015. Phillip Pessar / Flickr
Last Friday, the McClatchy Newspaper Company — which owns the Sacramento Bee, Kansas City Star, Bradenton Herald, Charlotte Observer, the flagship Miami Herald, and other major dailies — announced plans to gut its reporting staff. In an internal email from CEO Craig Forman, the company announced a whopping 450 employees at the company's 29 newspapers would be offered voluntary, "early retirement" buyouts to "help us get to faster in a digital company that will be smaller for the foreseeable future." As most journalists have learned by now, so-called voluntary buyouts typically precede mandatory layoffs.

But while the news is soul-numbing for reporters, life is still apparently pretty good for Forman and the rest of the newspaper chain's corporate board.

How good? Forman received a $900,000 bonus in 2017, according to the most recent publicly available salary information, which McClatchy submitted to the Securities and Exchange Commission in April 2018. That money came on top of the $823,846 base salary he received and the $552,684 he earned in stock awards. All told, Foreman — a former Wall Street Journal news editor who later became a Silicon Valley corporate executive — received $2.4 million in compensation in 2017.

Forman's bonus alone could have paid the salaries of 22 reporters making $40,000 per year.

(Even more infuriatingly, the Columbia Journalism Review found after this story was initially published that Forman's latest contract, signed January 25, 2019, includes a base pay of $1 million, another $1 million bonus, and a truly stunning $35,000-per-month "housing stipend." Many entry-level reporting salaries begin at $35,000 per year.)

The company's most recent SEC filings show the company's five-person corporate board ate well all year while its employees were getting laid off. In terms of pure, base-level salary, the company paid $2.8 million to just five corporate executives in 2017. Foreman's bonus brought that amount to $3.7 million.

The grand total paid to five executives and two departing ones? A full $9.6 million in combined salaries, stock awards, bonuses, and all other compensation — to just seven people. 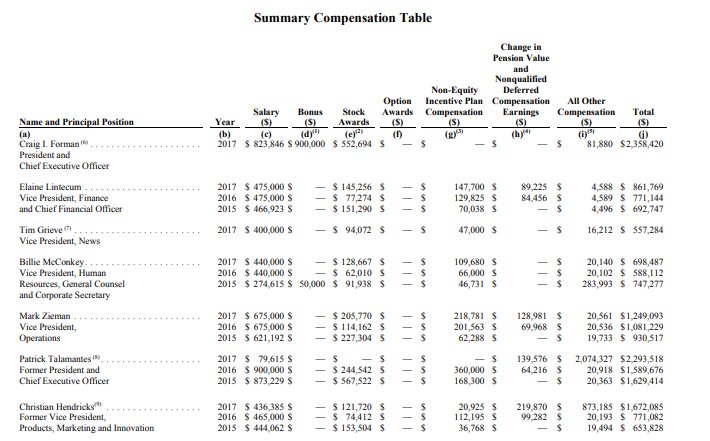 SEC
The data was disclosed in McClatchy's annual proxy statement to investors. The company is scheduled to disclose its 2018 data in just two months. For now, last year's proxy statement is the most recent salary information available. A McClatchy press spokesperson said she could not immediately comment.

But it's not like things were going well in 2017. The company lost $332 million that year and owed nearly a quarter-billion dollars in long-term debt. (Much of that debt was left over from the company's purchase of the competing Knight Ridder newspaper chain in 2006.) McClatchy also slashed jobs that year too: According to Poynter, McClatchy cut jobs at the Fresno Bee and Tacoma News Tribune that year. In August 2018, the company cut 140 employees — roughly 3.5 percent of its staff.

McClatchy spokeswoman Jeanne Segal points out that Forman, who has been with the company for two years, stepped in with the same salary as his predecessor. In 2017, seven leading executives including Forman turned down programmed bonuses. Among Forman's many accomplishments, she adds, he has renegotiated debt the company took on after its 2006 purchase of Knight Ridder, which previously owned the Herald and other papers now in the McClatchy chain.

In 2018, as part of cost savings across the company, senior leaders took unpaid furloughs, she added. Forman took two weeks. He also agreed to a freeze of his base pay and level for the term of his new two-year contract, effective through 2020 while reintroducing a 401(k) partial match and small merit pay increases.

But McClatchy's buyout offer arrived during a heartbreaking two weeks for the newspaper industry. Within just 30 days, the news industry announced it was shedding more than 2,000 jobs, including 200 at BuzzFeed, 800 at Verizon-owned outlets such as HuffPost and Yahoo, 400 at Gannett newspapers, and 250 at Vice. Critics have correctly pointed out that wealthy CEOs and venture capitalists appear to be the cause of the layoffs in most cases.

BuzzFeed, for example, generated more than $300 million in revenue in 2018, a 15 percent increase from the previous year. The company still cut 15 percent of its workforce — including many seasoned investigative reporters, award-winning national-affairs journalists, and a few writers who shaped the face of web-first journalism. Vice News, the web-first news outlet for millennials that was rocked last year by sexual-harassment scandals, cut some similarly decorated journalists at the end of January.

The layoffs at Yahoo and HuffPost were even more outrageous. Both outlets are owned by the behemoth Verizon Communications, which posted a $15 billion net profit in 2018 — less than its $30 billion in 2017 but still a sizable amount.

McClatchy executive salaries are comparable to those of other major newspaper chains' head honchos. Gannett CEO Robert J. Dickey earned $967,308 in base salary in 2017. (Gannett seems to love showering executives with stock options and "incentive" bonuses: Dickey earned nearly $8 million in total compensation in 2017.) Executives at the Tribune chain appeared to earn roughly similar salaries too: Then-Tribune CEO Justin Dearborn earned a $611,539 base salary in 2017. (Segal says the compensation of the entire McClatchy executive team remains more than 10 percent below the median in the industry.)

According to the staff-wide email New Times obtained, McClatchy's latest round of buyouts is expected to touch every wing of the company. Employees have until February 19 to take the offer.

"This will be a one-time opportunity; we do not anticipate another voluntary early retirement program," Forman wrote to employees last week. Yesterday, Washington Post media columnist Erik Wemple warned the buyouts could claim the Herald's Carol Rosenberg, the only full-time reporter covering the U.S. military's prison camp in Guantánamo Bay, Cuba — a facility where detainees have been held without trial and tortured. Rosenberg has spent much of the past 17 years reporting from a small tent on the prison grounds.

Spokeswoman Segal says the buyouts will help McClatchy reach future success. "The company is well positioned to become a digital enterprise and deliver independent journalism," she adds, "because that is what it is all about."

Correction: An earlier version of the story misreported a proposed purchase by Digital First. It was Gannett, not McClatchy, that the company intended to buy.
KEEP MIAMI NEW TIMES FREE... Since we started Miami New Times, it has been defined as the free, independent voice of Miami, and we'd like to keep it that way. With local media under siege, it's more important than ever for us to rally support behind funding our local journalism. You can help by participating in our "I Support" program, allowing us to keep offering readers access to our incisive coverage of local news, food and culture with no paywalls.
Make a one-time donation today for as little as $1.