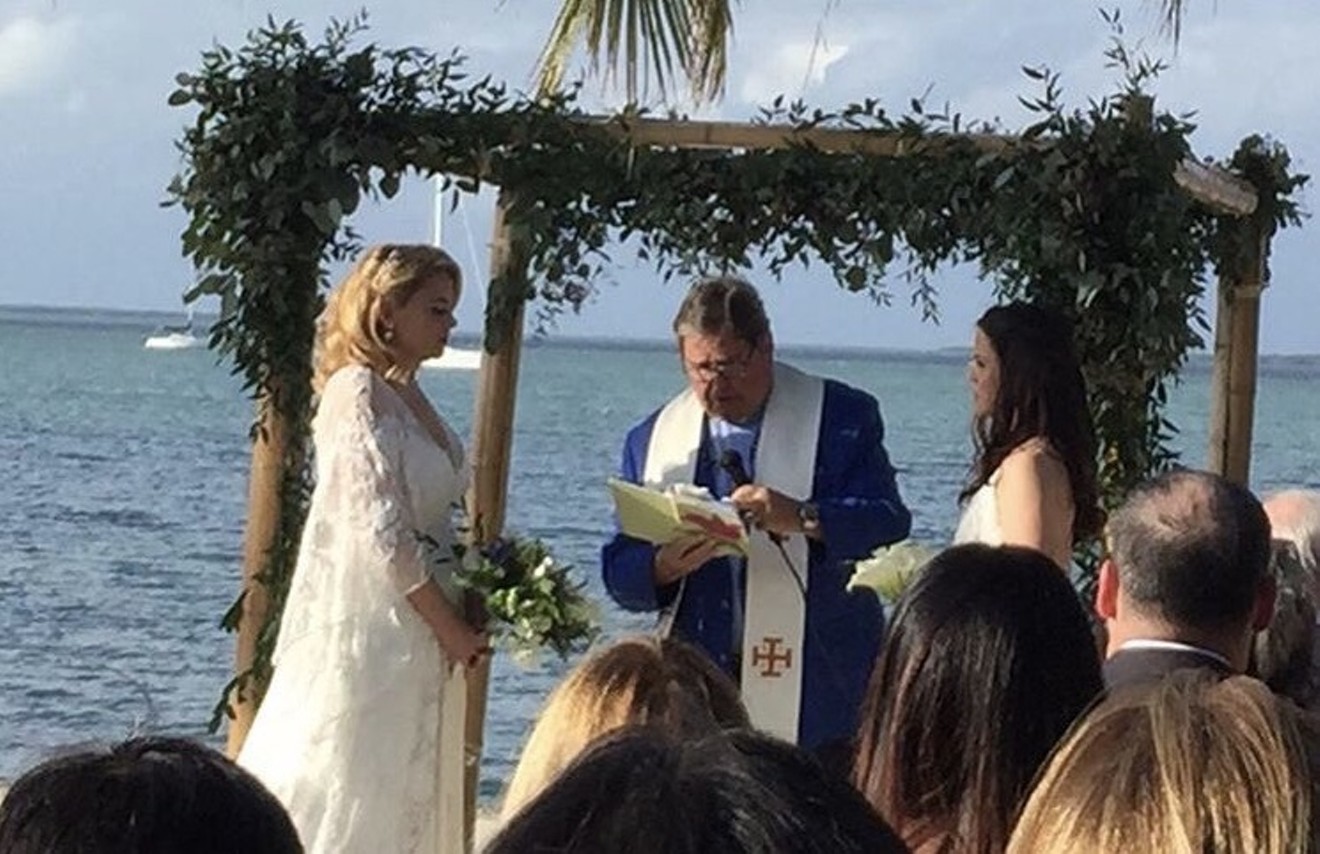 Courtesy of Billy Corben
Miami resident Jocelyn Morffi married her longtime partner, Natasha Hass, at a sun-lit outdoor ceremony at the Key Largo Lighthouse Saturday, February 3. By the end of the week, Morffi had been fired from her job teaching first grade at Sts. Peter & Paul Catholic School.

Morffi and Hass were not available to comment Friday. (Neither was a legal advocate.) But a source close to the family told New Times that when the school discovered Morffi had married another woman, the administration "asked" the teacher to resign. She refused, so she was fired.

The source provided a letter the school sent to concerned parents Thursday in which administrators confirmed Morffi was fired after seven years, but did not say why. The school is located on SW 12th Avenue between Little Havana and Coral Gables.

"Today a difficult and necessary decision has been made regarding Ms. Jocelyn Morffi, our first-grade teacher," the letter reads. "She is no longer teaching at our school."

In 2015, the Miami Herald wrote a glowing profile about Morffi, after she started a program called #teachHope70x7 that encouraged kids to feed the homeless and "encourage hope" in the community. (The "70x7" references a bible passage about forgiveness.)

A spokesperson for the Archdiocese of Miami did not respond to multiple messages from New Times today. But Florida remains one of the few states where employers can still fire someone based on sexual orientation or gender identity. Despite constant complaints and protests from LGBTQ activists, state lawmakers have refused to pass laws protecting employees from getting fired for coming out. The issue is even affecting state business: National LGBTQ groups are asking Amazon.com to avoid building its new headquarters in Florida because the state does not protect LGBTQ employees.

Miami's current archbishop, Thomas Wenski, has a long history of anti-gay comments. When the U.S. Supreme Court legalized same-sex marriage nationwide in 2015, Wenski released a statement comparing the ruling to the 1857 Dred Scott case, which stated black people could be legally owned as property in the United States.

"This decision redefining marriage will also bring bad consequences," the archbishop wrote. "Losing the understanding of marriage in our culture as a conjugal union of a man and a woman in a permanent and exclusive commitment conducive to welcoming and raising the children born from such a union weakens the family as the basic cell of society; and it imperils the human flourishing of future generations."

The source close to Morffi said that even parents of students at the school are upset about her termination and say Morffi was well liked among students. Miami filmmaker Billy Corben attended the wedding and tweeted a photo of the two women exchanging vows. Then he slammed the school for forcing Morffi out of her job days later.


My beautiful friends Natasha and Jocelyn were married in Key Largo last weekend. Yesterday, Jocelyn was fired by @sppslife, where she worked as a 1st grade teacher for 7 years, for marrying a woman. pic.twitter.com/TkN10M6Nyp

"My beautiful friends Natasha and Jocelyn were married in Key Largo last weekend," he wrote. "Yesterday, Jocelyn was fired by [Sts. Peter & Paul], where she worked as a 1st grade teacher for 7 years, for marrying a woman."

Here's the letter in full: