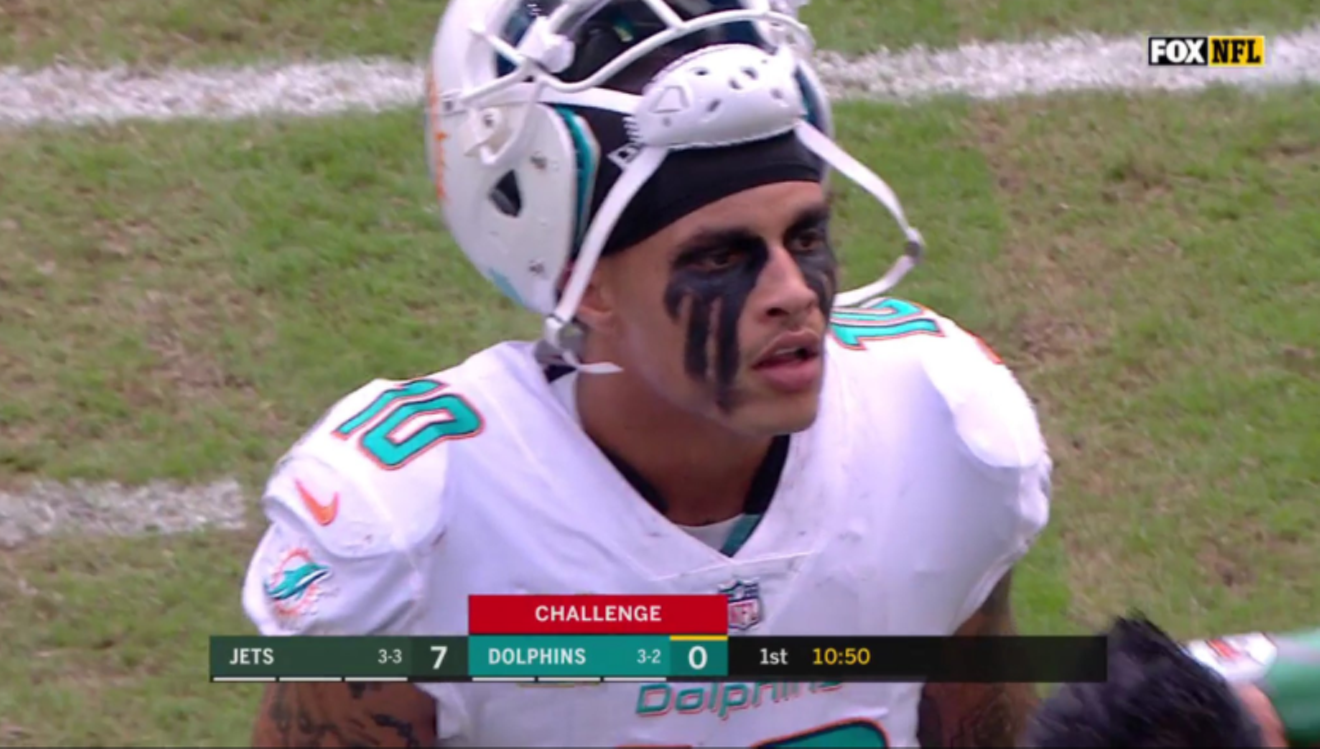 screengrab via FOX NFL
Early in the first quarter of the Dolphins' 31-28 comeback win over the Jets, Kenny Stills punched his ticket to the ESPYs with one of the most spectacular catches you'll ever see. At first, the pass was ruled incomplete, but while the officials were watching the video that proved otherwise, Stills was busy making more headlines as he took off his helmet to unveil a Mad Max look.

While the Fins were trailing 7-0 early, Jay Cutler cocked and unloaded a bomb to the end zone in the direction of a blanketed Stills. He and the Jets defender both went up for the jump ball. What followed was im.


So this happened. What a grab by Kenny Stills!!! pic.twitter.com/5gMc2Fy9vL

Stills' ridiculous 36-yard catch was ruled a completion upon review and eventually set up the Dolphins' first score, a Cutler four-yard touchdown pass to Jarvis Landry that tied the game at 7.

While officials were on the sidelines determining they had erroneously called the catch of the year an incompletion, Stills removed his helmet and gave everyone a glimpse of his extraordinary eyeblack.


Kenny stills just simultaneously made the catch of the year, and haunted the dreams of children everywhere. pic.twitter.com/DyywizqkGy

Shout out to Kenny Stills for killing the Black Swan look. pic.twitter.com/f6kpEGymr2

Kenny Stills looking like character in a football movie where producers fail to secure team and logo rights. pic.twitter.com/4OKOhuvSts

Kenny Stills looking like a grounder from The 100 pic.twitter.com/YIinTPMA4G

OHHHHHHHHHHH WHAT A RUSH pic.twitter.com/lGPZze6hW3

Stills' amazing day began with catching passes from Cutler but ended by hauling in a pair of touchdown passes from backup quarterback Matt Moore. After Cutler injured his chest, Moore entered the game and promptly led the Dolphins to 17 unanswered points and a 31-28 win. All of those chants in the past few weeks to dump Cutler and bring in Moore finally paid off. And the longtime backup didn't blow his chance.

Even if Cutler is healthy this week — and that's a huge if — you can bet a vocal majority of fans will clamor for the Fins to start Moore. Either way, Stills will be there to catch the pass.