The group wrote that "Anti-FA and Black Matter protesters were given free reign to attack permitted protesters of the City of Charlottesville's decision to take down a memorial to American hero, Robert E. Lee." Save Southern Heritage operates chapters in multiple states, and one member who lives in Virginia said on Facebook that he attended the "United the Right" rally over the weekend.

Despite the obvious racism and tacit support for violence by the group online, Florida state Sen. Dennis Baxley — who tried to block a monument to the victims of slavery in Florida earlier this year — is scheduled to appear at a Save Southern Heritage Florida banquet in Temple Terrace, Florida, September 2. Baxley is scheduled to participate in a panel discussion about the alleged "War on the South" alongside Orlando-area radio host Doug Guetzloe and black Confederate flag supporter H.K. Edgerton. Tickets cost $29.50 and include a three-course fried chicken, salmon, and pasta dinner.

Reached by phone, Baxley confirmed he will indeed attend the banquet but said he'll speak to "condemn racism, bigotry, and violence." Hoever, he said that he does not believe Confederate monuments should be taken down and that removing Confederate iconography is actually what triggers racist violence.

His comments echo almost word-for-word the deeply offensive, white-nationalist-apologizing speech Donald Trump gave during a news conference yesterday at Trump Tower. Notably, Baxley spoke to New Times before the president made his unscheduled remarks, which have been roundly condemned by both parties.

"We place monuments with an expectation of ," Baxley said. "Taking them down is triggering something not healthy for us as a people."

What would Baxley say to people, particularly African-Americans, who are offended that the monuments valorize a group that fought to keep black Americans enslaved? "I'm not going to relitigate that," he said.

The state senator then said he would feel the same if "someone defaced a monument of Martin Luther King Jr."

How exactly can Baxley equate the legacies of the nation's most famous civil rights leader with a group that took up arms against the government to keep black people in chains? Again, Baxley insisted he was "not relitigating what either of those things for."

Baxley is a Republican who represents Central Florida, including portions of Lake, Sumter, and Marion Counties northwest of Orlando. His offices are located in Ocala, where he was born and raised. He served in the Florida House of Representatives from 2000 to 2016 before winning a bid for state senate last October.

This is not Baxley's first Confederate-related controversy. In April, the state's legislative black caucus said it was furious with Baxley after he fought to build a monument to the victims of slavery in Florida. He claimed he did not want to "celebrate defeat." Baxley's opposition killed the bill, and state Rep. Kionne McGhee later told the Miami Herald that Baxley's decision "can easily be taken as an insult." 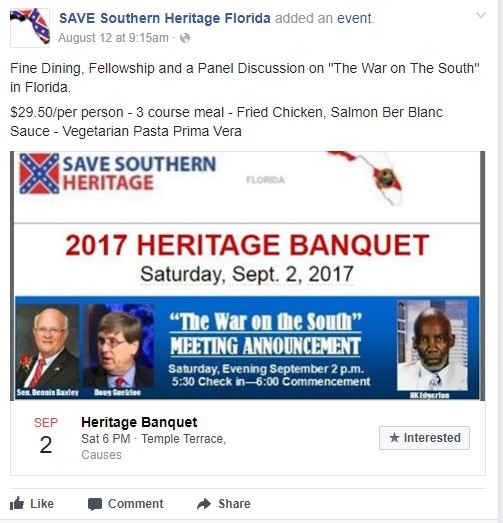 via Facebook
Baxley's decision to attend a Save Southern Heritage banquet is equally suspect. The association has mounted campaigns across Florida to try to ensure that monuments to the Confederacy aren't removed. Save Southern Heritage launched PR campaigns while Tampa debated removing a Confederate statue, and Hollywood is facing pressure to change three street signs named for Confederate generals. One of those generals, Nathan Bedford Forrest, was also the first grand wizard of the Ku Klux Klan.

Over the past 72 hours, the Florida chapter of Save Southern Heritage has shared multiple posts from a Virginia member who attended the Unite the Right rally in Charlottesville. Those posts have erroneously blamed leftist organizers and Black Lives Matter activists for "causing" violence in Virginia and said the unrest was also Charlottesville Mayor Michael Signer's  because he had decided to take down a statue of Robert E. Lee.

At one point, the group shared a meme incorrectly blaming a member of the group Antifa for driving a car into a crowd of anti-racist protesters. The real suspect, 20-year-old James Alex Fields Jr., is a white nationalist and longtime Nazi sympathizer.

A spokesperson for Save Southern Heritage Florida, David McCallister, said via phone that the group "asks a lot of people, people from all points of view" to attend its events. (He later argued the Civil War was not fought over slavery. It was, and here's the link to South Carolina's declaration of secession that proves it.) 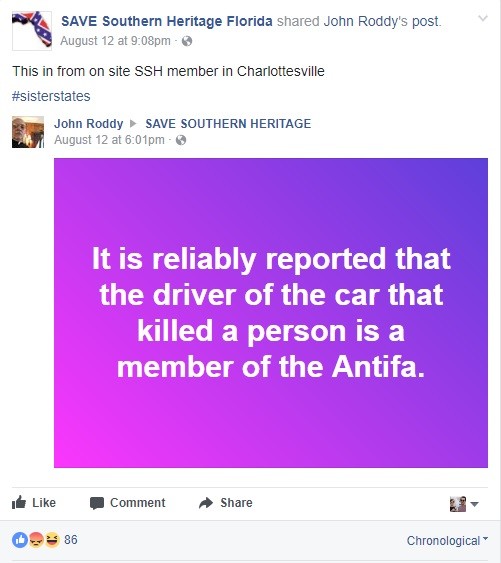 via Facebook
Baxley's both-sides-ism about Charlottesville echoes the dangerous statement Trump gave Saturday evening after civil rights activist Heather Heyer was murdered in the car attack. Trump was criticized all over the world for blaming "both sides" for the violence when in fact the civil rights organizers attended to denounce Nazism and white supremacy, and the perpetrator of the car attack was an avowed white nationalist. After backtracking Monday on his "many sides" statement, Trump then backtracked yet again yesterday in a disturbing news conference, blaming "both sides."

Baxley's statement was similar in tone to Trump's. The senator said that he "condemns bigotry, condemns violence" and that slavery was a "curse on this country and absolutely horrible." But he claimed there are "anarchists in the country who want us to have a battle" and also blamed the "alt-left" for wanting to "attack police" and "advocating killing other people." (This is not a position of any major leftist organizations.)

Baxley failed, however, to note that antifascist protesters arrived at the event to stand against actual Nazis and Klansmen, while the "other side" gathered to celebrate the ideas of mass genocide and ethnic cleansing. The two camps aren't equal. An NPR fact-check from June noted that violence committed by white supremacists over the past 16 years eclipses violence committed by any other group in the nation and that the property damage and rock throwing that leftists have sometimes engaged in is not remotely similar in size or scope.

That did not stop Baxley from equating the two, or from refusing to acknowledge the racist history of the Confederacy — or why many Floridians would be offended that a sitting lawmaker is attending a Save Southern Heritage meeting.

"What has happened here, and I don’t any of the media covering it, is that we had two extreme groups, and alt-left, who met in Charlottesville to have a war," Baxley said. "What was the trigger? The trigger is the desecration of historic monuments."