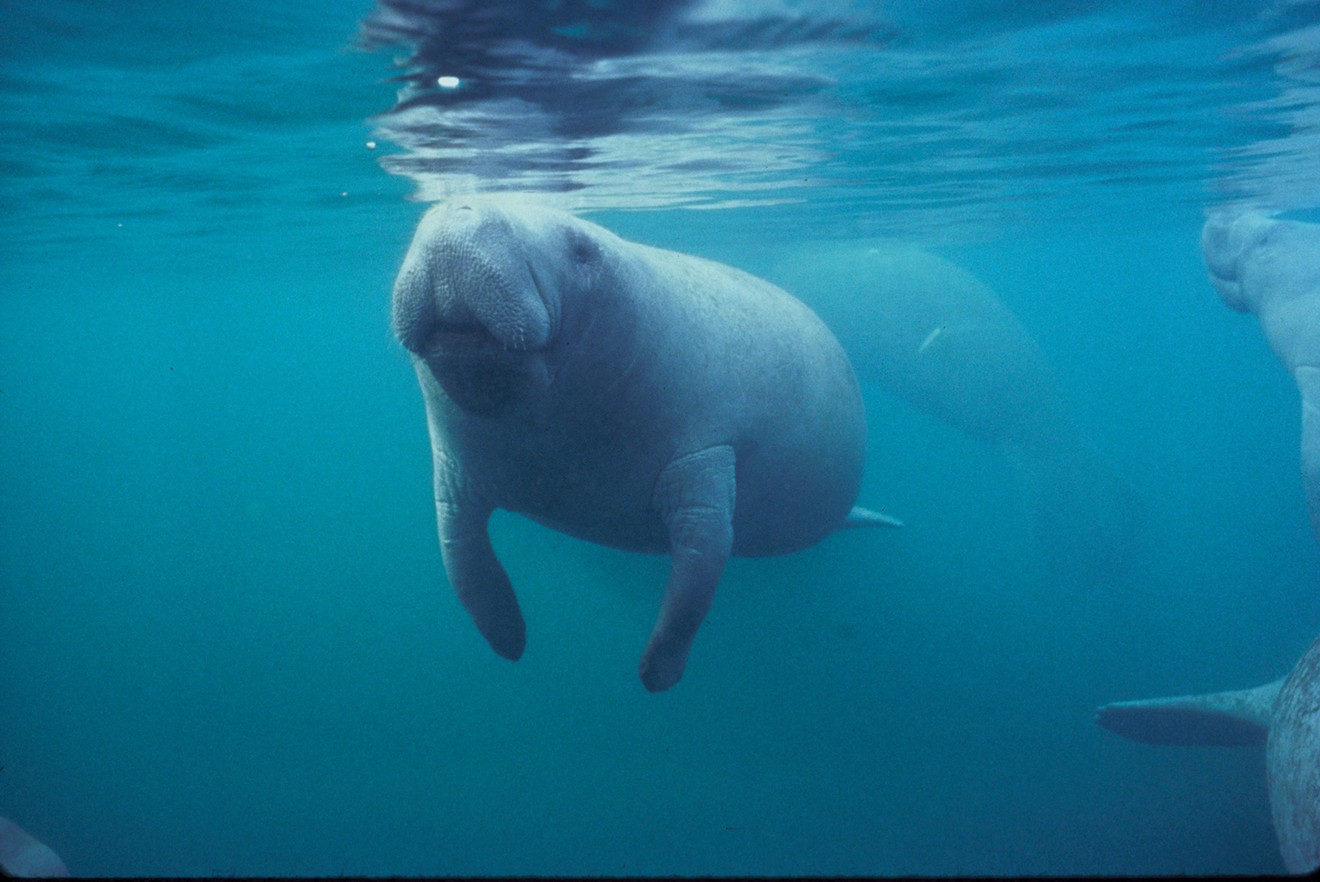 Records numbers of manatees are dying of starvation from seagrass die-off and red tide brevotoxin poisoning. Photo by U.S. Fish and Wildlife Service Southeast Region/Flickr
Nature is certainly not healing — at least not in Florida, where manatees are dying at unusual and alarming rates. This month, the Florida Fish and Wildlife Commission (FWC) reported 866 manatee deaths so far in 2021 — the highest death toll ever recorded in a single year.

And it's only July.

"This is an unprecedented level of mortality," says Patrick Rose, an aquatic biologist and executive director of Save the Manatee Club. "This year alone, we have lost a number equal to 10 percent of the population. This can't happen again."

"That's a sobering number," he says. "That's somewhere between 15 to 20 percent of the total east coast population."

Manatees were one of the 78 original species listed as "threatened with extinction" under the Endangered Species Act, which was revised in 1973 to strengthen federal manatee protections. Federal and state officials have been documenting the species' mortality since 1974.

Rose, whose work with manatees goes back 50 years, was the first federal manatee-recovery coordinator for the U.S. Fish and Wildlife Service. Back then, he says, the biggest concern for manatees was hunting, which was swiftly outlawed under the federal Endangered Species Act and the Marine Mammal Protection Act, as well as the state Manatee Sanctuary Act. Those laws also made it illegal to feed, harass, or harm the creatures.

But the threats to the thousand-pound sea cows have changed as Florida's human population rose from 8 million in the 1970s to 21 million today. Watercraft strikes and monofilament and crab-trap entanglements became common. Over time, education and outreach promoted awareness about slow-wake zones and water pollution.

"In 2009, I was probably the most optimistic I have ever been [about manatees' survival]," Rose tells New Times. "We went from a population of somewhere around 1,000 manatees to in the neighborhood of 7,000."

In May 2017, the Florida manatee population grew to a minimum of 7,250, and their status as an endangered species was down-listed from "endangered" to "threatened." Though Rose says the designation didn't inherently limit federal funding for manatee research and conservation, he couldn't help but notice attitudes had changed.

"We had much less funding than we had before," he says. "Now we have two people [working with manatees] on a federal level instead of five."

After the down-listing, the state FWC began handling the bulk of manatee-related research, rescue, and conservation efforts. Though the state's manatee program receives some funding from grants and donations, the vast majority comes from drivers who opt for Save the Manatee license plates. And as more license plate options have come online, fewer Florida drivers are paying to manatee plates, shrinking the revenue payout from the state.

Manatees are vegetarians, and this year's spike in mortality is attributed to the drastic loss of their main source of food: seagrass in the waterways and lagoons, where herds of the warm-blooded creatures spend the winter to avoid cooler temperatures. Rose says there once were 70,00 acres of seagrass across Florida but in the past decade that number has drastically dwindled, especially in popular manatee winter destinations, such as the Indian River Lagoon south of Cape Canaveral and Biscayne Bay off the coast of Miami-Dade.

Rose says at least 300 manatees died from starvation this year, but it's hard to say definitively, because overwhelmed state FWC staff were only able to conduct necropsies for one-fourth of all manatee deaths.

"It could be much more," Rose says. "Just looking at the living manatees, you can see weight loss and from their body conditions you can see that many are suffering."

Save the Manatee Club is a founding member of the Manatee Rescue & Rehabilitation Program, a cooperative of agencies, including the Miami Seaquarium, SeaWorld Orlando, and Zoo Tampa, that provide care to injured manatees. Rose says this partnership has had to expand this year to meet demand. Some rescued manatees are sent as far away as Ohio for treatment.

"One hundred manatees were rescued this year," Rose says. "Not all were due to malnutrition, but a lot of them were."

Now that it's summer, Rose says manatees on Florida's west coast face another threat: neurotoxin poisoning from annual algal blooms known as the red tide. So far, 30 manatees have died from brevotoxin, which if inhaled or consumed by manatees can cause paralysis and convulsions, and, ultimately, drowning.

Prior to 2021, the highest recorded annual manatee mortality was 830 in 2013, when a particularly potent red Ttde was attributed to the deaths of about 300 manatees.

It remains to be seen whether the manatee population will be able to recover if 2021 brings a significant red tide event, which would also contaminate seagrass.

Rose says manatee survival will depend on a drastic increase in seagrass. But replenishing the seagrass will take years, and strict policies will have to be implemented to limit nutrient runoff, such as nitrogen and phosphorous, from farms and wastewater-treatment plants that pollute the water and lead to massive seagrass die-offs.

"It will take a considerable amount of time to fix what's broken," Rose says. "The likelihood of recovering from this kind of large-scale mortality is much more reduced from it was when we started in the '70s."

For the first time, Rose is positing that federal and state laws will have to be amended to allow officials to intervene and feed malnourished manatees. He also believes manatee status should be uplisted from "threatened" to "endangered."

"Or else hundreds more will die this winter," he says. "This is pretty darn bad."

If you see a sick, injured, dead, or tagged manatee, please call FWC’s toll-free Wildlife Alert number, 1-888-404-FWCC (1-888-404-3922) or press #FWC or *FWC on a cellphone.
KEEP MIAMI NEW TIMES FREE... Since we started Miami New Times, it has been defined as the free, independent voice of Miami, and we'd like to keep it that way. With local media under siege, it's more important than ever for us to rally support behind funding our local journalism. You can help by participating in our "I Support" program, allowing us to keep offering readers access to our incisive coverage of local news, food and culture with no paywalls.
Make a one-time donation today for as little as $1.