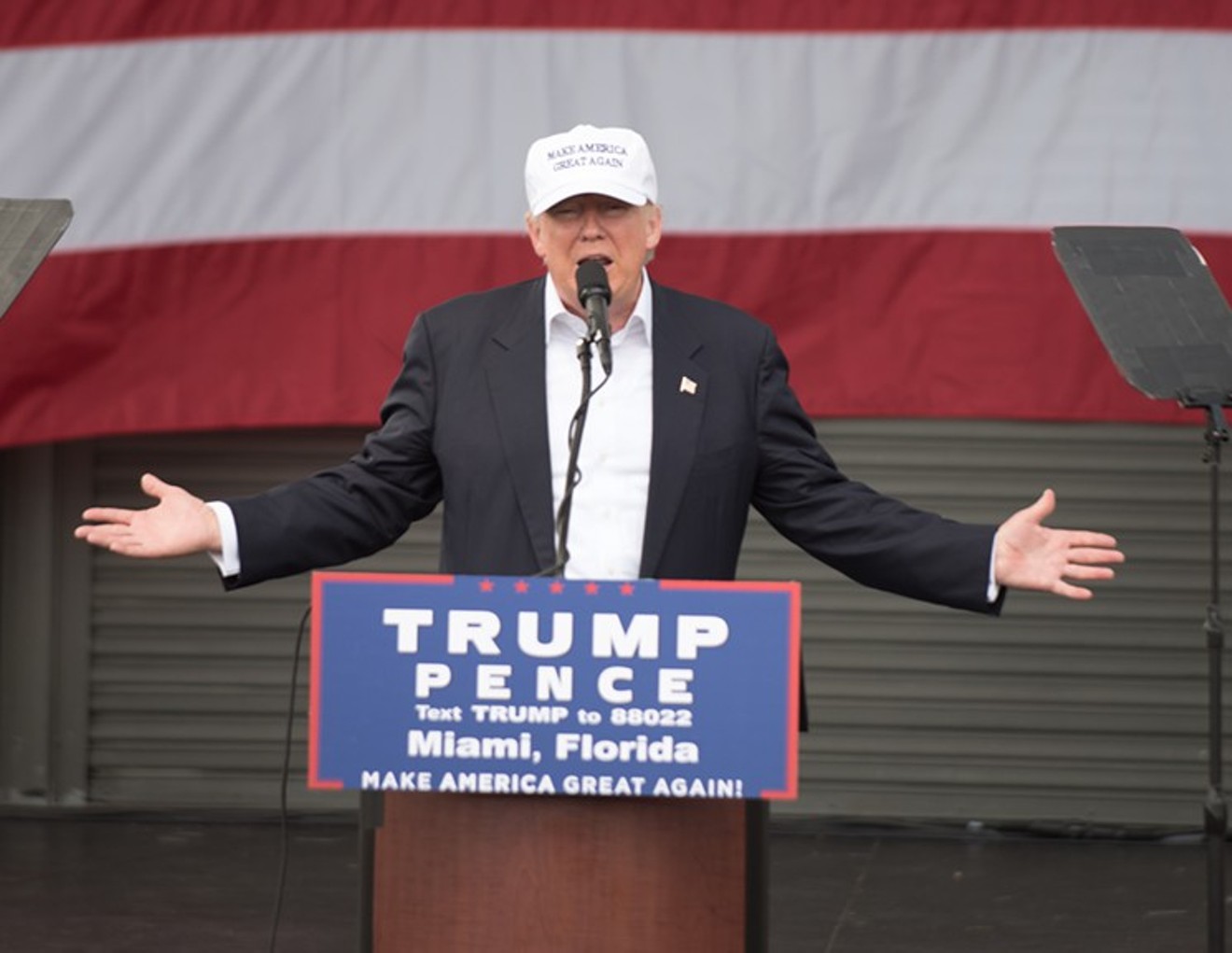 Photo by Michele Eve Sandberg
One of Donald Trump's most enduring, unchallenged fictions is the idea that Cuban-Americans adore him. He repeats the lie all the time. During the election season, Trump flew into Miami, made a pit stop at Versailles, and earned some cheers after promising Cuban immigrants he would crack down on the Castro regime. Ever since that visit, he has claimed he's beloved in Miami's Cuban community.

During yesterday's batshit-crazy news conference, wherein he might have outdone himself with the sheer brazenness of his lies, Trump again said Cuban people love him. But basic voter data flatly contradicts that idea. According to an independent analysis of November's election results, Trump performed worse than any other Republican candidate in history in Miami's majority-Cuban-American neighborhoods.

“Cuba has been very good to me, in the Florida elections, you know, the Cuban people, Americans,” Trump said yesterday. Trump began riffing about Cuba when asked about his dinner two nights ago with his wife Melania and Marco and Jeanette Rubio. The four dinner guests discussed Cuba policy most of the night.

But the idea that the Cuban people have been "very good" to Trump in Florida elections is nonsense. The only Florida county Trump lost in the Republican primary was Cuban-heavy Miami-Dade. And, according to one independent report on the 2016 general election results, Trump received a historically small number of votes in Miami-Dade's Cuban-American neighborhoods.

According to the report — which was compiled in December by Democratic political operative Giancarlo Sopo, along with Florida International University sociology professor Dr. Guillermo Grenier — Hillary Clinton roundly trounced Trump (or made gigantic gains on him) in deep Cuban enclaves such as West Miami, Hialeah, and Westchester, which contains the highest concentration of Cuban-born people in America.

"In Miami-Dade County, where one of three residents is Cuban-American, Clinton won by 30 points, 64 percent to 34 percent, an 81,688-vote improvement for Democrats from 2012," the report says.

In Miami's Cuban enclaves, Trump barely eked out wins in cities Mitt Romney won with ease four years ago. Hialeah typically turns hard-right every election year — Romney won the city by 9 percentage points in 2012. But in 2016, Clinton and Trump were effectively tied.

In West Miami, Democrats did 13 points better than they did in 2012. And in Westchester, Democrats picked up 14 points. (Trump barely won all three towns.)

The report says Clinton received a fairly average number of votes for a Democratic candidate in those cities. Instead, it says, Trump nearly blew a bunch of sure-fire wins. At the precinct level, the study shows, Clinton performed 11 points better than Barack Obama in majority-Cuban precincts in 2012.

Latino Decisions, a public-opinion polling service, also found that Clinton won the majority of Cuban-Americans nationwide — the first time a Democratic presidential candidate has ever beaten a Republican in that demographic.

Midway through the election season, Trump took a hard-line stance on the Castro regime. He likely did so to curry favor with older Cubans in Miami, who tend to vote Republican. But according to Sopo and Grenier, that policy shift did almost nothing to persuade skeptical Cuban-Americans to "make America great again." (The move did, however, earn him the first-ever nod from the Bay of Pigs Veterans Association.)

"With Clinton making significant gains in Cuban-American neighborhoods; polls showing that majorities of Cuban voters support engagement policies; and no sign that Trump’s Cuba 180° helped him, there is simply no evidence to back up the claim that Obama’s Cuba policy hurt Democrats or that a hardline stance benefited Republicans," the report says.