Coral Gables resident Ilaria Pezzatini found a dead manatee near the dock of her home this past weekend. Photo courtesy of Ilaria Pezzatini
Ilaria Pezzatini likes to go out on her boat on the weekends and pick up garbage the tide washes up around her waterfront Coral Gables home — water and soda bottles, bags full of trash, Styrofoam cups, straws, and other plastics.

While she and her dad talked and lounged by the pool this past Saturday, they caught a whiff of something awful. But it wasn't trash. Wedged between her boat and the dock, Pezzatini found the decomposing carcass of a juvenile manatee floating on its back. She says the manatee was about four feet long and appeared to have been dead for several days.

"This winter we have seen a lot of manatees and manatee families come up and down the canal," Pezzatini tells New Times. "I recall seeing recently a mom with a baby. I don't know if this was the same baby manatee."

Pezzatini says she has recently seen Jet Skis, party boats, and other vessels going far too fast on the waterway. She'll sometimes join a chorus of neighbors shouting over the engines to tell boaters to slow down.

"The Jet Skis don't have a propeller, but they can injure a manatee by going too fast," she says. "They're not respecting no-wake zones and they're not being careful about wildlife."

Boat sales increased during the pandemic as people sought to get out on the water and entertain themselves after months of staying at home. JB Diederich, one of Pezzatini's neighbors, says he thinks boaters need to be better informed of waterway signage, no-wake zones, and marine life that can be hurt or killed on the water. Outside his home, he has a sign facing the canal to alert boaters of manatees in the area. Diederich says he and his neighbors consider themselves stewards of the canal and try to be respectful of it.

"We’re not against people using the waterway," he says. "We don't own it. We just want people to look out. Be careful and respectful of the waterway because of the creatures that live in it."

It's unclear if a boater hit the baby manatee or if it died of some other cause. Pezzatini says she called the Florida Fish and Wildlife Conservation Commission's (FWC) wildlife hotline to report the death but was told the agency couldn't recover the creature to perform a necropsy — an autopsy performed on an animal — because it seemed too decomposed. Because Florida's manatee population and the demand for necropsies have both grown, wildlife biologists don't determine a cause of death for each one.

The most recent figures available from the state show that already this year, at least 211 manatees have died in Florida, including 12 killed by watercraft. Others died of natural causes or because of cold stress, which happens when the creatures can't reach warmer waters in the winter months. To date, the FWC has reported seven manatee deaths in Miami-Dade in 2021. 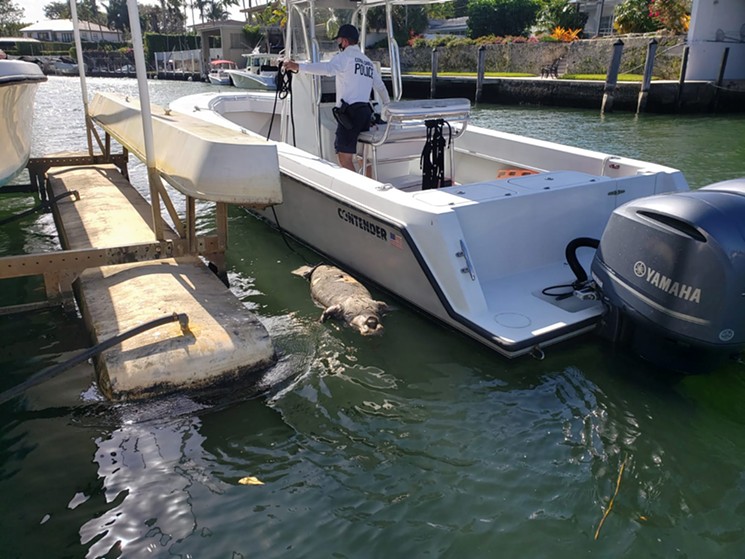 "We helped the police officer tie a rope to the tail of the manatee, and he started slowly towing it away," Pezzatini says. "I've never really seen such a horrifying scene. For me, it was just heartbreaking."
KEEP MIAMI NEW TIMES FREE... Since we started Miami New Times, it has been defined as the free, independent voice of Miami, and we'd like to keep it that way. With local media under siege, it's more important than ever for us to rally support behind funding our local journalism. You can help by participating in our "I Support" program, allowing us to keep offering readers access to our incisive coverage of local news, food and culture with no paywalls.
Make a one-time donation today for as little as $1.